As soon as dining rooms shuttered on March 16, Petra and the Beast began running an operation with curbside pickup Wednesday through Sunday for to-go fare, charcuterie boards, and larder goods that climbed into the dozens of items. Their fermentation and preservation tricks were on full display. Missing, however, were the high-end Saturday tastings that have always been a signature, an experience that had its own following and defined chef Misti Norris’s style. On tasting menus she and the team pushed forward, creatively—but it had been definitively an intimate, indoor thing. How, in this time of survival, might they return?

Over the past month, Norris and her team at Petra and the Beast have been working to create a space like no other on the dining scene in Dallas. The resourceful, creatively brazen chef and her team are making use of the carport that juts out from their vintage gas station. They transformed it into a plush, bespoke outdoor dining area where the crew can, once again, host guests for tasting menus that have defined the culinary experience at Petra. 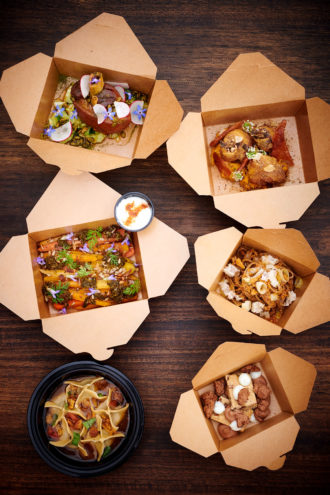 “I have to say, it really does feel like we reopened again. When we first opened Petra, it was like, ‘This is the idea that we have, and we’re just gonna evolve with it.’ And [at the time] we weren’t sure it was gonna work out,” says Norris.

And now again: “It truly does, it feels like starting the restaurant all back over, or even starting a new restaurant. It’s what we’ve done before, but at the same time so different.”

Part of the difference is the variables: the weather, the heat, the host of uncon-
trollable factors when one is envisioning seating diners outside. The East Dallas restaurant discussed what they themselves would want in terms of comfort and safety.

The task then: Make of a carport with cracked concrete an intimate dining room with the comfort of an elegant living room. Up went a shade cloth that blocks 90 percent of the light, but allows air flow, with two feet at top and bottom. The 17-by-17-foot space itself is demarcated with 2-by-4s and boxes, and between them lie lush rugs over concrete painted with black matte paint. They installed fans and twinkling lights. And from 8 until 11 at night, with only a few cars going by on one-way Haskell Avenue, it became an oasis. From what was formerly the pickup zone for curbside orders they created a space where little end tables hold wine buckets, but also sanitizing stations with gloves, plastic bags, and sanitizer spray. (The greatest expense was the fans that blow across the space, Norris says. See the Instagram video we’ve shared below with permission.)

“It truly does, it feels like starting the restaurant all back over, or even starting a new restaurant. It’s what we’ve done before, but at the same time so different.”

The new tasting room, like a Bedouin oasis, rises out of the night. But if it is appropriate to the weather, Norris learned, the menu had to reflect that, too.

After the initial week two weeks ago, she realized she had to completely overhaul the style of the menu.

This means she’s pivoted to cold or room-temperature dishes, gracefully confronting the extra finessing required to let the layers and complexities shine. “You have to pay attention to the integrity of the product,” she stresses, because you’re not manipulating it much.

Yet the complexity is surely there. In the first tasting’s dish of sunflower four ways, the team candied the petals and confit’d the hearts until they were creamy and unctuous, and then made a savory porridge of the seeds. See also: a near chocolatey, spiced, dehydrated avocado ragout that was part of the pork entrée, almost in a mole style.

But the summertime shift means much less use of fats, especially animal fats. A focus on lightness, too, allows Norris to focus on seafood, supporting a local Gulf industry that’s struggling in a way that plays into their philosophy.

And now it’s all mousse and finesse and delicate plating of gossamer or shattering textures, with creams and emulsions and rondelles of daintily ombréd pork (the lone entrée is still warm) and a parting mignardise.

Norris feels strongly that the return to tastings is not something she would have done alone. Everyone had to feel comfortable. “It wasn’t just my idea to push forward with it,” she says. “I needed my whole staff behind it, and if they weren’t, we absolutely weren’t gonna do it.”

The idea emerged in response to a need, though. They saw that guests were craving a dining experience there. They thought about the psychology of it for guests. But the upside is what it has meant to them as well. “It was good, mentally, emotionally, to see our guests,” she says. “That’s something we all really crave to be part of again.”

In this scene, in this moment, how it feels to get back to creating in this sequenced way is complex. As are the logistics of safety. In a speech before the tasting commences, Norris comes out (interaction will be minimal to keep everyone safe) to explain the sanitizer trays at each table and that guests can go indoors for restrooms. And “I let them know, ‘Thank you,’ especially for coming outside,” she says. (And always a debrief at the end of every service touches on each.)

I see in this effort, an effort launched with DIY energy, everything Petra and the Beast has been about. After all, the restaurant emerged on the basis of spunk, asserting, “Here’s a gas station; let’s give this a try,” as Norris puts it, referring to the building’s past.

Here again, we see them as trailblazers, joining others on the scene to create a new normal/abnormal. I see a commitment “to create this experience that we feel is lost for the moment.”

And above all, a willingness to rethink.

Like many, Petra and the Beast has also been giving back. They have been delivering food to the Genesis Women’s Shelter weekly and Norris is working to try to bring a chapter of the Power of 10 initiative, a fundraising effort that began in Washington, D.C. and has since spread, to Dallas.