People despair—or give you blank stares—when you start talking about pairing wine with Asian cuisine. Perhaps it has been too long reserved for Euro-centric fare, with no attention given to the marvelous things that can happen between Asian food and wine. But have you noticed the beverage list at Khao? During the pandemic, even as they shifted to takeout, then shuttered, then moved again to takeout and popup hosting and a Khaovenience store in a dynamic whirlwind, Donny Sirisavath and Thanh Nguyen (his de facto beverage consultant) snuck in and introduced a bottle menu that should have you feeling pretty confident about what to do with those bites of palm sugar-filled sakhoo or bowls layered with funk and brightness.

Sirisavath and Nguyen met almost a decade ago, and Nguyen remembers a group bike ride early on, when Sirisavath powered up a hill with a flat tire rather than admit defeat or hold up the group. “I knew from there that Donny could handle anything,” Nguyen says. The duo formed a bond over talking about food—at home, in restaurants, and shoulder to shoulder in bars. When Sirisavath held his first popup, at People’s Last Stand, serving the Laotian boat noodles and bites that would become the electrically popular, award-winning Khao Noodle Shop, Nguyen was his DJ. They’ve been side by side since then.

It only stands to reason, then, that Nguyen, who now works at the natural wine shop Bar & Garden, would be the one to help develop a beverage list for the noodle shop that had previously been BYOB.

“People don’t think of wine and Asian food,” Nguyen says. “It’s always been historically difficult to pair for most people. But now all different types and styles of wine makes it kind of easier,” he says. “Plus, exposure through social media and literature have gotten better.”

One of the first, easiest go-tos for the beverage list was sake, which he likens to the fermented rice wine you would drink in Vietnam or Laos. (Currently, the list is set to includes eight to 10 wines at a time, so far in twos—two sakes, two pétillant naturels, two traditional-method wines). 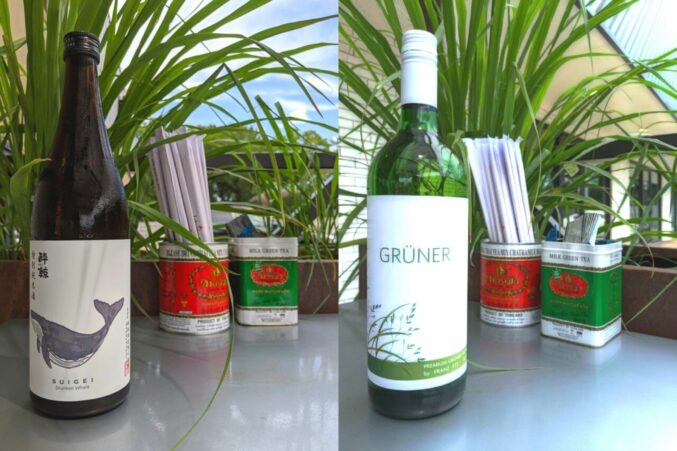 At Khao, the list would not be complete without Beer Lao, the icon of drinking culture in Laos, the necessary accompaniment to any barbecue or road-side noodle-stall tabletop full of bowls. But Nguyen also recommends the bubbles and slightly funky flavors of low-AVB, effervescent pét-nats. Their more unusual flavors, the product of wild yeasts, are a plus. And with their light sourness, like sour beer, he considers them “the brother, sister, cousin to a beer in the wine world.” Think of pairing the funkier pét-nat with the funkier dishes—dishes with fermented fish sauce or aged meat, like Sirisavath’s addictive Lao sausage.

The bubbles of a beer or pét-nat, and the chill, makes it ideal now.

What to keep in mind with drinks and Asian food.

Pro Tip 3: Think outside the “bold red” box. Chilled reds and skin-contact “orange” wines are your better bet, here — lighter, less tannic, and happier to play nice with the food.

Nguyen will add some chillable reds to the list for summer—he’s specifically looking for the light, bouncy effects of carbonically macerated reds, which do well at a lower temperature—and orange (or skin-contact) wine, where the skin is allowed to stay on during fermentation, adding flavors without the tannins that might fight with the complexities of the food.

The first time Nguyen saw “legit wines and legit Asian food” paired together was in San Francisco, he says, and he’s since followed (and cheered) the trend on both coasts, in cities like Los Angeles and New York, where high-end and trendy hole-in-the-wall restaurants alike have been putting together beverage lists that function as an education in the possibilities.

He would love to see drinkers experiment. If you’re pairing at home, “it’s not as complicated as you think,” he urges. At Bar & Garden and Khao, he enjoys his advisor role: anything he can do to advance the movement is worthwhile. People should feel empowered, he says, to “break the paradigm that [says that] Asian can’t be enjoyed with wine.”