It remains an unpredictable time to run a restaurant. Last week, figures from the U.S. Bureau of Labor Statistics showed that the “largest employment decline occurred in leisure and hospitality, where employment plummeted by 7.7 million over the month [of April], or 47 percent.” (More localized data from the BLS is forthcoming, but the Texas Restaurant Association estimates that about 61 percent of the state’s food industry workers have been laid off or furloughed.) That’s a significant chuck of job loss, yet only 8.9 percent of Small Business Administration’s Paycheck Protection Program funds went to the accommodation and food service subsector.

The National Bureau of Economic Recovery released early evidence from a recent survey of small business that says, “The restaurant industry seems particularly vulnerable to a long crisis. Restaurateurs believe that they have a 72 percent chance of survival if the crisis lasts one month, but if the crisis lasts four months, then they give themselves only a 30 percent chance of survival.”

The survey also showed “more than 13 percent of respondents say that they do not expect to take out CARES Act PPP loans because of the application hassle, distrust that the federal government will forgive the loans, or worry about complicated eligibility rules.”

In April, we reported that Texas received the most aid from that first round of PPP. Now in its second round of funding distribution, it seems some Dallas restaurants have received their loans. It’s an encouraging sign: more cash is great for those looking to survive this pandemic-related economic crisis. But there is still a long list of questions from these business owners. We spoke to them to get a sense what of what this injection of money means for their small Dallas restaurants. Meanwhile, three of them—plus a local bakery—additionally received James Beard Foundation grants.

The PPP can be helpful for restaurateurs who can bring back numerous employees. In the case of the vast holdings of 80/20 Hospitality, founder Elias Pope says, “We have now 700 people we’re paying who are not on unemployment and are not only getting what they would have made hourly, but tips, too.”

But even then, it doesn’t address the industry’s notoriously slim margins, especially at the currently allowed 25 percent capacity. “I love what it’s done for our team. But it doesn’t help our restaurant group in terms of profitability,” says Pope, “though it’s more cash in the ecosystem.”

In order to receive loan forgiveness—a proposition that’s not guaranteed—the loan must be used within eight weeks. A quarter goes toward rent, utilities, or other approved expenses, and the other 75 percent for payroll. With such calculations, it’s perfectly reasonable to be cautious of incurring any kind of debt. “PPP is helpful,” says Jennifer Uygur, who owns restaurants Lucia and Macellaio with her husband David in the Bishop Arts District. “It’s not a silver bullet.”

For the Uygurs, the process itself of applying for PPP loans was arduous. They showed up at their long-time bank with a variety of documents (“because nobody really knew what we would need,” says Jennifer), but were denied their request to file based on the fact that, as a fiscally solvent small, independently owned business, they had no previous loan record with the bank. (The irony is not lost on them.) Jennifer speaks to the intense pressure to file, when she knew others were filing, the pool of resources was limited and the shrinking window of time. They found two smaller banks, which secured loans for both Lucia and Macellaio.

Then, it was a matter of understanding the logistics and stipulations.

For Janice Provost of Uptown restaurant Parigi, a PPP loan she received in April allowed the veteran chef to put all but four of her employees on payroll. “We’re absolutely thrilled to have it and it’s a huge weight off our shoulders to put the rent issue on the back burner for a minute, there’s stipulations on what we have to use it for,” Jennifer Uygur says.

The lack of guidance or clarity about the PPP, Jennifer Uygur says, has been infuriating and frightening.

“No one knew anything. We didn’t even know what we were signing up to get.”

A webinar hosted by the Texas Restaurant Association last week, with TRA President David Denney and a representative from a small bank in Florida that has written many PPP loans has been the most helpful source of information, says Provost. The webinar, which came the week after the loan came through, did clarify “somewhat,” Provost says, and from there came the suggestion to find alternative work for existing positions.

“You’ve got a busboy, and folks whose typical job descriptions don’t exist right now. A bartender: I don’t have a bar that’s open right now. So we’ve been doing a lot of things that have been outside of the norm and the box.” A busboy and bartender have been helping to replant and tend the community garden plot Parigi holds with the nonprofit Promise of Peace in Trinity Groves. A dishwasher has been power washing and making repairs; a front-of-house employee is fielding calls.

“There is no ‘Pay your vendor.’ There is no other way to use those funds. And it’s extremely confusing. There is no real clear instruction,” she says. “The hope is that it’ll be forgiven.”

“Some people out there are saying well, ‘Oh, they’re gonna just forgive everything.’ Well, I can’t function like that. David and I had to sign the legal document that says this is a loan,” she says. “What if the rules do change? So how do you decide what to do with it? That’s the hard part. What we really need is guidance and something that comes out in a timely fashion.”

“In order to be forgiven, I can’t buy inventory. I can pay rent, but I can’t use it to prepay rent—they say only in the eight weeks. So I can’t even say, ‘Thank god, at least I don’t have to worry about that.’” 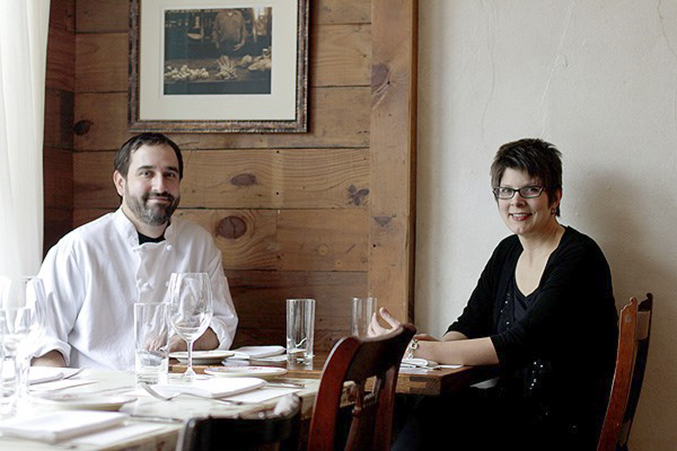 For the Uygurs, the loan money brought on agonizing decisions: both the ethical implications and logistical realities of bringing employees back on payroll. “My worst fear would be to say everybody’s back on payroll and then in eight weeks I don’t have a sustainable job for them. Have I helped them or hurt them? Can I give everybody a little bit of money? What happens if they come off unemployment and then they have to go back on again?” she asks, concerned that she could harm or complicate her staff’s unemployment status in a mere eight weeks’ time. (Navigating the labyrinth of Texas Workforce Commission phone lines is after all, as one former server put it to us last week, “like having a part- to full-time job to find the right information and find the route to be heard.”)

Add to this the impossibility of safely bringing back a full staff into a tiny space like the quaint Lucia, where, in order to open for curbside pickup this week and respect 25 percent occupancy, they have one person making pasta in the front dining room and two cooks in the kitchen. “How do you bring back 14 people into a tiny space? I wish I had a better way to get around it.”

In the midst of this, the James Beard Foundation created a restaurant relief fund which has distributed “$4.7 million to coffee shops, diners, cocktail bars, barbecue joints, chocolatiers, and fine-dining spots from coast to coast,” according to a release from the food organization. To secure a $15,000 grant, the Uygurs report it proved a much quicker process: an email, an application, an email back. It also offered more flexibility. “I can go buy inventory. Because we cleaned out our entire walk-in.” The grant allows them to buy food and wine and pay invoices.

Like the guests who bought gift cards and ordered curbside pickup, which allowed the Uygurs to cover health insurance for their furloughed employees for April and May, the grant helps as one of the “cobblestones” on the path to survival.

Clyde Greenhouse of Kessler Baking Studio is a recent James Beard grant recipient. (He also landed on this year’s James Beard Award semifinalist lineup for Best Baker for the first time.) “The grant was probably the best news I’d received since all of this actually begun,” he says. His Dallas microbakery is just a small team of five, but it’ll help keep everyone on staff and, he says “it also ensures that our customers will have a place to come back to—a happy place to come back to—at some point.” For now, he has the money to continue curbside pickup, delivery, and even expand his baked good offerings.

Greenhouse applied for a PPP loan and remains in limbo. Early on he made several phone calls to check his status. “One time I was number 1,144 on hold,” he says, and after two hours he gave up. “But I have gotten through to them since then. I don’t know if I’ve been approved, or anything, I just know that it’s ‘in process’.”

Provost, too, counts herself among the Dallas business owners who received a James Beard Foundation grant. The grant application asked applicants to tell their story, Provost says. They were able to detail their impact on a neighborhood and any relevant philanthropic work. The majority of the grant funds have gone to pay purveyor invoices, as well as the new and unforeseen expenses associated with pivoting to takeout like new disposables and paper bags. “The fact that it is to use the funds however we need to is a huge weight off our shoulders.”

Everyone’s already in survival mode, on the cusp of fatigue, but the grant felt like “getting a huge hug from a friend who says, I believe in you, I trust you,” she says.

“I look at it as, we’ve done whatever we needed to do. And we’ll continue to do that as long as we stay standing,” Provost says.