Nick Badovinus is re-entering the arena. The prolific restaurateur reopened his opulent Design District steakhouse, Town Hearth, last night as well as two Neighborhood Services locations—on Lovers Lane and in Addison. His latest restaurant, Desert Racer in Lowest Greenville, will partially return tonight in the new guise of Vantina, a pop-up concept that borrows from Desert Racer’s Baja-inspired aesthetic and menu. Montlake Cut will make its comeback next week. Off Site Kitchen, his cult-following, minimalist burger joint in Trinity Groves, won’t reopen. (Its lease was up in June. He confirmed the closure today.)

In March, Badovinus closed all of his restaurants and, in the same week, he was the first restaurateur to report a case of COVID-19 in one of his staff members. The time shuttered allowed the management team to revaluate. Badovinus is rethinking the space in Highland Park Village that will no longer hold his pizza joint Perfect Union, but rather something more in his premium-protein-centric wheelhouse.

The piece I wrote about Desert Racer in the May issue of D Magazine was a non-review of the Lowest Greenville restaurant that had only been open two months. When I spoke with Badovinus then, in mid-March, he stood on the brink of unknowns no restaurateur wants to face: the wasteland of the parking lot spoke volumes, and the Wes Anderson playground of Desert Racer stood empty, fires out, non-management staff laid off. It became, instead, a story about what he had built before the world fell apart.

“Whatever comes out for the restaurant business on the back side of it is going to be completely different from what it was before,” he told me. 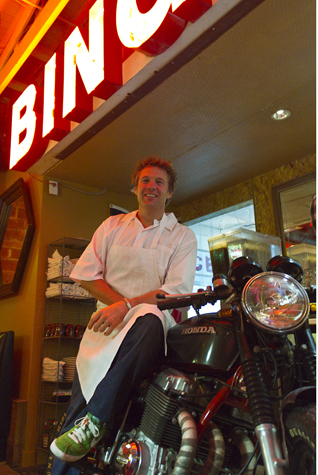 Nick Badovinus, photographed here in 2013 at now-closed Tried and True.

Already, he was seeing the writing on the wall. He was thinking about a brave new world with distance requirements and bar stools fixed to the ground and revised occupancy codes. He was saying he didn’t know how many of his restaurants would come back. And in what form. He would be stringently “evaluating the viability.” The footprint of Desert Racer is the largest of his concepts, stuffed with Southwestern decor, but also conducive to reimagining—the kind of place where he could envision almost a food hall, or picking and choosing elements from his FlavorHook portfolio perhaps.

Today, as restaurants have been permitted to open at 25 and now 50 percent, that’s exactly what’s happening. Desert Racer will open as the pop-up concept Vantina, using its vast patio to offer hits just one step off from the Desert Racer menu. Chips and salsa, elotes, shrimp cocktails and crispy tacos. The signature fish penchant played out in Baja-style fish tacos; the fire-kissed proteins like oak-smoked chicken that, when I last had it at Desert Racer, conjured memories of standing around a campfire; what I remember as deeply flavorful pork shoulder el pastor with pineapple; and borracho brisket. If Nick Badovinus were to reinvent himself, this is exactly what I would expect: something freewheeling, with frozen margaritas and highballs. An absolute signature, but also cognizant of the times. Like many pivots, this one is business savvy.

“We’ve always internally referred to this area as the Vantina,” he says of the patio with an Airstream trailer that will constitute the entirety of the dining space (a portmanteau of van and cantina). Already, barn doors separated it from the main dining room, and it benefitted from its own bar. “So we thought it would be the best way to reanimate the space. And the idea of popping up in our backyard being really kind of fun.”

The challenges of reopening Desert Racer all at once were “too numerous to go into,” he says. But the restaurant space was also vast enough that opening only the patio was viable. And in a resourceful combination of forces, both Off Site Kitchen’s flattop and its veteran grillmaster have migrated to Vantina, so those craving the Stock Cheese will find a version of it, though with a few additions. “It’s a little bigger. It’s a third pound. But in terms of raw protein spec, it’s very similar, and in terms of methodology, it’s identical.”

As for the atmosphere of the patio pop-up, in this time of uncertainty, it may attract diners seeking an outdoor venue. Badovinus is cognizant of what diners may crave. “I think Vantina presents a legitimate escapist opportunity. I know this is the closest I’m going to get to a vacation in a while. In terms of leaving Dallas and getting on a plane,” he says. “So we wanted to have something that at least felt like you were going somewhere.”

When I ended my essay on Desert Race, its epic “Last Gas” sign in the entryway seemed a prophesy. Now it’s perhaps rewritten, with a different writing on the wall: a refueling for one of the city’s biggest-name restaurateurs.

“I think it’s really important to keep the new stuff churning. Keep bringing ideas. Keep creating things,” he says. “We’ll see what happens with Vantina. It’s just a place that brims with optimism and sunshine and brightness—and we’re just going to think about all the ways we can expand on that.”

Behind the Scenes of a D Magazine Cover Shoot