Lowest Greenville has been justifiably quiet in the wake of the city’s coronavirus measures. No more M Streets-dwelling SMU alums sashaying into Steel City Pops in athleisure, no couples filing into Teppo for robata-grilled yakitori.

The normally well-frequented, boisterous stretch has gone silent. Save for a group that toils in the formerly hopping HG Sply Co., its presence discernable only in the evenings from the back parking lot. Where once there were rooftop-bar shenanigans, now something entirely more serious is occurring. Until recently, they worked while we played. But the times have changed all that. It’s time we drew back the curtain.

Every weekday since March 23, Evelyn Aloupas, Denise Apigo, and Randall Braud have filed into the kitchen of the now-shuttered HG Sply Co. on Lowest Greenville to cook for their own. This is the skeleton crew that puts together the nonprofit Heard That Foundation’s Staff Meal program, which launched on the Monday following the city-mandated ban on in-room dining. Such a move, however necessary for the health of diners and workers alike, devastated the service industry landscape for those who were let go from both front-of-house and back-of-house jobs.

For the most part, this group got to know each other as chefs at Bullion, where Apigo trained Aloupas and both overlapped with one of Heard That Foundation’s cofounders, Will Salisbury. At the French restaurant they banded together for family meal, the tradition of cooks taking a break from the line to assemble for a quick, off-the-cuff meal before the dinner shift begins. Now, they’re cooking family meal for their “brothers and sisters” on a larger scale and in the face of dire need.

They’re chefs—they couldn’t sit on their hands. As they saw those in the service industry suffer around them, they leapt at the chance to get to work, joining a collaboration that Salisbury knitted with HG Sply Co. owner Elias Pope. “People in the industry don’t know what’s going to happen tomorrow with their families,” says Aloupas. “Everybody in this industry’s hearts are broken right now.” In the midst of a crisis, they needed an outlet, and people needed meals. “It helps us as much as it helps the community,” says Apigo. “It’s devastating to see [everyone] hurt so much.”

Monday through Friday, three shifts of three hours cover a span of noon to 9 p.m. For safety reasons, three volunteers arrive. They get their temperature taken and answer questions. They sanitize: a timer goes off every 30 minutes, reminding them to wash their hands. They pull from the walk-in, go through previous orders, and prep the menu for the week. They sort tasks and disperse.

Staff Meal by the Numbers

What it takes to feed those who need food.

Meanwhile Salisbury is behind the scenes, garnering and orchestrating donations from Gung Ho and HG Sply Co., local purveyor Chef’s Produce, Texas Fungus, and other growers, farmers, and ranchers who had inventory they needed to unload in the wake of their restaurant outlets shuttering with a resounding clap. Monetary donations have also fed a rainy-day fund for supplemental orders, such as purchasing protein in mass quantities. Around 5 p.m., just before dinner “service,” the volunteers regroup and begin portioning. Meals are loaded onto metro racks wheeled out to the makeshift table where chalkboard signs point to the pickup zone in the restaurant’s back parking lot.

They leave around 10 at night. 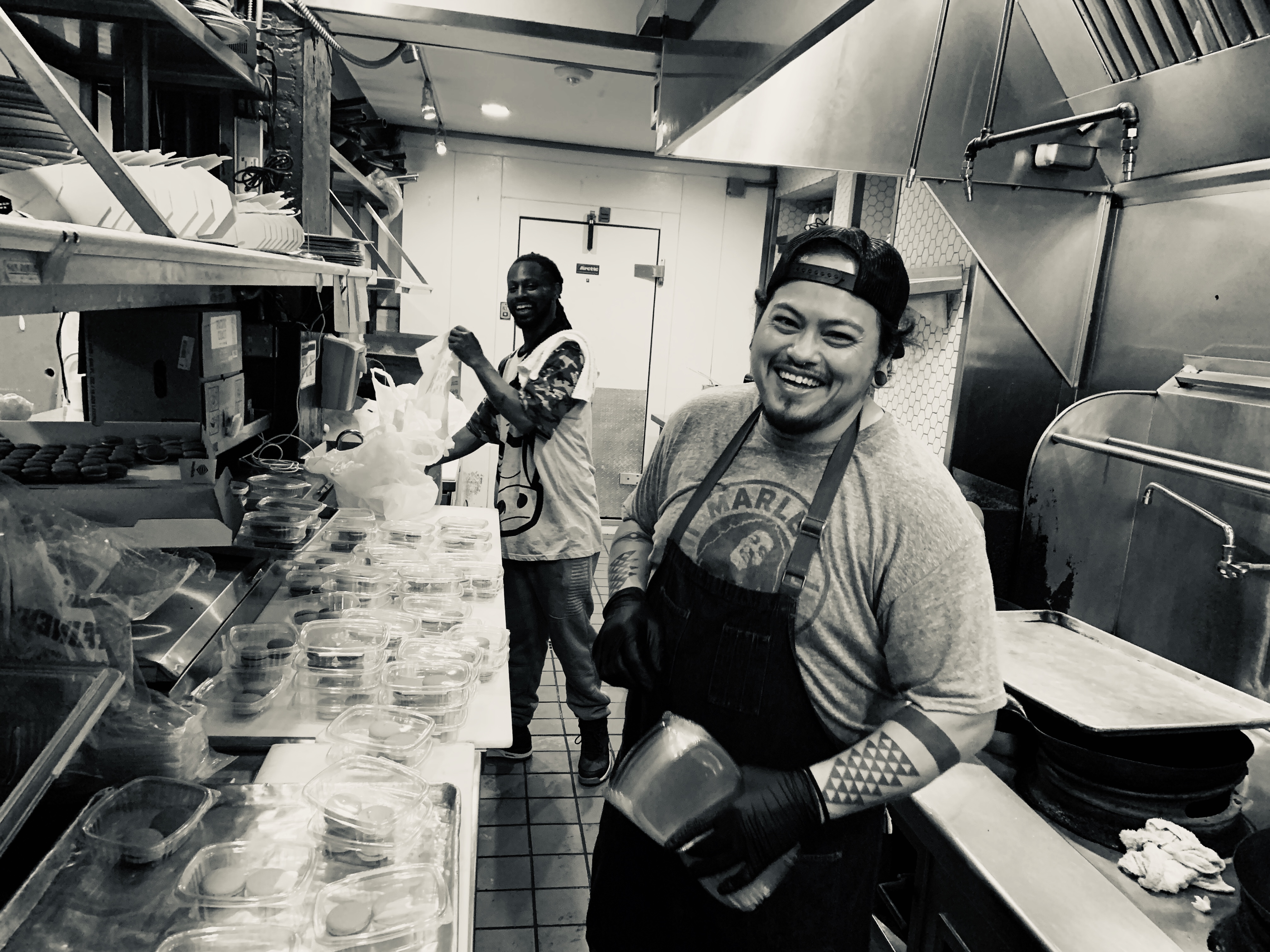 Heard That Foundation was hoping in its second week to ramp up production to hit 400 meals. By now, they’re cooking for 700. “We don’t want to have to turn anybody away that’s hungry,” says Apigo. “The longer this goes, the more [we] see a need for it,” she says, as she looks at a landscape in which service industry folk are cobbling together delivery jobs or waiting for unemployment checks.

Staff Meal reveals “how little safety net there is for everybody—all the safety nets that either don’t exist or have failed. This affects so many, through no fault of their own.”

There’s love and solidarity in the meatloaf and in the massive batch of chicken adobo. “We’re all just reaching back for comfort food,” says Apigo. They’re “coming together and being creative” in ways that feel ideal, Braud says, trying to soothe in ways that they themselves would want to be soothed. So Aloupas’s meatloaf. Or the chicken adobo, which Braud planned with 70 to 80 pounds of chicken leg quarters, made Apigo emotional (she’d never made it on that scale—the dish her mom would make when she felt low).

“Yesterday I made 50 pounds of meatloaf, but it wasn’t enough,” Aloupas says of the first week. “It should have been 100 pounds of meatloaf.” She was feeding others from her Italian roots. Every meal is a square meal, yes, but also one that makes someone feel good.

“There’s a realistic need to get our service industry folks fed,” says Braud. “I just want to make it through the day, get people fed, and worry about tomorrow. And then tomorrow and the next day.”

Striving for Normal, Whatever That Is

For the team, it’s about staving off the panic. They all speak to the importance of the camaraderie they forge. It’s about “trying to get to as close to normal as we can,” Apigo says, as they talk, laugh, and work in the space that shields them momentarily from the outside disaster. “We’re scared, but we’re together,” Aloupas says. Before this, they were in their pajamas. Just put me to work is Apigo’s sentiment. “I think a lot of the heartbreak is not being in the industry that we’ve sacrificed for,” says Aloupas. Nobody knows if the restaurant industry will ever be normal again.

The need for Staff Meal reveals “how little safety net there is for everybody—all the safety nets that either don’t exist or have failed,” says Apigo. “This affects so many, through no fault of their own.”

“I want to stay hopeful, and hopefully it brings some change and some light to everything that we need. I’ve been following a lot of the activism in the industry, [people] reaching out to Congress, talking to them about how we need help. In that vein, I feel very hopeful that those bigger, more powerful voices are going to keep pushing for something… There’s the danger of forgetting about it. I’m a little cynical that people are gonna be like, ‘Okay, back to regular programming; everything’s fine.’”

That, to her—and to many of us who write about food—would be the greatest lost opportunity.