January 4 would’ve marked the 47th anniversary since the Grape first opened on Lower Greenville, but with one final toast it closed last October. Earlier this week, developer and former mayoral candidate Mike Ablon bought the building it was in. (He has promised not to tear anything down: “That building should still be part of the fabric of Greenville Avenue,” he told The Dallas Morning News.)

That cozy little restaurant meant a lot to a lot of people. Picture a young man there. He’s wearing an oversized sport coat and pulling out the chair for his nervous soon-to-be girlfriend. He doesn’t know it yet, but he’ll burn half of his paycheck on this first date. That young man was me, and 12 years later it’s still one of the better decisions I’ve made.

It’s hard to let things go. So I reached out to a few Grape patrons to hear how it featured in their lives. “People should know how important that little brick and mortar was to us,” one said. Some of them were cooks, some were neighbors, many of them have since left the city, but everyone shared the feeling that Lower Greenville was a special place.

Lynn Ross can trace it back to a single night. “I’m fairly certain my daughter was conceived the first time my husband took me there.” She can remember the cheese course and the entree: roast pig with slaw and potato salad. “I wish I could remember the wine,” she said, “but I just remember it being so, so good.”

In 2009, Lynn and her husband were new to Dallas. They had a young son, and were not regular patrons of Greenville Avenue. “That was kind of a scary place back then,” said Ross. “But my husband found out that this little restaurant was putting on a dinner event for a charity. It was the Feast of Saint Martha, one of my mother’s favorite saints.” The restaurant kept a small statuette of the patron saint of cooks and servers by the register.

The Rosses have since moved away to Seattle where her husband works as a software engineer. Did she ever think about bringing her daughter back to the Grape? “That would be a tricky discussion to have with an eight-year-old,” she laughed, “but I guess it’s off the table for now.” 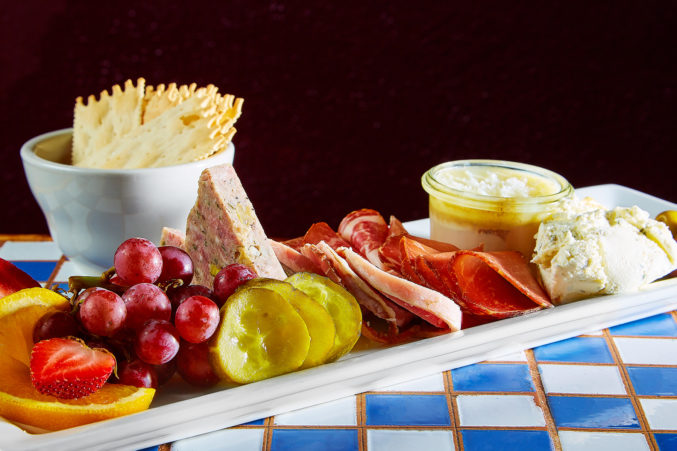 A classic charcuterie spread at the Grape. Photo by Kevin Marple.

“I’ve worked in kitchens for more than 30 years, and I don’t know what I’d rank higher than the Grape,” said Ari Asch, who began working at the restaurant in ’91 before it expanded its kitchen. “I was a young cook, and pretty soon I was learning to make the most amazing demi-glace and lamb shanks in the tiniest kitchen.”

Back then, the community of restaurants on the 2800 block of Greenville Avenue was a kind of family. “We all knew each other. As a cook, you could walk across the street and pick up a shift in the kitchen at Terilli’s or the Blue Goose.”

A lot of cooks wear their scars like badges of honor. Asch is no different. “It was Valentine’s Day, our second seating of the night, and I was caramelizing crème brulees like a beast.” He got a palm full of scorching hot sugar. “Man, we had so much longer to go, I just put a bandage on and kept at it.” He recovered, and even when he left the restaurant as a cook he found himself returning again and again. “I could tell you a hundred more stories.”

For five years, Stoney Savage operated a wine shop next door. “We used to do these paired events,” he remembered. “We would hold wine tastings in our place, then we’d take our favorite wines over to the Grape and pair them with something from the kitchen. It was a lot of fun.”

Savage, a professional standup bass player, would frequently perform a few jazz numbers in the restaurant along with his wife Diana Savage, a singer. “We both go way back with Kathy and Charlotte.” (Kathy McDaniel and Charlotte Parker were the original owners of the Grape.) “Sometimes if they were low on stock, they would just come over and grab a few bottles that they liked.”

In 2011, the Savages opened a place of their own, Stoney’s Wine Lounge in Lakewood, where customers can pair cheese and charcuterie with wine from a deep bottle list—some going as far back as a 1989 Bordeaux. Diana still sings Edith Piaf or George Gershwin tunes on weekends. “We loved the neighborhood feel of it,” said Stoney, “and we wanted to continue that.”

Some people grew up with the Grape. It was a place to return to for celebrations, anniversaries, or just to pass on a singular and wholly necessary dining experience to the next generation. “I was 13 years old when my parents first took me there,” said Austin Pletz. “It opened my eyes to what food could be. I wasn’t a picky eater after that.”

Before his mother died in 2011, Pletz was able to take her to the Grape one last time. “I was a wreck,” Pletz said. “She died from cancer on Halloween, and a year later I was having a real hard time.” That’s when a friend of his dragged him out of his house and planned a whole weekend for him, including a night at the restaurant where they drank a bottle of Veuve Clicquot. “And the whole staff took care of me,” Pletz remarked. And so began a new tradition: Every Halloween he sits at the bar and drinks a glass or two of champagne in her memory. “This will be the first year I haven’t gone back. I’m really going to miss that place.”

Chef Brian Luscher, who bought the Grape with his wife, Courtney, 12 years before its closure. Photo by Kevin Marple.

One of the most remarkable aspects of the restaurant was how much it felt like a neighborhood spot while maintaining the kind of sophistication usually reserved for jacket-and-tie destinations. Barbara Davis, a registered nurse, would frequently arrive straight from work in her scrubs and be welcomed by a wait staff who she had grown close to over the years.

Davis and her wife moved from Austin to Dallas in 2004. She quickly found the Grape, which became her go-to for any occasion both good and bad.

“I could be heartbroken when I came to the Grape,” Davis said. Whether they’re tending to traumatic injuries or the death of a patient, critical care nurses witness the worst moments in people’s lives. “To treat myself, I would come down to Greenville for dinner, chat with Matt, our favorite waiter, and eat something to take my mind off what I’d seen.” There wasn’t a dish on the menu she didn’t love. “But I’d always finish the night with the crème brulee.”

Davis will have to find a new place to get her mind off things. Austin Pletz will toast to his late mother elsewhere. As for me, I’ve always counted on the Grape as the spot where I’d propose to a girl of indeterminate luck someday. Now I’ll have to go to a bridge or something.

What do you remember? Share your memories in the comments below.