Last week, several days after an EF-3 tornado blazed a trail through North Dallas, Sarah Rañola prepped the filling for the deep-fried Filipino snack known as lumpia. The power couldn’t go out, she said, as her girlfriend, Rachel Trammell, finished cutting what would be hundreds of ube rice crispy bars, tinged purple with purple yam (that’s ube) extract. As they stood in their kitchen, it was almost a war cry: “Can’t lose power tonight!”

It was two days before the duo’s first official pop-up as Hellalumpia at Peticolas Brewing Company’s taproom in the Design District. Over the summer, Rañola decided to launch the pop-up, cooking the food that represents her heritage and helping to raise the Filipino banner.

We’ve seen them coming. The insider-crowd recognized the upswell of interest as restaurants like Bad Saint in Washington, D.C., with no reservations, 24 stools, and bowls of chicken curry, chicharrones, and crispy lechon, Maharlika in New York, and Lasa in Los Angeles all earned awards for their flux of Spam fries and sinigang, shrimp paste and sweet soy and vinegar. They melded these flavors into new harmonies in white-painted-brick or floral oil cloth-covered interiors. In Dallas, an emerging group of Filipino pop-ups—particularly Not Your Lola’s, Bilao, and Hellalumpia—helmed by trained cooks are banding together to fill a niche that they feel responsible for claiming and broadening. Together.

Denise Apigo, chef de partie at the French brasserie Bullion and founder of the recent Bilao, said it like it is:

“I’m so glad you took the lumpia torch,” she told Rañola at one of Apigo’s recent pop-ups at Four Corners Brewery. (Apigo’s friend from Houston had driven up with her own pastry-chef versions of ensaymada and French buttercream macarons.) “One of us has to. You’re gonna do us proud.”

At the Carrollton H-Mart, Rañola finds her particular brand of soy sauce, the one she grew up with. It goes into the lumpia, along with carrots, garlic, scallions. She serves the long spring-rolls with a sweet and sour chile sauce, “trying my best to mimic the sweet chile sauce that my aunts have made and taught me,” she says. Hers has notes of fresh pineapple, cooked down until it caramelizes, a touch that speaks of her culinary school background. The method for lumpia: an ounce of filling per thin, rice-paper wrapper, fold and seal, and “do it over and over and over again.” On-site, they will be tumbled into a fryer, from which they will emerge golden and flaky, the quintessential Filipino party snack.

At the Peticolas taproom last Saturday, there was mushroom pancit, a vegan variation of the rice-noodle staple usually laced with pork. “[My mom] would always make a batch of pancit as a celebratory dish,” Rañola says, to celebrate A’s on report cards or birthdays—the message was love. So the dish screams her mom, but it’s undeniably an updated take.

There’s arroz caldo, a comforting chicken and ginger rice porridge, laced with chunks of tender chicken thigh that have been marinated in adobo seasoning and carry subtle layers of flavor. “I wanted to bring to light the garnishes.” The dish comes together with fried garlic, hard-cooked egg, and scallion oil, a drizzle of green around the edge, “just to make it my own.”

Friends helping behind the makeshift tables dunk and skim in woks for the flaky, crispy lumpia. They are perfect with a light, crisp lager. There’s the ube rice crispy treats, brilliant purple and fluttered with toasted, sweetened coconut. Attendees stand around, talking about comfort food—the soothing soup sotanghon or sopas, a creamy soup that carries the very Filipino flavors of ginger, garlic, and chicken over a base of evaporated milk and elbow macaroni. Conversations wax lyrical and wistful: the longing to have someone who can make it for them is strong. They talk about this and that. The energy is palpable. But always, lumpia and pancit.

Rañola, who is a part-time barista, recently saw the revival and elevation of Filipino food that was sweeping the West Coast and the East Coast among second-generation Filipino-American chefs, and found herself hungry to join the movement. “I really [want] it to be our time in the limelight,” she says. As in, “Hey, this is my food. This is the food I grew up on. And I wanna be that person,” she says, who brings it to those who don’t know it yet. 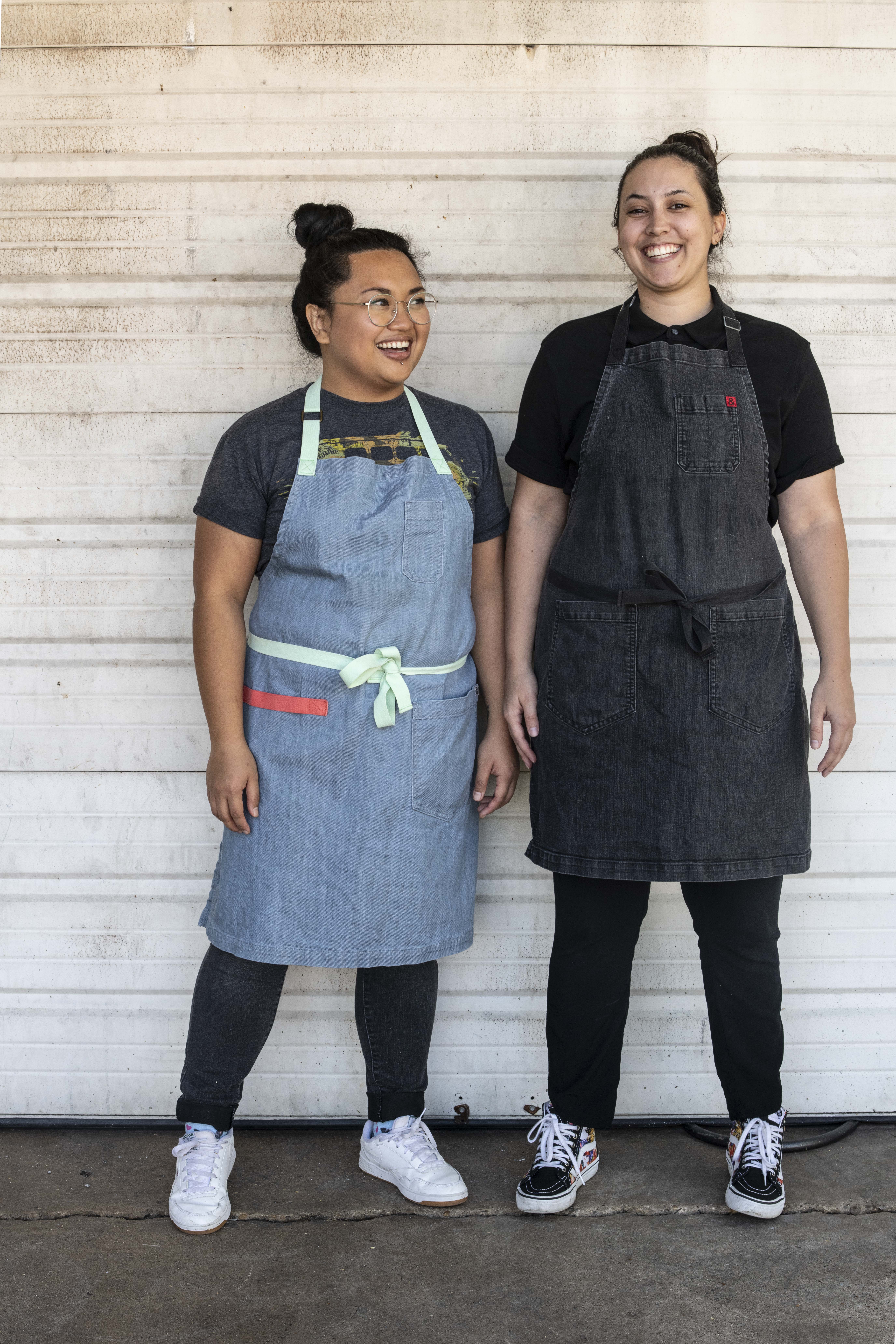 The recipes come from her memories of growing up in Florida in a vast extended Filipino family. She thrived at the matriarchs’ apron strings, helping in the kitchen, absorbing their ways of making things, a repertoire of knowledge that she didn’t yet know how to put into effect. “Growing up, I had different aunties showing me their method of rolling,” she says—gatherings on Sundays were full of laughter, storytelling, and warmth—“It wasn’t even clicking that I was learning the tricks.” But she was.

After graduating from culinary school in 2012, Rañola pursued an internship in San Diego, but “something was telling me to come back home,” she says. She worked at a restaurant in Orlando. In 2014, her mother, who was diabetic, died of renal failure.

“It did take a while for it to register [that] this was my purpose: this is why I want to do this,” she says of the urge to throw herself into cooking her childhood food. “This is how I connect with my mom. It’s like she’s in the kitchen with me.” A framed photograph of her mother watches over her from the stovetop.

Trammell, her business partner and girlfriend, who is working on a degree in psychology, takes care of the business aspects of booking gigs and so on. This allows Rañola to focus on the food. She is getting exposed to Filipino flavors. (Her recipe contribution, the rice crispy treats.) “So she’s, like, loving life,” says Rañola. Because, ultimately, Filipino food, the food of a thrilling and culinarily under-appreciated archipelago, is all about comfort.

Positioning herself between the pop-ups Not Your Lola’s more modern style and Bilao’s more rustic home-cooking, Hellalumpia is claiming its place. Because a rising tide raises all ships, and these takes, vegan or otherwise iconoclastic, but also reverent are feeding something deep.

“We know that we’re sharing this common purpose,” Rañola says. “As one of the few Filipino pop-ups in the city, I wanna make sure that we do it justice.”

As for the lumpia: “We’re bringing the party food, but I’m putting all my experience and schooling and all the teaching from my aunties and my mom. This is not just a tray of lumpia.” 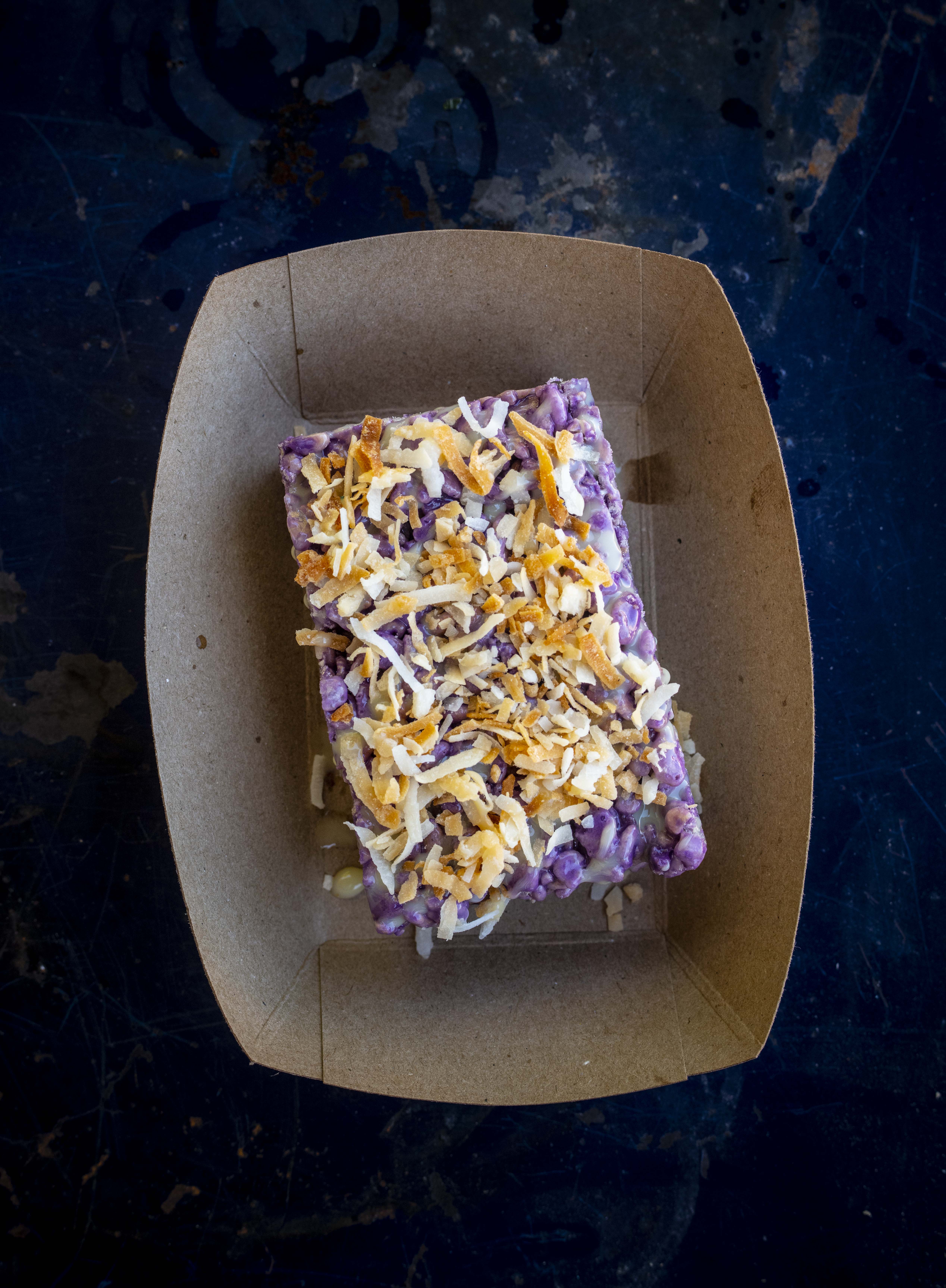