The operator of the Double Wide plans to open a third bar in a structure that’s served Deep Ellum for more than half a century.

The quiet style moderne building at 3400 Commerce Street acts as something of a dividing line between Deep Ellum and Exposition Park. It has received nods from the National Register of Historic Places and the Texas Historical Commission, described as “contributing to a district.”

The available listing calls the building a “gas station.” That was once true. It was a service station called Riegel’s for decades and it still looks like one, a William Eggleston photograph come to life. It has been the meeting place for one of those alcohol-fueled land boats with bicycle pedals. It has been a grab-and-go taqueria and poke bowl spot.

Its next transformation is planned for the spring of next year, as Thunderbird Station. A soft opening could happen as early as February. Standing against all odds in both commercial development and neighborhood upheaval, 3400 Commerce will contribute once again to its district, 62 years and counting.

Kim Finch owns the bar just across the street, the Double Wide. She also owns its thematic twin, the Single Wide, one of the only true bars left in Lower Greenville. Finch is opening the Thunderbird with Double Wide’s general manager, Joel Stephenson. Through a series of shrewd moves, she went from being a server and bartender to owning two, and now three, establishments. Although Stephenson has some experience opening barbecue chain restaurants, the Thunderbird will mark uncharted territory for Finch. This is her first bar that will also feature food. Sitting in a dark corner of the Single Wide on a Monday afternoon, she is clear about her vision for the Thunderbird, although many questions remain unanswered.

“I want it to be a bar first and then have some food,” Finch says. “I don’t want it to be a restaurant. I think there’s a lot of places that get too high-end and too crafty and that’s not what we want to do. We want to go back to the basics and do simple food that’s not 20 bucks.”

The Thunderbird will not share the same cartoonish drink menu as Finch’s other bars. No Tang or Yoo-Hoo mixers. The overriding theme here does appear to be nostalgia, and Finch does not shy from it. Her aesthetic is steeped in a certain leather-jacketed reminiscence, and she comes off as the smartest rocker in the room, which she probably is. She has yet to fail in business. Double Wide celebrated its 16th birthday earlier this year. Single Wide just turned eight.

Finch’s ease within the nightlife environment is a family tradition. She is originally from Del City, Oklahoma. Her parents and grandparents were country and western musicians.

“They would tour to bases, a lot of touring to military bases,” Finch says. “They would do some clubs here and there. My dad met my mom at the music store my grandpa owned. When they weren’t touring, they had a music store where they would sell instruments.

“Whether it was being in Oklahoma with my family—I was in that nightlife culture,” Finch says. “Moving here, I was instantly introduced into: all of my friends were in bands and in bars and … I guess I just went from growing up in a bar, you’re working in a bar, now I own a bar. I think that was pretty seamless. Nothing really changed.” 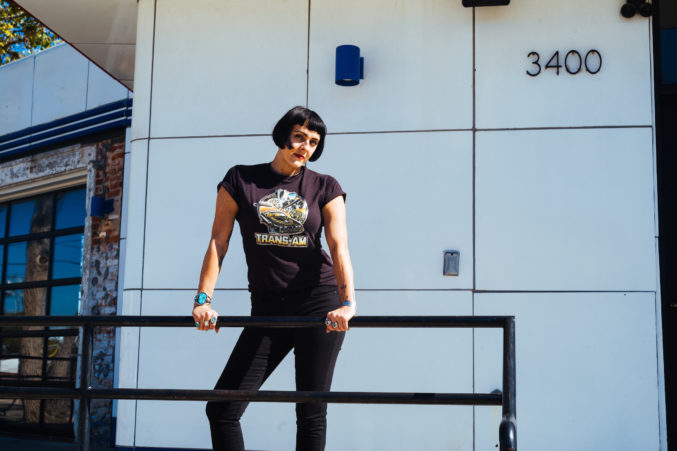 Finch’s longing for another era is answered by her new building’s curving architecture and its former life as an auto garage.

“We went through so many names and I couldn’t get anything to stick,” says Finch of the Thunderbird moniker. “I kept coming back to kinds of cars. I love old cars. Me and my dad always had old cars growing up and my grandfather built cars. After trying to think of kitschy, funny names, I felt like they were too forced. And I was like, ‘Man, it’s a service station.’ Let’s think about cars.”

She jotted down car names. The building shares a kinship with the gas stations that were found along Route 66. Thunderbird stuck out to her, she says, matching the building’s architectural relation to the southwest.

Thus far, Finch envisions the Thunderbird as short on gimmickry. It will be a bar, first and foremost. There won’t be space for the weekly DJ nights and concerts you’ll find at her other ventures. It will likely be split between two rooms with a bar that runs the length of the space. “We definitely want to do frosty mug, ice-cold beers,” Finch says.” Not a lot of places do that anymore. That to me feels nostalgic. You get off work at your 9 to 5 and you have a frosty cold mug.”

Thunderbird’s slight capacity will be rounded out with a wraparound patio. While it may not have the party-forward feeling of her other projects, she envisions Thunderbird Station as casual. “I want it to be comfortable, like you walk into some old man’s garage.” After all, she says, “it’s a service station. I think a lot of people when I explain it, they think 50s diner-y, I don’t want it to be that polished.”

The Double Wide and now the Thunderbird are somewhat isolated from the walkable strips of Deep Ellum and the row of businesses that dot the neighboring Expo Park, which may explain why the former has been shielded from the persistent booms and busts of those neighborhoods. Expo has turned over at least twice in the years that Finch has operated Double Wide. Some stability—anchored by the mezcal bar Las Almas Rotas, Pizza Lounge, Eight Bells Alehouse, Craft and Growler, and the privatization of Fair Park—has settled the block. Deep Ellum, meanwhile, is bursting at the seams. The Deep Ellum Foundation expects a 75 percent increase in residential units between 2018 and 2020. Thunderbird could be an ideal place to slow down.

“I’m super excited for it,” Finch says. “I wish it would start happening. The space has to come together. I don’t want to force something that’s not going to work. I work better spontaneously.”

Thunderbird Station is scheduled to open in Spring of 2020