What, dare I ask, is a snookie? Is it a combination snack and cookie? A clever shortcut to saying snickerdoodle cookie? Perhaps a sugary homage to the Jersey Shore star? It’s unclear what exactly distinguishes a snookie from its ubiquitous cousin—but, apparently, it’s a remarkable treat.

Over the last couple weeks, y’all have been voting for your favorite State Fair of Texas food in our bracket. Sixteen unique bites went to battle, dwindling down to two champs over the course of four rounds. There were some shocks along the way—the turkey leg, a true icon, was voted out in the first round—but after many difficult decisions, the final competitors faced off in the ring.

The Fletcher’s Corny Dog, of course, was the frontrunner. The deep fried delight is a staple of the fair food pyramid. It is as iconic as Big Tex himself. It is, and I don’t think I’m being dramatic when I say this, a metaphor for the fair itself: A greasy yet wholesome tradition best enjoyed rarely. I’ve heard more than a few people say it’s the sole reason they visit Fair Park this time of year.

And yet, today, on October 15, 2019, the Fletcher’s Corny Dog has been defeated. Defeated by a snookie. 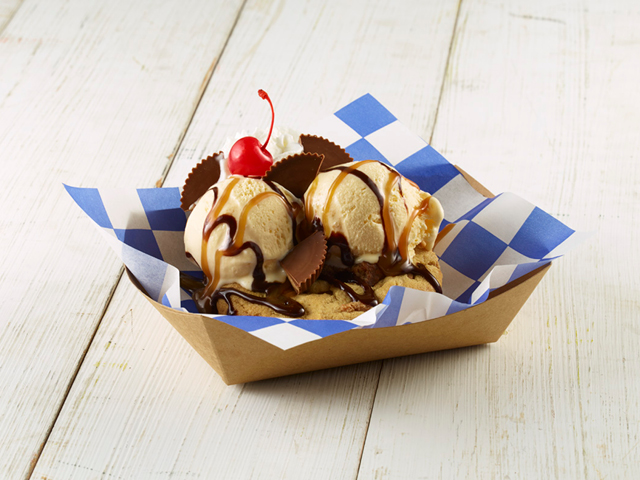 The votes have been counted and the results are in. The Peanut Butter Cup Snookie by Michelle Edwards wins the readers’ choice by 25 votes!

The State Fair newcomer was one of this year’s Big Tex Choice Award finalists in the “Best Taste – Sweet” category. In that competition, it ultimately took an L to this sexy chicken wing in a donut wearing sunglasses. This isn’t a beauty contest though, and the Big Red Chicken Bread didn’t even make it through the first round in our bracket. Take that, cute chicken wing!

Could the Snookie be the State Fair’s next funnel cake? Does that question even mean anything? No, but you should try this indulgent treat while you can. Here’s where to find all the new foods this year, should you want to get that shady chicken wing or whatever. There are only six days left of the State Fair of Texas, so get scootin’.