Meatballs are cool. Their existence dates back to the 4th or 5th century, where they were documented in Apicius, a collection of Roman recipes. They can be made using ground beef, veal, lamb, breadcrumbs, pork, cheese, turkey, parsley, chicken, and thiamine mononitrate. Some famous meatballs include Meatwad from Aqua Teen Hunger Force; the lone meatball that The Tramp nudges over to Lady during their romantic back-alley dinner; and that one meatball, which rolled off a mound of spaghetti when somebody sneezed.

Meatballs can be served many ways, but a favorite is drenched in marinara sauce, covered in melted cheese, and squished between toasted bread. The meatball sub, like the Pomeranian and Jeff Goldblum, is a gift to humanity. Praise be.

In true taste test fashion, we ordered a handful of sandwiches to the D Magazine offices, ate them, and wrote down our thoughts.

Not bad, but meatballs are too big and need more flavor and sauce.

Having already eaten a healthy spinach salad topped with grilled chicken, I said I couldn’t participate in this taste test. It was at that point that my ankles and wrists were bound, and I was tied to a hard wooden chair, where I was force fed six meatball sandwiches. It was like being waterboarded, only with meatballs. I found the meatballs on this first sandwich a bit dry.

Yep. This one is classic. A nice balance of meatball, sauce, and cheese melted to the roof of the sandwich, the way it should be.

The bread is too firm and there’s not enough sauce. The meatball is a little spicy, and it tastes pretty good. This seems like a meatball sub from a restaurant where you should order a cold-cut sub instead.

In round one here, the meatball is as big as a scoop of ice cream. I wouldn’t be thrilled if it plopped onto the sidewalk, because this is a decent sammy.

Love the combo of peppers, cheese, sauce, and bread. So gooey.

As my meatboarding continued, my captors began playing Whitesnake’s “Here I Go Again” at an ear-bleeding level and on a loop. I struggled to catch my breath and remain conscious. The cheese on this sandwich had congealed, which did not help my situation.

I like the flavors here, but that pale bread gets pretty darn mushy.

Bellissima! I know this meatball sub well, it’s from Jimmy’s Food Store and it’s perfect. The griddled bell pepps, the fatty mozzarella, the deliciously soggy bread. I love it. I wish I could stop this taste test here, but other subs are calling.

Too much bread. It got a tad soggy but has a good flavor.

After the 23rd or the 123rd playing of “Here I Go Again”—I’d lost count of not only how many times I’d heard the song but also of which day of the week it was—this meatball sandwich was forced down my throat. I couldn’t see what the meatballs looked like. Did I mention I was blindfolded? But I’m pretty sure this sandwich was filled with pork-only meatballs. They were firm yet moist.

There’s a funny, bouncy texture to these meatballs.

The bread is kinda nice, but the meatballs don’t taste very good. I don’t like this. It’s gross, tbh.

Bread is too cardboard-y and the herbs ain’t plentiful enough. How many more of these are left?

Is this fake cheese?

A car battery attached to my nipples with alligator clips was at first a welcome distraction from the Whitesnake and the meatballs, but then that, too, became something I’d rather not endure after having already eaten a healthy spinach salad topped with grilled chicken. And then came this sandwich. I don’t think the meatball was cooked all the way through. It was more like meat paste.

Whoa, that’s a hot mess. As I pick it up, it loses all structural integrity, oozing out into a sauce-drenched pile of soggy cheese and bread and … black olives? Everything is soggy. The meatballs are squishy. Someone got the idea that this was a bad veggie pizza, maybe? And the square potatoes are confusing.

Surprisingly OK with the black olives on this.

Trying to be fancy but it doesn’t work.

You’ve heard of Stockholm syndrome, right? That’s where a hostage develops a counterintuitive bond with his tormentors. I decided that the people electrocuting my nipples and shoving meatballs into my mouth really did pick the best Whitesnake song off 1982’s Saints & Sinners album. Did you know that the original lyric was “And here I go again on my own/ Goin’ down the only road I’ve ever known/ Like a HOBO I was born to walk alone,” but then, when the band rerecorded the song for its 1987 self-titled album, David Coverdale changed “hobo” to “drifter,” because he thought people might think “hobo” was actually “homo.” My captors explained all this to me, and I was so appreciative. Then they shoved this sandwich into my mouth. What kind of bread was that? And was that even real meat? It didn’t matter. I loved it.

Salad on the side—so we’re going healthy. The meatballs are flavorless and mushy. I don’t think they’re any kind of meat. Is this seitan? The cheese and bread are bland and boring. The “sauce” seems to be just a can of stewed tomatoes. I am contemplating being disappointed in the world.

I thought maybe I’d pick back up with E, but then I learned there’s also an F, and I don’t have the emotional, mental, or physical capacity. I would, however, take more of the Jimmy’s sammie, but it’s gone.

What am I eating?

This is good. The bread stays crispy and the sauce is comforting. Solid second place. (My favorite is B.)

I really thought I’d die from cirrhosis or from having a tree fall on me. But, no, it turns out that meatballs and soggy marinara-soaked hoagie rolls did it. This sandwich is the one that finally did me in. On the upside, though, it was my favorite meatball. Well seasoned. Good texture. No funeral.

The meatballs here are tasty and the French bread and fries were probably crispy once. I’m much happier with this one. Probably my favorite meatballs of the bunch.

I don’t really know what a good meatball sub tastes like anymore.

The winner is:
Jimmy’s Food Store is the favorite. This sandwich is a stunner. Here, look: 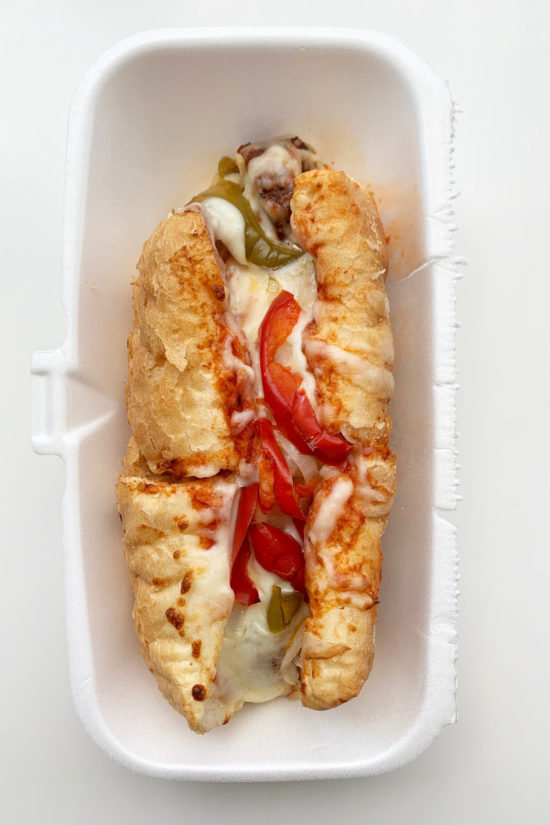 Do you like meatballs? How about meatball subs? What’s your favorite meatball sub in Dallas? If you sneezed on a meatball and it rolled onto the floor, would you pick it up and eat it?