I’m a breakfast person. Breakfast tacos, doughnuts, bagels, cereal—you name it, I’ll eat it. But one thing I don’t typically consume at this most glorious of meals is muffins. Not that I have anything against the fluffy baked good. They’re just not as prevalent in my experience. So when I heard that a little place on Greenville Avenue (more or less on my way to work from East Dallas) was serving up both savory and sweet muffins, I was intrigued. And I’ve never been known to pass up a new breakfast opportunity.

I met my dad, who also loves breakfast, at Three Egg Muffins on a recent morning at 8 a.m.—okay, I was running late because my 5-month-old puppy refused to go to the bathroom. Sorry, dad. Anyway, I pulled up to the cute black-and-white-tiled spot across from the Granada and Snuffer’s and next to Betty’s Best Chinese. Three Egg’s owner, a former sushi chef, switched to breakfast a few months ago because his family loved the muffin creations he made for them at home. 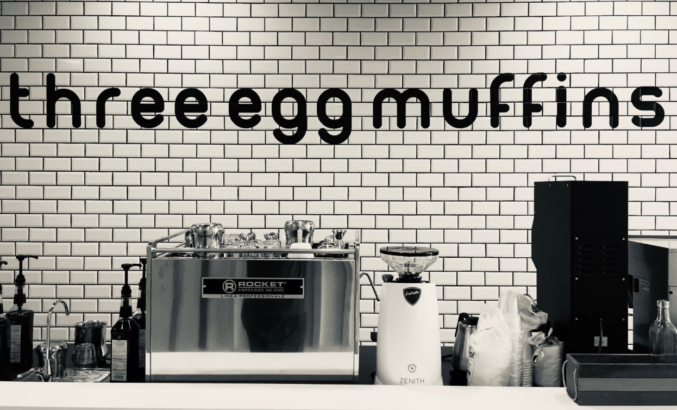 Walking in, I was greeted by yellow accents and a sleek, narrow bar. On my left were wooden cabinets and nooks filled with old records, plants, and vintage coffee paraphernalia. Two women had posted up at the bar near a TV screen that flashed only images of New York City. My dad and I claimed the cushy leather seats in the corner by the window.

On the bar was a glass case advertising an example of each type of muffin, both savory and sweet. The sweet category included apple cinnamon, banana nut, peach cream cheese, strawberry cream cheese, and cookies and cream. The savory row included Little Fritta (bacon, ham, onions, spinach, scallions), jalapeño beef sausage, maple sausage, bacon and cheddar, ham and mozzarella, and veggie, which had mushroom, tomato, spinach and onions. All adorable, all relatively cheap at $2.49, with The Original at $1.99.

The sweet muffins packed either fruit or cream cheese inside, and the savory ones had a whole baked egg on the interior. The toppings were appealingly arranged—that is, until we tore into a few to sate our stomachs. We ordered a banana nut, an original, a bacon and cheddar, a ham and mozzarella, a maple sausage, and a veggie. The banana nut was chock full of slivered almonds, sunflower seeds, raisins, and a juicy banana slice at the center. The others combined the slightly sweet muffin bread with savory cheese, egg, and meat on top, resulting in an unexpected but delightful salty-sweetness. Like trail mix, but warm, and way better. The muffin portion did have a tendency to crumble, but the flavors held up—especially in the maple sausage, a best-seller.

We washed our nuggets of egg-muffin goodness down with java from Richardson’s Eiland Coffee Roasters, which was also reasonably priced at $2.50, with a latte costing $3. These days, spending 10 or 12 bucks on a breakfast taco and a coffee drink is normal. Getting a souped-up muffin and a coffee for $5 flat is a steal.

My dad and I agreed: at these prices and quality, we might have to make this our new breakfast spot.