Two hungry carnivores walk into a vegan cafe…stop me if you’ve heard this one before. It’s likely you recognize this premise (or have lived it) because we’re at the onset of a Golden Age for plant-based culinary ingenuity. Translation: it’s getting more difficult to tell the difference between animal proteins and their far more sustainable counterparts.

Viridescent Kitchen opened at the end of July in far north Plano (across Highway 121 from IKEA) and brings vegans and veg-curious diners a unique concept. Owned by Laura Thornthwaite and Gabrielle Reyes, the bright, cheery space features a selection of take-home market items (vegan queso, small-batch popcorn, frozen “shrimp”), grab-and-go meals, a display case packed with sweets from Artemis & Apollo, and a dine-in menu that changes daily along with the chef. 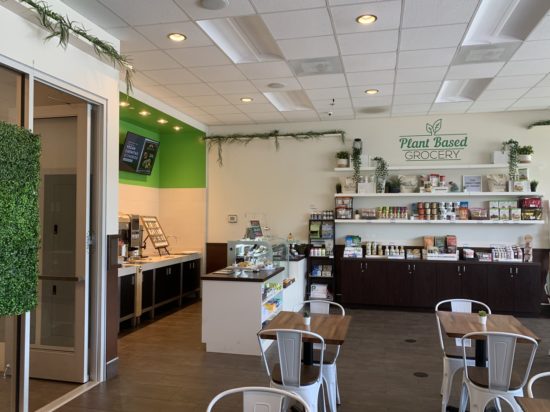 This revolving-door concept gives patrons the chance to theoretically come multiple times a week and not eat the same type of cuisine twice. The full schedule can be found online, and the all-vegan options include Noble Burgers & Bowls, Cajun soul-food brunch from Ish Vegan Cafe, breakfast tacos from The Little Vegan That Could, and ice cream from AJAE’s Scoops.

On the day my friend and I visited, the Mexican-themed menu came courtesy of Fort Worth-based Sierra Valley Foods. We ordered a plate of tacos, a platter of nachos, and the daily special, which was a large torta with tortilla chips. For the tacos, we chose “al pastor” made from chickpeas, jackfruit “carnitas” for the nachos, and lentil-based “carne asada” on the sandwich. 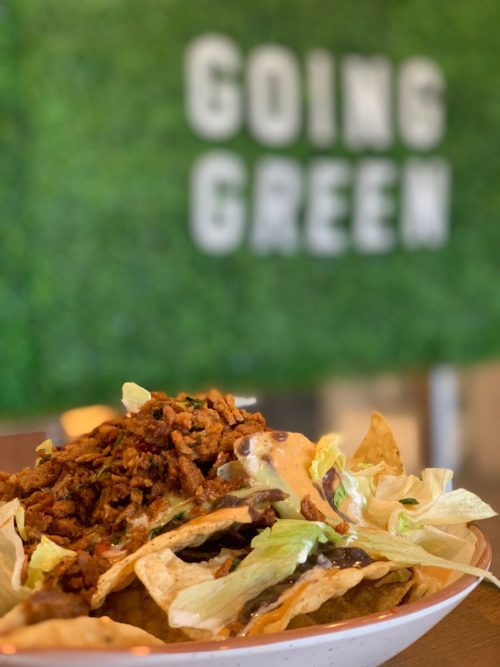 The items were hearty and satisfied our hunger without sacrificing flavor—or pigs and cows. The nachos were our favorite dish. Mounds of crispy tortilla chips were slathered in black beans, vegan queso, shredded lettuce, and a generous portion of carnitas. We found ourselves adding the salsa verde from the taco plate to every bite. Packed with a white-hot heat and layers of spice, this is one of the best burns-so-good salsas in the city.

My only notes for improvement would be toasting the bread for the torta and upgrading the greenery on the nachos and torta. Both featured iceberg lettuce. And at $15 to $16 an entrée, the option to have a handful of spinach or even romaine would seem appropriate.

But I’m not one to allow room-temp bread and entry-level lettuce to overshadow the key takeaway from our visit, which proved that two men who could totally have bacon at every meal can easily (and happily) incorporate more vegan food into our diets. Who knows, if the innovation in plant-based gastronomy continues, it’s not entirely out of the question to become a total vegan convert one day.

And that’s no joke.