There’s something magical happening at Fauna, the 16-person tasting-menu-only room and restaurant-within-a-restaurant at Flora Street Cafe in the Arts District. Not the dry-ice mist that billows around frozen Paloma bites presented on halved grapefruits, but the non-alcoholic pairings you can elect to have accompany your $150 ten-course tasting menu, instead of, or alongside, one of two wine pairings (for an extra $50, $125, or $250, respectively). Think alchemical combinations of sodas, extracts, tinctures, juices, and teas, served in pretty glassware.

“It was something that Stephan [Pyles] wanted to see,” says Aaron Benson, who is behind both wine and non-wine. “We saw that it was a growing thing,” cognizant of a trend catering towards the “sober curious,” the term coined for those seeking new alternatives to alcoholic libations, but in a spirit of discovery, a generation whose interest is piqued by the intriguing and adventurous, the artful and balanced. (Don’t believe the trend? Read here, here, and here.)

Tweezering borage blossoms fell to Benson, whose work I’ve admired at numerous places and who has crafted cocktails and wine lists. He steeped himself in reading. “We want to be talked about on the same level,” he says, of places like Atera in New York City. 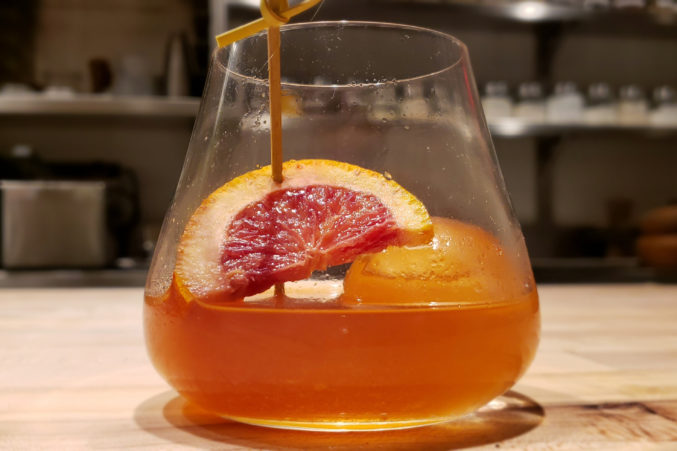 “I wanted to reverse-engineer wine and start from that. With wine, you have a lot of acidity or a lot of tannin, and those chemical elements will harmonize. When you go to non-alcoholic, the temptation is to go all sweet.” Sweetness plays a role, but umami much more so. His goal: having texture and weight (how “fleshy” could it be?), something savory to balance the insinuation of sweetness. “So the bridge, for me, was about umami,” he says. “And I thought about teas a lot” (sourced from the Cultured Cup.)

He’s reached for things like miso or sweet potato or verjus blanc. He’s playing with “neat ingredients back there, like powdered malic acid and citric acid that I can play with to put a little acid touch in,” he says, referring to his collaboration with Peter Barlow, who leads the dining-as-art edible side. “I’m gaining access to his mind and the ingredients. I haven’t always had exactly what I wanted on hand for garnishes,” Benson says. “It’s really fun for me,” he says. The intelligence is striking.

This leads to pairings that might begin with a little something—Seedlip, verjus, Topo Chico, celery bitters, with sprigs of thyme or frozen wild Muscat grapes bobbing in the upward swirls of pearly bubbles. “I wanted it to be a little splashy,” Benson says. Something that might mimic Champagne. “That acidity and that bubbliness. Topo that is a tiny bit salty and super-carbonated. A couple drops of muscat grape reduction. The celery bitters add that savoriness. Seedlip, herbal or citrus.” Yes, the muscat brought it closer to Champagne, and the textures and dryness were all Champagne. It was for several courses my favorite.

The sweet potato mocktail—a sweet potato, black currant, verjus rouge, moody thing—is one of the ones that most captures the thought process of reverse-engineering a glass of wine. “Black currant is kind of like cabernets, like a Bordeaux. The sweet potato came from the idea of having that umami element: embering that sweet potato in the fire, then boiling it, straining it. Then adding some liquid amino to enhance the savory element. [And] black currant has acidity and that faint impression of tannins, and other savory notes you might find in wine.” Taking you down that path, like the Barolo and Nebbiolo does with the Akaushi medallions.

“The one with miso,” he says—and here he means a coupe of something opaque, golden: miso, pineapple, and ume vinegar, with added color from turmeric. They work magic together. “It started with miso. And then I happened to be in that section [of a store] where they have spirits, and I saw the [pineapple] shrub. And I thought, pineapple and miso sounded like a good combination. Another ingredient would be clam juice.” Paired with a crab course, it came garnished with a salted shiso leaf that mimicked the brininess of the sea.

Later would come a cocktail in an ebony glass; one that stumped and mesmerized us with its spices: an Aztec chocolate pu-erh (so all the spice was in the tea), with date sweetness and blood orange (plus with a wheel of blood orange as garnish and a square ice cube, it was a great drink); a paloma with fresh-squeezed grapefruit, lime, chile, salt rim; and finally a cup of frothed milk with rooibos and vanilla and chamomile and orange blossom. It was a very soothing, delicate drink.

The non-alcoholic pairings—Benson estimates an average of two per service—have people murmuring, surprised by their savory nature and complexity.

At a single table, Benson says, “I might have people have two different wine pairings and one alcoholic pairings. That just means that I’m scrambling around like a crazy person between courses. It’s still very living,” he continues. “I haven’t really documented it. That kind of madness between courses is kind of the fun. It adds that element of challenge. I’m excited I get to do it. I know there’s inspiration.”

Meanwhile, they’re interesting enough that on more than one night, it was hard to say who, between my wine-pairing dining partner and I, had the more interesting choice. We have no more creative take than Fauna’s. That I can say definitively.