When Jeanine Stevens moved to Dallas in 1980, she was focused on her advertising career. She wrote commercials for Pilgrim’s fried chicken and helped create ads for TracyLocke. Then, when she went freelance full-time, the work stalled.

While commiserating with a fellow freelancer in 2011, he asked her what she liked to do. “I like to eat” was her immediate answer. Stevens had grown up in Chicago with parents who introduced her to all the good neighborhood bakeries and restaurants, which gave her a knack for finding off-the-beaten-path gems. Her friend had relatives coming to visit Dallas and asked if she could compile a list of her favorite eateries for them. They went on a tour of her recommendations and were enamored.

Word of her culinary know-how spread, leading her to put together tours for other friends and hosting one for her sorority’s alumni. Then that same freelancer friend had an idea: “I dare you to do this for the rest of the world.” It was a challenge she couldn’t pass up.

Chocolate seemed like a fitting inaugural tour theme, and Katherine Clapner of Dude, Sweet Chocolate connected Stevens to other dessert gurus in town. Since, Stevens figured, not many people walk in Dallas, she wanted to charter a bus for the occasion. Instead, she wound up with a van—sans air-conditioning in the 107-degree August heat. In spite of that, her first official tour was a success, with Chocolate Secrets being one of the first stops. 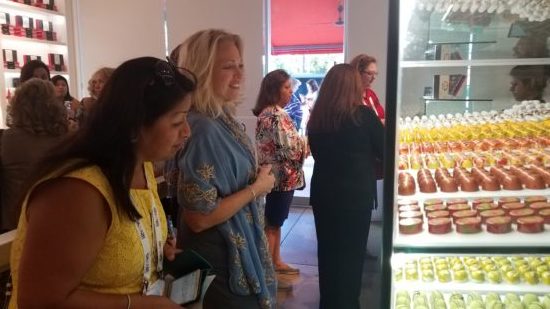 The Dallas Chocolate Festival the following week proved to be ideal advertising for her fledgling business, but months passed without her being able to put together an itinerary. And then, on Valentine’s Day 2012, things changed. She sold out her first real bus tour.

Stevens began regularly hosting half-day weekend Dallas By Chocolate bus tours, nearly all of which sold out. But she quickly learned that not everyone likes chocolate. So tacos and barbecue were up next.

Then, that Christmas, one of her tour guests suggested she start hosting Christmas light tours along with chocolate and wine. It’s now her biggest tour by far—nightly buses cart around 3,000 people to view Dallas’ brightest lights in the month of December alone.

Each tour sticks to rotating local mom-and-pop places and excludes chains (save for a select local few). “I feel like that would ruin the magic of it,” she says. The shops, like Kate Weiser Chocolate, El Come Taco, and Val’s Cheesecakes, work with her to provide a sampling of their best goods. She puts on tours for corporate groups like Mary Kay and Texas Instruments, bachelorette parties, and wedding proposals. She’s even hosted tours for certain local celebrities.

Downtown Dallas and Grapevine tours are next on Stevens’ list. She wants people to go beyond the typical tourist attractions whether they live here or are visiting and hopes her tours encourage branching out. For someone whose clientele ranges from Girl Scouts to millennials and CEOs to 80-year-olds, getting people out of their comfort zones seems to be her calling.

Scenes From the Dallas Chocolate and Art Show