The Leaky Cauldron opened on August 8. The 31-day Harry Potter-themed pop-up bar, located inside what is generally known as The Whippersnapper, is bedecked with memorabilia and Potter-themed decor. There are Hogwarts House banners. There are floating (OK, dangling) battery-operated candles. There’s a mostly-nude painting of Hermione Granger. On opening night, the staff was dressed as Harry and Dobby the House Elf. One woman was wearing a metallic gold bodysuit—she was the Snitch.

Now, I’m a Harry Potter fan in that I’ve read all of the books and have seen all of the movies and have played Harry Potter and the Half-Blood Prince on a Nintendo Wii. (Fine. I beat the entire game 🤓) But there are millions of more qualified Harry Potter fans out there in the world. Heck, even in the D Magazine office. One such person is Carly Mann, the magazine’s brand marketing manager.

Carly’s House is Gryffindor. Her Patronus is a fox terrier. Her wand is elm wood with a phoenix feather core, 9 ¾, and solid flexibility (when she’s dressed up as Voldemort). And her Ilvermorny House is Wampus. I don’t even know what that means. But this is what she told me. And I believe her.

Last Wednesday, Carly, who was dressed in a bald cap and cape (She’s Volde! Duh!), checked out The Leaky Cauldron. Here’s what she thought.

So what makes you D Magazine’s No. 1 Harry Potter fan?

My mom read the first three books to me because I was so young, and I probably couldn’t read long books like that. But I started reading them with the fourth book. I went to every single premiere of every single movie. My mom actually was friends with someone who worked for Warner Brothers, so I got to go backstage.

Harry Potter was just such a big part of my childhood and as cheesy as it sounds, when I got older, and there was something tough going on in my life, I would play the Harry Potter movies and they always took me back to that time when I was five or seven years old, and watching Harry Potter for the first time. And when the soundtrack came on, I was like, ‘You know what, no matter what’s going on in life, everything’s OK.’

I watched it a lot when I was first going abroad, and I was sad and it was dark and all my friends were back home. Harry Potter really brought me back home. It’s always been kind of like a safety blanket for me. 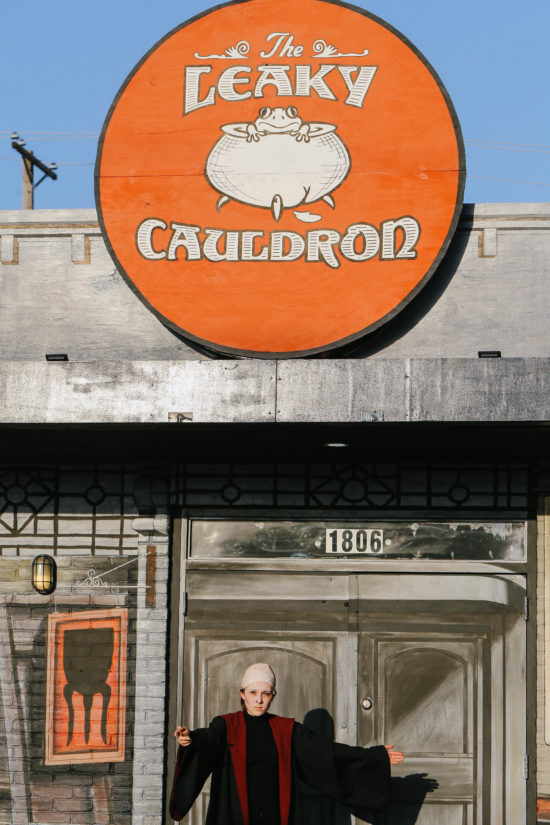 Because he’s the funniest.

Would you go out with Ron Weasley?

He can make me laugh, so I think I would.

What would you do on your date?

We’d start with some Butter Beers at Three Broomsticks, then we’d head to the Shrieking Shack and have a shrieking good time. (That’s probably not appropriate. Ha-ha.)

You’re dressed as Voldemort. Why? 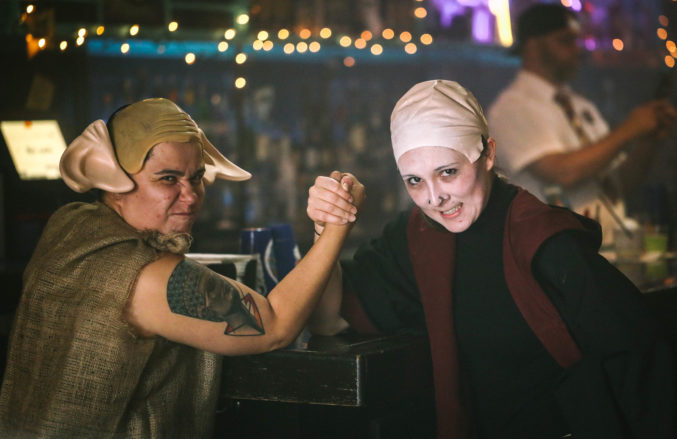 We are here at the Harry Potter-themed pop-up bar. What are your initial thoughts? What do you think of it so far?

I really like it. I really do. I love the floating candles and I love all of the different houses on the wall. It feels great and they’re playing the Harry Potter soundtrack, which really helps. And there’s a lot of smoke. It’s kind of grungy.

What are you drinking?

The Dumbledrop, which is Deep Eddy lemon vodka, Sprite, whipped cream, and lemon zest. It’s a little sweet but I like how they put whipped cream on top to mirror Dumbledore’s beard. Feels nice. Feels right.

How do you feel about the nude painting of Hermione on the wall?

I don’t like it, I honestly don’t. She’s not a sexy character; there’s a reason why she didn’t pick Harry to be with her. She wasn’t attracted to Harry, because she doesn’t need him. She is a strong female lead, and she doesn’t need to have a love interest with the hero, with ‘The Chosen One.’

What about the painting of Dobby drinking a 40-ounce beer?

You know, it’s OK, he’s drinking, Dobby’s allowed to have a good time, he’s a free elf. He wears shoes, he does his thing. He is a single, independent elf, who don’t need no master.

Would you return to The Leaky Cauldron?