Flora Street Cafe has been in the spotlight recently. First there was the announcement that Pyles’ Arts District gem would be reconfigured, with a new restaurant-within-a-restaurant (named Fauna) presided over by executive chef Diego Fernandez, who was most recently plying his knives Chicago’s high-end Alinea. Byres, long acquainted with Pyles, was hired as managing director as Smoke closed, a figure tasked with ushering in a new approachability for the rest of the restaurant. (They talked about this here.) Then followed the announcement that Pyles was joining with Ventana by Buckner senior living, branching out to a whole new sector. And then there was the delight-and-debacle of brunch. 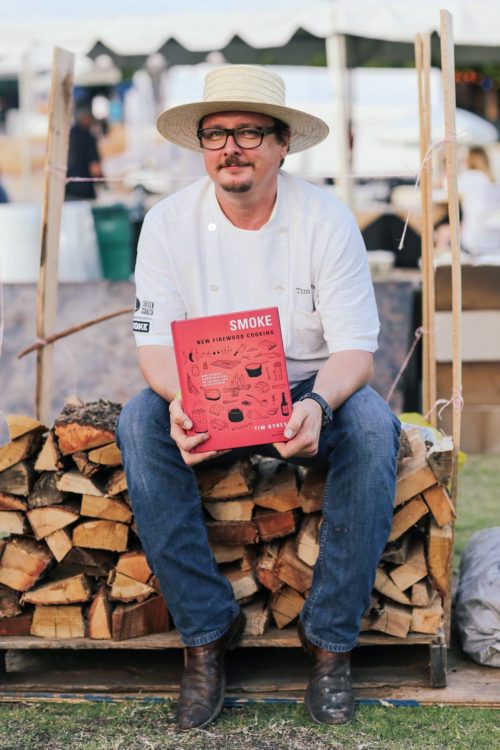 Now, it appears that Byres, whose fluffy ricotta pancakes (from Smoke) will, I fervently hope, stay on the brunch menu, is departing in order to pursue his consulting business, which is deeply tied to his work on live-fire cooking. Byres’ son Liam Byres will continue as sous chef at Fauna. (Another element that’s staying.)

So, Byres will expand his consulting business. I reviewed his James Beard award-winning cookbook, Smoke: New Firewood Cooking, in 2013. In 2015, I wrote a profile about him for this magazine, titled “The Many Lives of Tim Byres.” In this profile, I explored his Protean, shape-shifting side, his tendency and capacity to reinvent himself. Since then, he has closed Smoke, opened and closed The Theodore and Tight Quarters.

A particularly germane passage from the profile:
“[Longtime friend Ian] Beach remembers when Byres, having found vintage skis at a yard sale, spontaneously created a pop-up 1940s ski lodge at Standard, just because. ‘He would cook like a madman, so that’s like 16 hours a day, and then he would tear everything down, and half the restaurant was this thing, like an art installation,’ Beach says. ‘I mean, hot damn, just stop! Stop and slow down.’ Byres is the friend who might rope you into a motorcycle adventure across the steppes of Russia to document foodways, or down the length of South America to Patagonia. ‘He’s the kind of guy who will take off in his Jeep and be gone for a week and come back and know how to do something,’ [former business partner Chris] Jeffers says.”

It might make a good read now. The ending seems particularly prescient. After all, it’s all about stories and questions that are patently in Byres’ wheelhouse: How to keep moving. To keep inventing oneself. To move through crossroads.

Smoke to Open in Plano at the End of December