Some were creamier than others. Some had dill. One had peas. Here's what happened.
By Catherine Downes | May 17, 2019|4:00 pm
Advertisement

There’s a scene in Big Top Pee-wee where Winnie and Pee-wee Herman are having a picnic. Winnie, in a lilac button-down dress, is gleefully eating an egg salad sandwich when Pee-wee asks if he can run his hand through her hair. She agrees. “That feels good,” she croons as Paul Reubens pushes his lanky extremities against her golden locks.

A few seconds later, his hand gets stuck. It’s super awkward and looks super painful for Winnie, but once they’re untangled, Pee-wee lies down with his head in her lap and gazes at the clouds in the sky. How romantic.

Winnie, too, gazes at the sky while continuing to eat her sandwich, unaware that giant globs of egg salad are falling out from between the bread and plopping onto Pee-wee’s face. Rather than making a scene, Pee-wee takes the bottom of her dress and wipes his face clean.

My colleague Natalie Gempel, who you might known from FrontRow, has never eaten egg salad before. She says this movie is probably partially responsible. “I never felt like eating it after I saw this scene,” she told me earlier today. The fact that there’s a person who grew up in a Texas suburb who has never tried egg salad kind of blows my mind. But maybe it shouldn’t. I mean, I’ve never been to an Olive Garden. And Kevin Jonas waited until marriage to have sex. We all have our things.

This week’s taste test was one that I was especially excited about. I love egg salad. The creamy blend of boiled eggs, mayonnaise, mustard, salt, pepper, and dill (if you’re lucky) reminds me of childhood summers spent at art camp in Michigan. I also just really love mayonnaise. And eggs.

My feelings, however, were not shared by many of the talented and wonderful people I work with. I literally got booed out of the art department by simply murmuring the words “egg” and “salad” back-to-back. (Honestly, that was super rude, guys. But I forgive you.)

After dropping to my knees and begging, I was able to wrangle a handful of participants. Not Natalie Gempel, though. Or Shawn Shinneman, who you might know from FrontBurner. Nooooooo, ma’am (sir). They were too good to eat this (arguably) delicious dish in the name of research. But that’s OK. I forgive them, too.

I stopped by five stores on Wednesday and picked up their grab-and-go egg salads. Some were creamier than others. Some had dill. One had peas. Here’s what happened. 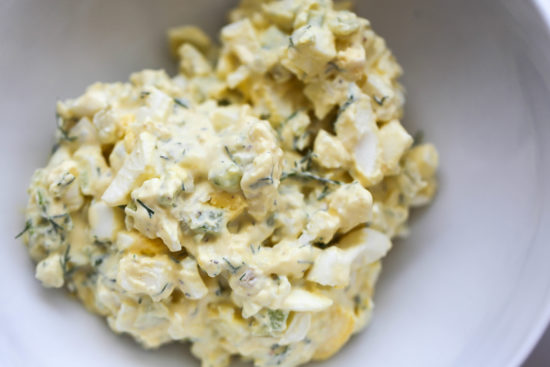 It’s very light. It’s almost bland, but in a good way. The dill isn’t overwhelming either which is nice. This would be a solid side at a picnic.

Man, dill is really underrated. If you think that, I believe you will enjoy this egg salad. Other than that, I don’t know. It’s sort of standard egg salad. I don’t taste any other seasoning here. Just egg, mayo, and dill.

Dilly! Dilly! This one is smooth and sweet with a nice little crunch. Onions?

The added crunch is a nice surprise. A little too much dill for me. 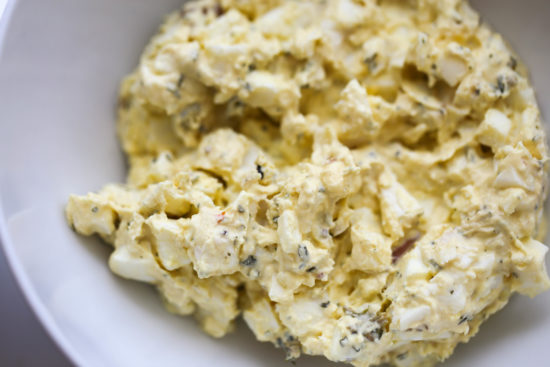 Mustard! Man that’s strong. That and the pepper really come through. I like this. This is a Bold Egg Salad. Interesting change between A and B; they’re almost opposites.

Tangy and chunky. This one is my favorite. Classic and simple, as egg salad should be.

Mustard egg salad, heavy on the mustard. Nothing wrong with that. Still good.

Classic egg salad plus a bit of pepper. 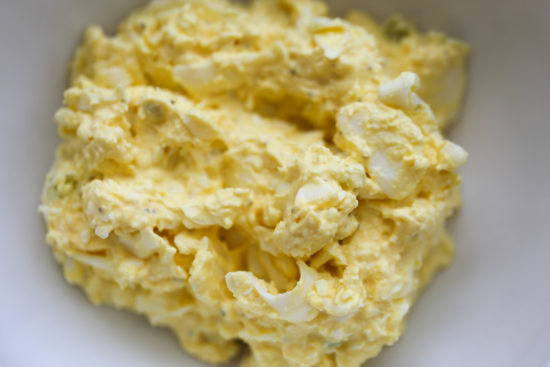 This one’s really sweet. I don’t like eggs to be sweet. This weirds me out. Also, there’s a sharp spice at the end?

This one is sweeter than the others, but I’m only just now realizing how much all egg salads taste alike.

Tastes like someone that forgot they had to bring egg salad to a potluck and rushed to do so by putting the boiled eggs in a blender and skipping any type of seasoning. 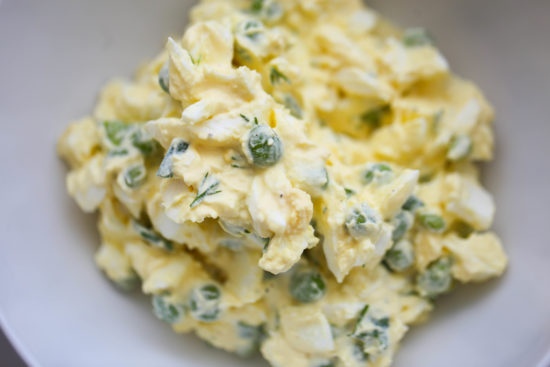 Weird flex with the peas, but I don’t mind it!

Looks like green onions in this one. That, I dig. But, peas? Why are there peas in this egg salad? Is there a group of egg salad die-hards that would freak out like the guac nerds did with the New York Times suggested putting peas in that? I would like to meet one of those people, if so. Egg salad is such a weird thing. I can’t imagine anyone being that passionate about it.

Does this have peas in it? It does. Huh. That’s all.

The peas ruin this in both texture and flavor. 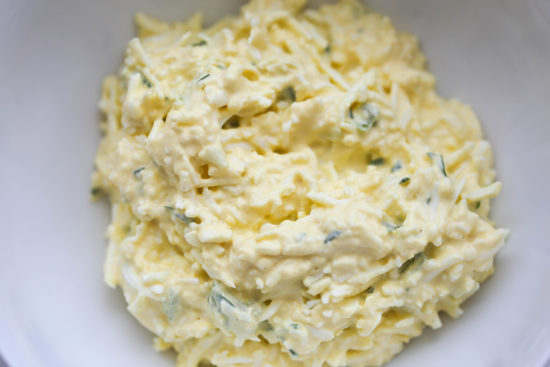 A masterpiece. I love it.

This one just seems like it’s boiled egg and mayonnaise. Inoffensive. But that’s not enough to win Taste Test Thursday.

Best flavor here but the texture of shredded eggs turns me off.

By far my least favorite. Adding parmesan shreds couldn’t even save this one.

This texture throws me off. At first glance I mistook the egg whites for shredded parmesan cheese. Nice flavor, though.

It’s a tie between the dill-filled salad from Eatzi’s and Royal Blue’s mustard-filled salad. Would have been nice to do a tiebreaker *coughNatalieandShawn* but I guess we’ll just have to leave this unresolved. Maybe you can help, reader. If you have a favorite egg salad, hop in that comment section. Anyway, have a wonderful weekend, go outside at some point, and try not to get caught with egg on your face.

Is it the first Wednesday of the month? Is it noon? The city is probably testing its outdoor warning sirens.
By Alex Macon
Conversation With

The former Wingstop leader on why he switched roles, his plans for growth, and more.
By Kelsey Vanderschoot
D Magazine Directories