I wouldn’t call it casual, the beet and smoked strawberry sundae at Homewood—though Matt McCallister’s new endeavor has billed itself as such. Casual is not a dessert with two sides: one side is smoked strawberry ice cream smoothed onto the side of the glass, and the other is beet frozen yogurt. In between lies a chasm filled by beet-poppy-seed cake and batons of crisp, crunchy raw beet and caramelized pistachios. And it comes in a depression-glass-style footed coupe that makes you want to revivify all your grandmother’s cut glassware. No, not exactly casual. Not so much.

But it’s an exquisite expression of the dessert talent which we’ve been denied since the closing of FT33. I asked pastry chef how Maggie Huff came to make this oeuvre, a gem in shades of lipstick pink and fuchsia.

“Well, we have this hearth…” she begins. “I wanted to use the hearth, because I like to work with smoke. I think most people who grow in Texas have that,” she says. “It just adds another bit of depth of flavor. I love the [dessert’s] contrast between smoke and salt, sweet and sour, and it’s full of a lot of textures: raw, crunchy beets. Cold, frozen yogurt and cold sorbet. And crunchy pistachio.”

Initially, Huff had envisioned a rice pudding with emberred strawberries on the drafted opening dessert menu. That was in December. Meanwhile, she says, “We did a beet fro-yo dish at FT[33]. It had kaffir lime, some fried beet chips on it.” She had been asked repeatedly by the staff and diners to bring it back. So, this was a chance to combine ideas. The question became:

This updated spring version is more strawberry-forward. And what color! There’s no added pigment; it’s all from the produce. 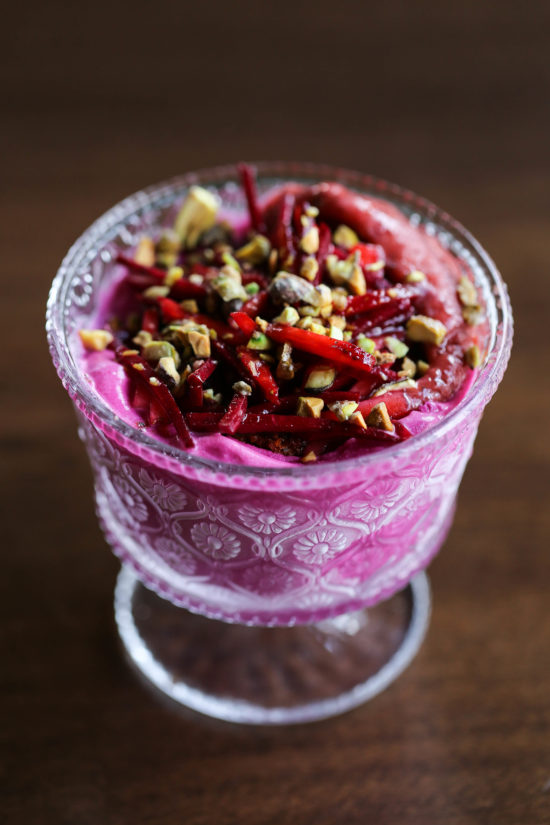 For the beet fro-yo, Huff makes her own yogurt, then blends in hearth-roasted beets and lemon juice. Strawberries are dehydrated and smoked over the hearth during service, and Huff makes an equal batch of strawberries roasted in the oven, broken down with a little sugar until they’re syrupy. These she purees together for the sash of strawberry ice cream, also balanced with lemon. Fresh beet juice brings color to the beet-poppy seed cake; on top, the julienned raw beets and more strawberries are dressed with olive oil, black pepper, and salt.

“The glass really inspired me,” Huff says. And the flavors—“I think beets and strawberries are a natural combo. You’ve got this earthy, sweet-sour going on. It worked in my head, so when I actually did it and it worked, I was like, great!”

As the dessert uses Demases farm strawberries and Rae Lily beets, the limiting factor is the strawberries. “As long as I can get great strawberries, it’ll be on the menu,” Huff says. I say get out there: this means it will likely vanish in a few weeks.