1977 was the year that Star Wars was released in theaters. It was also the year that Jimmy Carter was sworn in as the 39th President of the United States, the year the Apple II (first-ever personal computer) went on sale, and the year Elvis died.

Rod Stewart’s “Tonight’s The Night (Gonna Be Alright)” was the No. 1 song on the year-end Billboard Hot 100 singles list. And Le Cirque chef Sirio Maccioni’s Pasta Primavera was reportedly all the rage in Lower Manhattan.

The average salary was $13,570. The Pontiac Firebird Trans Am was hot, hot, hot. And Debbie Harry’s shaggy bleached locks inspired a trend.

Some of you lived through this. Some of you didn’t. It doesn’t matter, because after that 100-word history lesson, you’re now an expert on the era and we can move on to the point of this blog post: food in Dallas circa ’77.

If you flip to page 101 in your January 1977 issue of D Magazine … what? You don’t have yours? Your sister borrowed it to bring on her recent trip to Scottsboro, Alabama and never returned it? Ugh. I mean, that’s kind of rude of your sister, but don’t worry. We’ll just use mine. 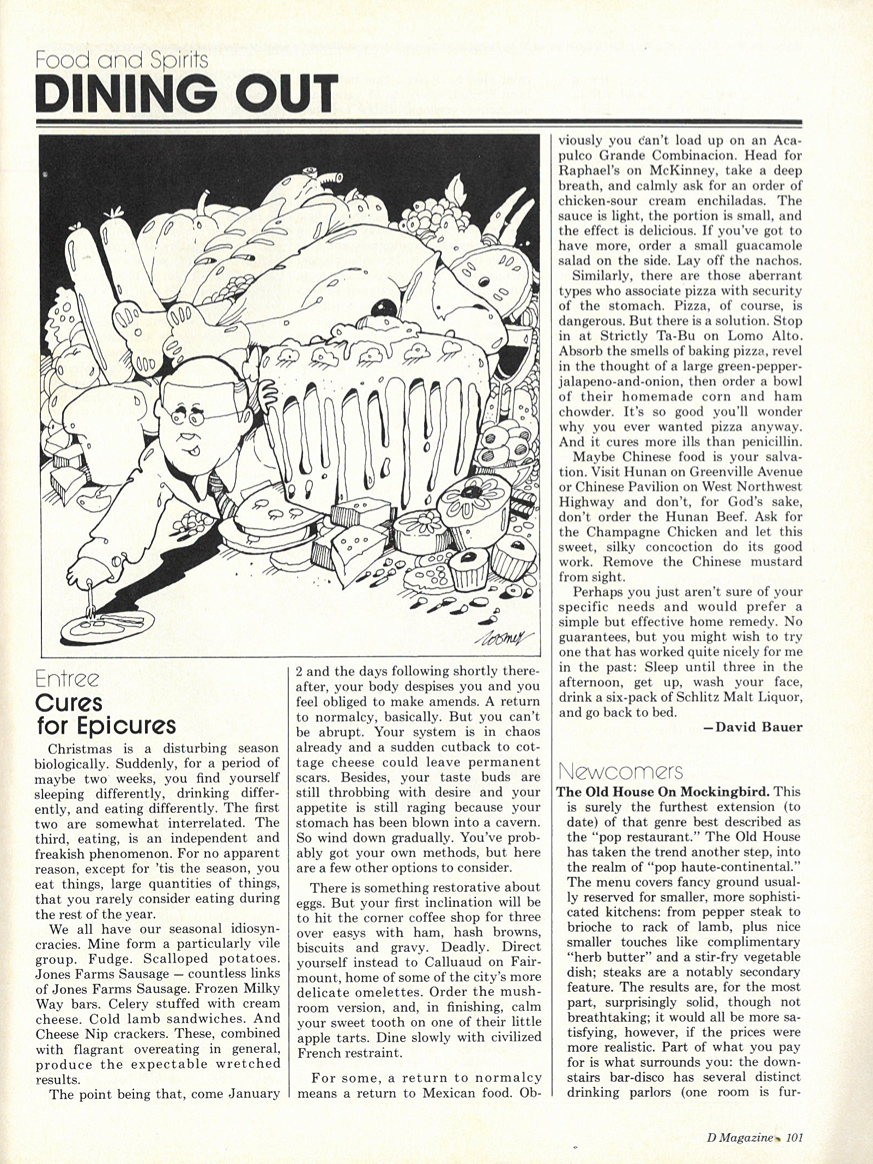 On page 101 you’ll find a story about where to dine if you overindulged on scalloped potatoes and cold lamb sandwiches during the holidays. Here, you’ll discover lighter, healthy-ish meals to aid in recalibrating your diet. One of the suggested dishes is sour cream and chicken enchiladas from Raphael’s on McKinney Ave. Not sure how this is considered healthy. Something to do with the portion size. Let’s just roll with it.

Then, at the bottom of the page, in the Newcomers section, there’s a review of The Old House On Mockingbird. The cuisine: pop haute-continental. I’m not familiar with this genre of food. It kind of sounds like the title of an Adam and the Ants song. (Adam and the Ants was not popular in 1977, so we will not be going into more details. But you can watch a fun video here.) 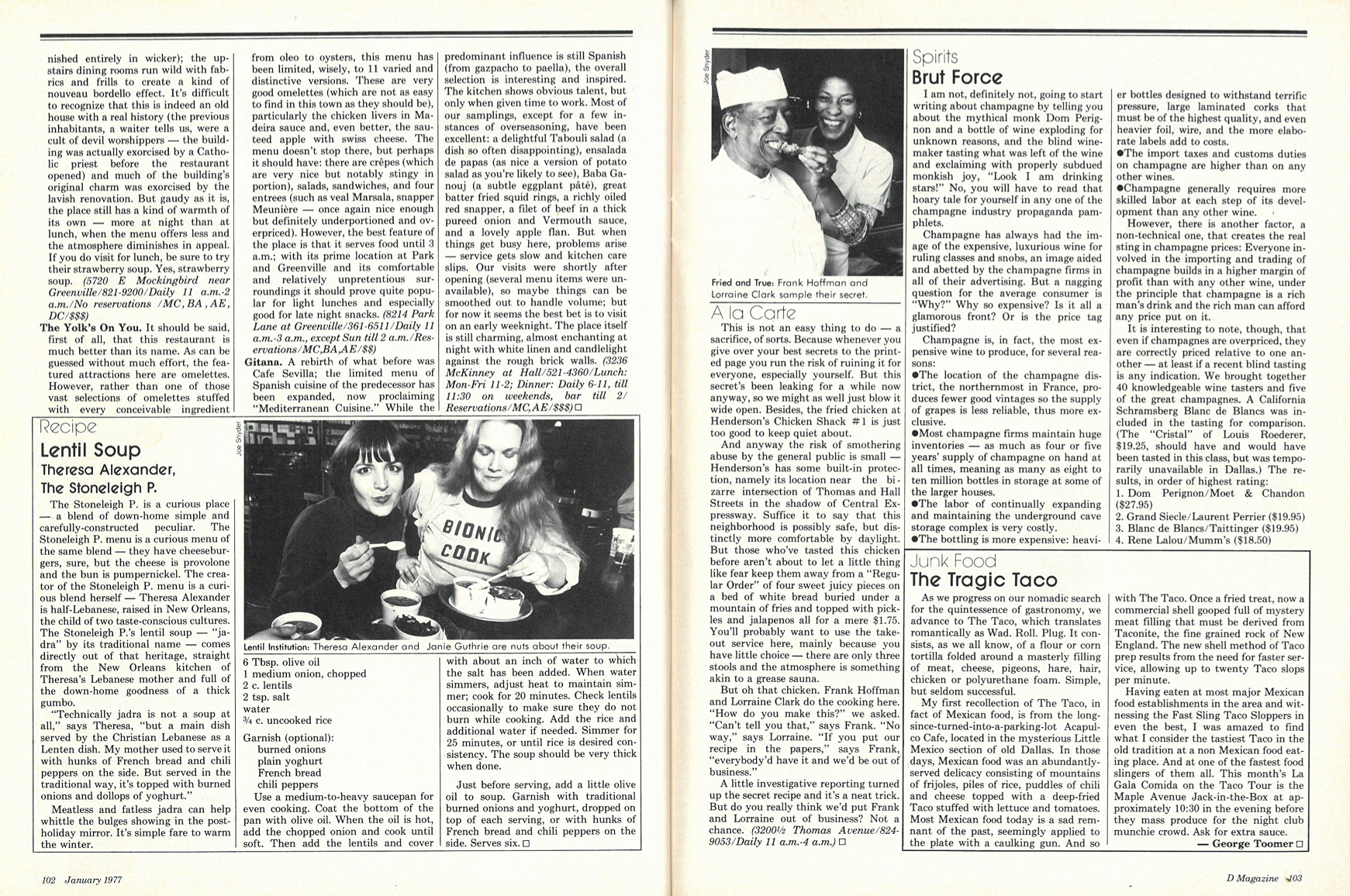 The next mini-review is of a place called The Yolk’s On You. According to the writer, the food at this restaurant is much better than its punny name. And the sautéed apple and Swiss cheese omelette is super delicious.

The next review is of a place called Gitana. It was a rebirth of Cafe Sevilla on McKinney Ave. There’s a “delightful Tabouli salad” and “great batter-fried squid rings” and a “richly oiled red snapper.”

Now, if you look at the bottom of the page, you’ll spot a recipe for the lentil soup at The Stoneleigh P. Make it and tell me how it is.

On the top left side of the page there’s a photo of two smiley people. The smiley woman is hand-feeding the smiley man a piece of what appears to be fried chicken. The caption reads: “Fried and True: Frank Hoffman and Lorraine Clark sample their secret.”

Tell me the secret!

They cook some of the best fried chicken in town at Henderson’s Chicken Shack #1 on Thomas Ave.

The secret is never revealed. Moving on.

There’s a fun-fact blurb about Champagne. And below that, something called “The Tragic Taco.” It’s sort of gross and funny. I’ll let you read it for yourself.

That’s all for today. Hope you enjoyed this week’s installment of Flashback Friday. If you have any fun memories you’d like to share, hop in that comment section, shoot me a text, give me a call, or join me for brunch this Sunday.