Enjoy unlimited access to all of our incredible journalism, in print and digital.
Subscribe Now
Advertisement
Chocolate

When I heard where Five Mile Chocolate’s new origin bar—debuting today—was coming from, I was impressed and intrigued. Tamil Nadu in Southern India: not a place that is commonly associated with cacao. (The country has only been producing chocolate for approximately 60 years and joins newer single-origin designations like Vietnam and Bali.) India produces a miniscule percent of the world’s cacao, and I’d never tried it before.

Jessica Young, head chocolatier at Five Mile Chocolate, knew India from afar as a place her sister spent a year in Bangalore. This was in Karnataka, adjacent to Tamil Nadu, where the Anamalai Farm is located, the estate where cacao is grown on land planted with coconut palms and nutmeg trees. 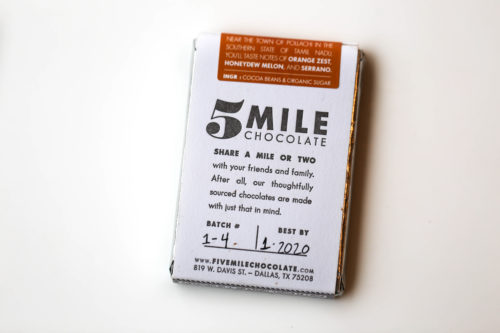 The new single-origin bar will be the culmination of the project launched two years ago with Five Mile Chocolate with a goal to create a line of five single-origin bars that would each represent a distinct origin and flavor profile. Until now, the business that is attached to Oak Cliff Coffee Roasters sourced from farms from which owner Shannon Neffendorf already purchased coffee beans.

“This is an area where Five Mile is going in a different direction,” Young says—sourcing from a farm that has nothing to do with coffee.

As far as Young knows, only one other American bean-to-bar chocolate-maker is making a single-origin bar using cacao from India—the industry touchstone Dandelion, based in San Francisco, which is leading the way in United States single-origin work.

For this, the fifth in the Five Mile line-up that includes bars made from beans from Guatemala, Colombia, the Dominican Republic, and Belize, Young and chief in chocolate production Ashley Hunn narrowed in on the bar’s roast within two batches, each including five distinct trial roasts.

The texture is creamy and smooth, the flavor mellow, fruity, and a touch spicy. The beans themselves are smaller and lighter in color than the others, and more difficult to roast, as they’re not evenly dried. Every new bar that comes out leads to a recursive process in which Young and Hunn assess the rest of the line. Already, the Guatemalan Monte Grande bar has changed quite a bit, according to Young, as they balance the line. The goal, ultimately, with chocolate as with coffee, is to establish a direct-trade relationship for all five bars. Five Mile’s chocolate production is also virtually a no-waste proposition: they compost the shells, which, as of recently, are being used to supplement an orchard planted on a plot of land owned by Neffendorf off of South Kiest Boulevard.

“[The chocolate from] India is very exciting,” Young says. When you know how rare it is to taste any, you have to agree.

A pretzel-studded, peanut butter and chocolate chip cookie is everything we need a baked good.
By  Kathy Wise
Food & Drink

Atlas Bar in Bishop Arts Contains a World of Cocktails

Bishop Avenue’s newest drinking den has a globe-trotting theme, but it actually feels like a welcoming neighborhood bar.
By  Rosin Saez
Chocolate