Enjoy unlimited access to all of our incredible journalism, in print and digital.
Subscribe Now
Advertisement
Dessert

At Deep Ellum’s Magical Dessert Bar, the Glitter Is Gone

Beware. You're paying for bad kitsch and little else.
By Catherine Downes | January 24, 2019|10:20 am
Advertisement

The first time I walked past the Magical Dessert Bar in Deep Ellum, I experienced a visceral reaction. It was months ago—several weeks before the shop had opened. I was struck by a troop of large, plush, unicorns that were attached to clear string and hanging above the entryway.

“What the *f-bomb* is this?” I asked my companion. She shrugged. I pressed my face to the window. The space was dark, so it was difficult to fully assess the situation. I could see a sprawling counter, bright pink walls, and a gang of fuzzy, mythical creatures, with dopey expressions on their faces, flaccidly dangling from a ceiling, which was as pink as the walls.

A couple of weeks later, an Instagram post caught my eye: a tray of brightly colored unicorn cake pops and a caption, which read “Happy Thanksgiving to all our lovely fans. Everything Unicorn. Opening December 1st!” There were a set of gold hooves hovering in the top right corner of the photo.

I quickly scrolled past the image, to avoid throwing my phone across the room. But there was no hiding from Magical Dessert Bar.

There was a media tsunami, mostly glorifying the new, presumably whimsical, enchanting, over-the-top, playful, dreamy, dessert bar. Nearly everybody had something pleasant to say. It is apparently opening a second location in Houston. (If I read the phrase “sweet treats” one more time, I’m going to explode into a billion fragments of not-so-sweet goo. It’s going to be messy, and poor Shawn and Natalie, who sit next to me, are going to be left to deal with what’s left. So, please, stop typing that phrase. Do it for them.)

I knew I had to check the place out. It’s my job, after all. But I’d read Yelp reviews of how people waited, behind other people, for two and a half hours to wrap their fingers around overflowing milkshakes and cupcakes pierced with metallic gold horns. I’m not a huge fan of lines. So, I waited for the hoopla to fade and chose a dreary Tuesday afternoon (this week) to check it out. I figured that’d be a safe time, free of queues. I was right.

The shop is located amid a walk-through patio, between Elm and Main Street, next to the business’ sister shop, Chills 360. The space is lined with dark, wooden picnic tables. (Mine was festively sprinkled with soggy Fruity Pebbles, but we’ll get back to that in a minute.) There is no seating inside Magical Dessert Bar. So, be prepared to ingest your sugary snacks on a plain ‘ol table, next to a plain ‘ol brick wall. Maybe, if you really use your imagination, you can pretend that you’re in a medieval dungeon, or something. That kind of coincides with unicorn lore, right?

The interior is small. There’s enough room to look over the menu, which is displayed on two flat screen TVs; peruse the baked goods; snap an Instagram video of the bubblegum-pink white chocolate fountain; order; and then get the heck out.

Various unicorn figurines and toys line the yellow and purple sponge-painted counter. Glass jars, teeming with marshmallows, are on display. Trays of pink and white swirly doughnuts and heavily-frosted cupcakes, adorned with unicorn horns, scream: “LOOK AT ME!” One of the pink walls is decorated with tiny unicorn stuffed animals— they’re suction cupped to the plaster. Another is decorated with glittery wire birds, flowers, and butterflies. (I’d insert a joke about Michaels and glue guns, but that’s too easy. Instead, I’ll just tell you that it made me feel sad.) 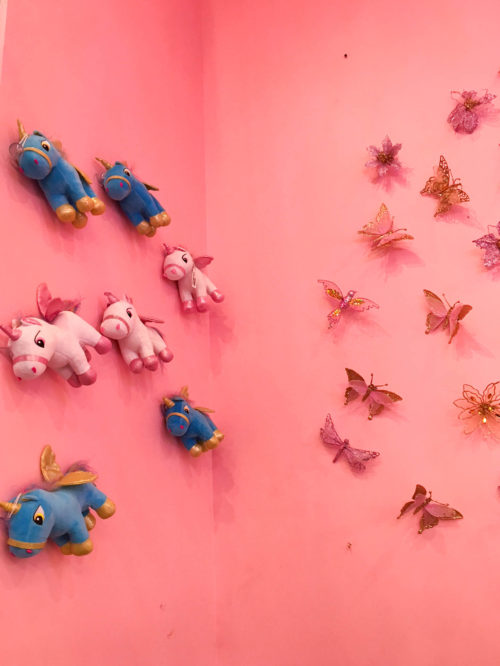 I sat outside at a picnic table—the one I mentioned earlier, which was covered in sticky cereal—and people-watched while I waited on the goods. There was a family celebrating a young girl’s birthday. She was dressed in a baby blue princess gown and was cute as a button. There was a mom, and, presumably a grandmother, with a small boy. He was drinking something that came garnished with cotton candy. There were three millennial-ish girls eating cake and drinking milkshakes. And another family, with small children, doing the same.

One by one, the items arrived. The kebab: three large marshmallows and three medium-sized strawberries, pierced by a wooden stick then coated in white chocolate (that’s been dyed pale pink), and dusted with peanuts and fuscia star sprinkles. Two cupcakes and a doughnut. And then, the milkshake. (It comes with a slice of rainbow cake and a red velvet unicorn cake pop.) I realize that getting the shake to-go messes with the presentation. But, I saw plenty of them that day, so I know what they look like. Tasting it was more important.

It was like slurping melted vanilla ice cream. I’ve had better milkshakes at Jack in the Box. The doughnut was dry. The cupcakes tasted like something you’d get at Kroger. The cake was like being punched in the mouth with a sponge that had been soaked in granulated sugar and food coloring. I didn’t get to try the red velvet cake pop, which was packaged in a clear wrapper, because Caitlin Clark mashed it up with her hands. (Something to do with her throughly enjoying the way it felt, squished, between her fingers. We threw it away after.)

I asked the woman working behind the counter about where they source their sweets. She told me they have an off-site bakery. I called yesterday and was told to call back. I called back and was told to call back again. They didn’t offer a manager’s number to dial, and they wouldn’t take mine. So I don’t have details to share with you. But at this point, it doesn’t matter if they bake these things in the fanciest oven in the universe; these desserts are bad.

They left a bad taste literally, but also figuratively, in my mouth.

Listen, I like mythological creatures, and glitter, and kitsch as much, if not more, than the average person. But this place feels tacky and cheap. It makes me sad that people, with children, would wait in line for this stuff and fork over all that money. It’s overrated (thanks to social media and media-hype) and expensive, for what you get.

You’d be better off picking up some sweets from your nearest bakery, decorating them with glitter and sprinkles and whatever else your heart desires, and creating the magic yourself.

Get a Load of This Unicorn in East Dallas

A Few Incredible Desserts to Eat in Dallas Right Now

A New Documentary Slices Up the Corsicana Fruitcake Scandal