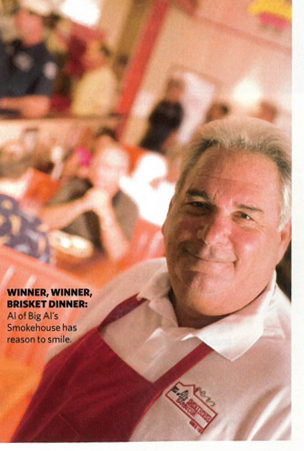 News comes today that Alvin Darrel Plaskoff, the founder of Big Al’s Smokehouse Barbecue on Inwood just south of Lemmon, passed away on November 24 at the age of 74.

According to the memo:

Succeeded by his family, who will continue running the business he started in 1973, Plaskoff leaves behind a legacy of multiple entrepreneurial and communal successes.

Plaskoff was born in Cleveland, Ohio, on Jan. 31, 1944, to Faye and Harry Plaskoff, and in 1950, relocated with his family to Miami, Florida. While attending schools, Al grew up fishing, boating and skiing, even achieving the rank of Eagle Scout. After graduating high school and briefly attending community college, Al moved out of Florida and began marriage and work in Dallas, Texas.

While raising a family, Al spent the late ’60s and early ’70s as a meat salesman for Farmer’s Meat Market in downtown Dallas. This was when Al first sold briskets, hams and other meats to a considerable array of now-popular barbecue restaurants.

Al purchased his first restaurant in 1973, naming it Big Al’s Smokehouse Barbecue, and continued outsourcing meats to fund his brainchild. As a businessman, Al went through great lengths to ensure customer access to all prime cut meats. He even introduced Beef Ribs to the Dallas barbecue scene as a daily menu special and gained popularity for it.

Big Al’s has been a D Magazine favorite for years. Here’s a story from 2005, in which food writer Scott Craig calls the spare ribs some of the best he’s had. Craig describes the barbecue as holding its own with what could be found in Central Texas, a quality of brisket that took at least another half-decade to proliferate throughout the city.

When I saw the cars glutting the parking lot at Big Al’s Smokehouse (3125 Inwood Rd. 214-350-2649), I thought, “All of these people can’t possibly be here for barbecue.” I was wrong. The place was packed. It seemed as though everyone knew about Big Al’s but me. Near the beginning of the cafeteria-style line was a framed t-shirt autographed by Rod Stewart, commending Big Al for his barbecue. Endorsement from an aging English rock star? Not a good sign.

The sausage, from Rudolph’s, had that maker’s characteristic quality. But Big Al’s did its part by laying a healthy dose of hickory smoke on the links. The spare ribs were some of the best I’ve had in this barbecue tour. The smoke penetrated deeply into the meat, which had great pork flavor and no brininess. The meat remained firm, but not at all tough, with a gorgeous mahogany bark on the outside. Very nice ribs. The beef ribs were also winners. Strong smokiness and a bold beef flavor had me gnawing them down to the bone.

And then there’s the brisket. When I told the pit boss I wanted fattier brisket, he swept aside the decent-looking flat sitting on the cutting board, pulled out a fresh fatty side of brisket, and took the slices right off the gloriously caramelized end. This was the closest thing to eating brisket I’ve had in Dallas—moist, strongly smoky, and with a sweetly blackened crust. While it wasn’t equal to the best brisket I’ve had in Lockhart, it was competitive with the Lockhart average, which is no mean feat. If this was a fluke, so be it, but it’s in the running for the best barbecue meal I’ve had in Dallas.

The restaurant also made the cut in our September 2016 barbecue roundup more than a decade later.

Al Plaskoff has owned and operated Big Al’s Smokehouse BBQ since 1973. While at one point there were five locations of the no-frills barbecue restaurant, the only one that remains is located just southeast of Lemmon Avenue, on Inwood Road. The interior is quintessentially barbecue, with red-painted walls covered in kitsch and memorabilia and clunky wooden tables sprawling across the dining room’s concrete floors. There was no line when we visited, rather a steady flow of men and women dressed in business wear circulating in and out of the restaurant with to-go orders. We found the brisket palatable. The thin rim of fat covered by a black charcoal-y bark was soft but flavorful. The heavily marbled meat was tender enough to easily part with a finger tug. The pork ribs are smoky, slightly sweet, and tender. But the traditional choice of devoted customers is the chopped beef sandwich, with a mound of fatty brisket piled on a soft bun. Topped off, of course, with a hello from Al, who, after 40 years, is still in his restaurant just about every day.

Al’s memorial service will be held at the Temple Emanu-El of Dallas at noon, on Tuesday, November 27.