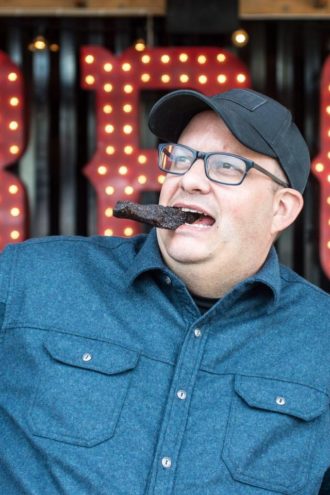 Barbecue continues to be a hot topic of conversation. It also sells books and magazines. Daniel Vaughn was once a regular guy with a day job as an architect and a family. Eating barbecue was his hobby. He started a blog, Full Custom Gospel Barbecue, to chart his experiences. Little did he know then he would be tapped by Texas Monthly as the first barbecue editor in the city and regional magazine business.

Last week I checked in with Vaughn to see what he’s been up to. Here’s what I learned.

NN: I remember the old days when you had a real job and wrote a barbecue blog called Full Custom Gospel Barbecue. What made you start a barbecue blog?

DV: I still have a real job, I just don’t write about barbecue for free anymore. I started Full Custom Gospel Barbecue in 2008. It was a personal endeavor to keep track of my own barbecue travels. I wanted to keep a log of everywhere I’d tried so I wouldn’t have to repeat any mistakes. It took a year or so before I realized other people were using my opinions to guide their own travels.

NN: How did you get people to read your blog about barbecue? Was there anybody else doing anything like it?

DV: There was a dormant blog out there by Tex Smith (a Texas musician) that I used as inspiration, and Scott at dallasfood.org had done a few tours through Central Texas. I didn’t know of anyone else who was doing current barbecue joint reviews when I started. As for readership, there was a huge jump when a story about American barbecue spent a weekend on CNN.com in 2009. The first photo was of me eating sausage, they quoted me for the first line, and added a link to the blog in the first paragraph. From there, I used Twitter and Facebook to sustain readership.

NN: What made you fall in love with barbecue?

DV: It was a bite of brisket at Louie Mueller Barbecue in Taylor on Saturday morning, August, 19 2006.  I was on a trip with my friend Sam Watkins (who wrote up everything in the link above) to Central Texas. I mentioned dallasfood.org. Scott was very critical in his write-ups of Dallas barbecue spots but praised those in Central Texas effusively. I still remember his rating system started at “dog food grade.” Sam and I both wondered what all the fuss was about in Central Texas, so we planned the trip around the 2003 issue of Texas Monthly’s Top 50. By the end of the trip, we were convinced of the unquestioned superiority of Central Texas barbecue. So much has changed since then.

NN: You and I worked together on barbecue features. I think I gave you your first magazine writing gig. In fact, I remember we discussed putting on a barbecue festival here in Dallas. Tell me that was the turning point in your career and I should be at the attorney’s office when they read your will.

DV: Sorry, Nancy. There won’t be much in the will now that I’m a journalist. You most certainly gave me my first real writing job. I called you after the CNN article came out and suggested it. I remember an “interview” with Tim Rogers to question my bona fides. His eyes glazed over when I started talking about wood-fired smokers versus gas-fired ones, and I guess he gave you the green light. That assignment sent me all over the Metroplex looking for the best barbecue in the area. I remember starting out naively thinking that I would find some hidden gem on par with Louie Mueller.

NN: When Texas Monthly came to you and offered you a position as barbecue editor, how long did it take you to make the decision?

DV: The pay sucked and still does (that’s the case for most journalists), but they offered to cover my travel and food, which was huge considering I’d done it for free for so long. I called my wife and assuaged her fears and she gave me permission to take the job. It was a long couple of months at my architecture firm before I could hand in my resignation. My wife joked when she bought a car last year that she could have been searching through the Lexus and BMW websites if I’d kept my old job. Actually, she wasn’t joking, but we all love our Nissan.

NN: The timing of your new job was perfect and a smart move by Texas Monthly. Looking back, it seems like the barbecue scene in Dallas blossomed about the same time you started your job.

DV: Jake Silverstein was the editor at Texas Monthly who hired me, and he had some brilliant timing. I’d like to think that the attention and importance brought to barbecue by that bold move helped sustain the barbecue boom. I figured then that we’d have peaked by now, but there’s more new and great barbecue across Texas and the whole country now than ever before.

NN: Obviously, the meat offerings at newer barbecue joints have increased. I admire places like Cattleack BBQ for smoking almost every type of meat available. Can you give us some insight into the trends that have taken place over the last five years?

DV: Cattleack is special because they do so much, and do it all so well. Some of their specials also epitomize the trends that we’ve seen in barbecue. They do pastrami and pastrami beef ribs occasionally. All their sausage is house made, and their smoked turkey breast is a great cut that has become nearly ubiquitous across Texas barbecue joints. One trend that I predicted would catch on that just hasn’t is smoked lamb. There’s a long history in Texas of raising lamb and mutton, but it’s hard to find at barbecue joints.

NN: I follow you on social media. You eat a lot of barbecue. You’ve traveled all over the US and hopped the pond as well. What kind of reception do you find in far away places?

DV: It all depends. In the historically great barbecue joints outside of Texas, they rarely know or care who I am. Then again, I’ve been invited to Sweden to help teach a barbecue class. I’ve been invited to Madrid to taste barbecue from a new barbecue joint, and I helped connect several overseas pitmasters with Texas talent for mentorship. I think for those who want to improve, my opinions are honest and well-received whether in or outside of Texas.

NN: I have some concerns about the popularity of barbecue and the people who dedicate their days and nights to smoking and selling it. I fear all these dedicated people are going to develop lung cancer from the smoke, high cholesterol, and other health issues. Do people in the business talk about this?

DV: Lots of pitmasters eat barbecue only occasionally, so their excess cholesterol probably comes from elsewhere. The smoke and exhaustion are real factors. Theoretically, I would wear a mask of some sort if I worked in it all day. As for exhaustion, pitmasters need to be able to train folks to help. It’s probably the most difficult part about being a barbecue joint owner. Convincing any employee to care about the product as much as the owner is nearly impossible.

NN: You’ve got a steady job, you’ve written a great book, you have a lovely family, and you eat a lot of free barbecue. What’s next for Daniel Vaughn?

DV: Well, I (technically Texas Monthly) pay for my barbecue. As for what’s next, I struggle with writing, and I’m always looking to improve. Research is just so much more fun. We’re also looking to diversify my position at Texas Monthly to include more barbecue videos, and we’re exploring what we’d like a barbecue podcast to sound like. Maybe I’ll land a TV show. Who knows?

The Best Barbecue in Dallas