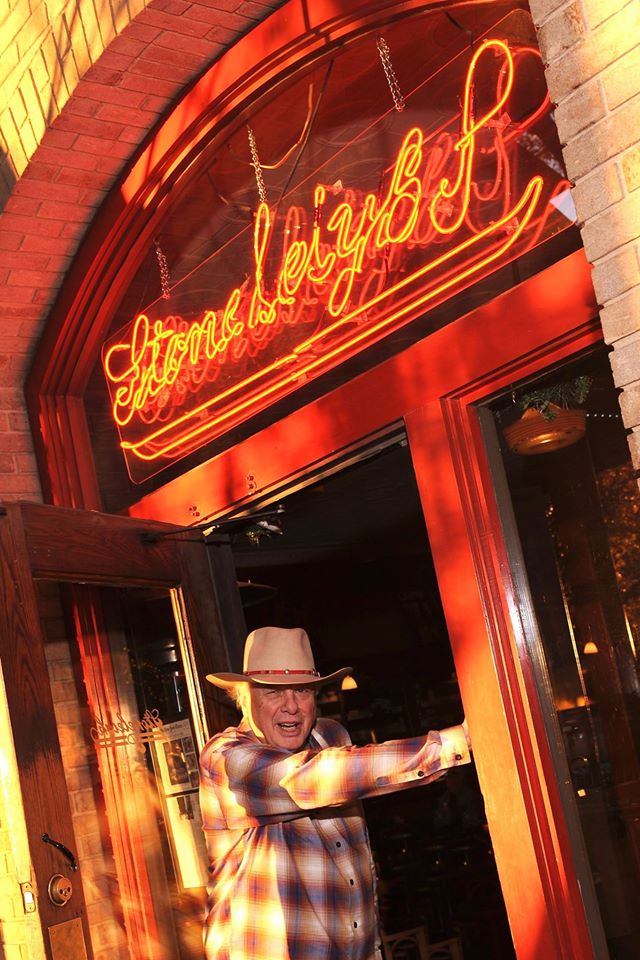 Earlier this week, Amy Severson and I attended Pour Yourself into History event at the Stoneleigh P. The event is just one of the many programs run by the Dallas Historical Society.  They also offer as series of Brown Bag Lunch Lectures and the Hall of State and Historic City Tours. But this night was dedicated to listening to Tom Garrison, the man behind the legendary bar and restaurant, talk about the history of his place.

Over 70 people showed up to hear Garrison brief story on how the Stoneleigh P came to be. “I bought this place 44 years ago,” Garrison says. “At first it was a center for the counter culture and an artists hangout.” He went on to detail some of the wild bar-top-dancing parties that went on and refrained from naming names of the rich and famous who partied there. “We had marathon dance parties and people danced until they almost died,” Garrison says. “I admit I’ve been behind the bar in drag more than a few times.”

In 2005, Garrison told me he took over the Stoneleigh Pharmacy, the tiny drugstore across from the Stoneleigh Hotel, with a “leaking roof and rats the size of puppies.” He hired photographer Mike Moran to photograph the shelves of the pharmacy in the Settles Hotel built in 1920 in Big Spring, Texas. He recreated the feel of a pharmacy by lining one wall with the pictures. He smudged out the “harmacy” on the sign and left the P. The eclectic interior is still cluttered with old Coca Cola signs (one in French) rare jukeboxes (a Pakard Pla-Mor with a selection of 78 rpm records “when it works”), and neon beer signs. Garrison has a long history in the restaurant and bar business in Dallas. He was partners with Gene Street and Phil Cobb when they open J. Alfred’s in the early ’70s.

This night he rambled off a long list of places he’s been involved in. They included Strictly Tabu, Greenville Bar and Grill, Prospect Grill, Brazos Grill, the short-lived Clouseau’s (anyone remember the blue chicken?), and Bar Tejas. In 1980, Garrison got a call in the middle of the night. The caller lived across the street from the P. She said, “Tom, your place is on fire.” He asked her if it was in the front or on the top of the building. He figured if it was in the front, the fire department would take care of it. Instead, he tumbled out of bed and got to the restaurant in time to watch the place burn to the ground. “I didn’t find out until 15 years later that the fire was started by one of my employees,” Garrison says. “In fact, he was still working for me at the Greenville Bar and Grille. Anyway, we rebuilt and here we are.” From the get-go, Garrison gained the reputation of a curmudgeon by refusing to serve French fries (“Hey, they cost money!”), Coors, and ketchup. I remember sneaking in ketchup when I went in for a classic flame-grilled burger served with provolone cheese and grainy mustard on a fluffy pumpernickel bun.

But Garrison has changed with the times. Now he offers fries and ketchup. Blame it on his daughter who Garrison hopes will take over the reigns when he’s ready to get out from behind the bar. “She said ‘Daddy you do this so I don’t have to take the blame’, “Garrison says. Until then, Garrison hinted that he was getting into the barbecue business. “Hell, I may even serve it here,” Garrison says. I say bring in the barbecue and bring back the marathon dances. I’ll buy a round of Coors for the house.

Before it became a posh office park, it was a halfway house.
By Tim Rogers
Dallas History

With the Academy Awards a few weeks away, let's take a look at the Dallas Library's archives to see a few times the stars came to North Texas.
By Brandon Murray
Dallas History

This was once the home of the Wichita, Comanche, Caddo, and Cherokee tribes. Let’s take a look through the Dallas Public Library’s archives.
By Brandon Murray
D Magazine Directories