From its exterior, the James Beard House may appear ordinary, just another lux-brownstone sandwiched between two multifamily properties in Manhattan’s Greenwich Village neighborhood. But, like so many buildings in New York City, its interior is charming and full of memorabilia from Beard’s remarkable past when he called this dwelling his personal home. 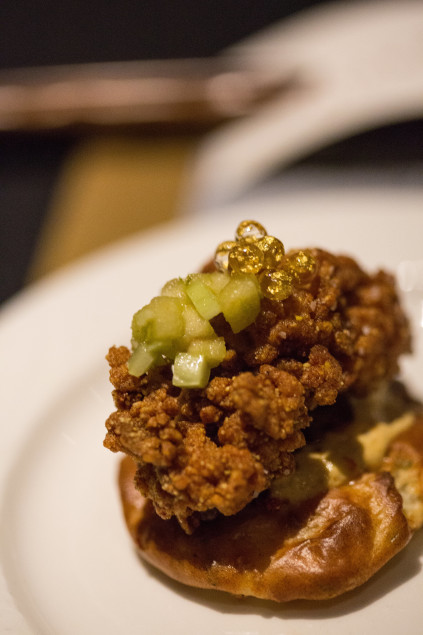 Owing to Beard’s impact on the culinary ecosphere, chefs from around the world seek to become part of this building’s legacy and, given Dallas’s recent emergence as a gastronomic epicenter, it’s not a coincidence that chefs from our city continue to be invited to cook in this admired location. Nick & Sam’s Executive Chef, Samir Dhurandhar, already has numerous accolades to his name, and on the twelfth of March he will add yet another by presenting a six-course menu that is worthy of such a significant backdrop.

This past Friday I was invited to a private sampling of what’s to come, and I guarantee that anyone that makes the trip will not be disappointed. In order to properly manage expectations, Chef plans to greet everyone with Armand de Brignac’s “Ace of Spades” brut (which currently retails at one hundred fifty dollars per glass) which will be paired with a quad of passed appetizers, my personal favorite being a gently-fried oyster with barbecue beef bacon and apple fennel slaw.

Over the remaining five courses, Chef Dhurandhar will showcase some of the finest ingredients in both Western and Eastern cuisine including, but not limited to, Bluefin toro, black truffles, caviar, bottarga, Australian Wagyu short rib, Chilean sea bass, king crab, oxtail and the star of the evening, Ohmi Wagyu tenderloin from the Shiga Prefecture in Japan (believed to be the official Wagyu of the Imperial Family). Each course will be judiciously paired with wines selected from California, Washington and Oregon, as well as Graham’s Tawny 10-year port which, by definition, hails from Portugal.

For those interested in attending, tickets are limited in supply but may be purchased through the James Beard Foundation. (Spoiler Alert: full menu is on the website).

Today, June 25, is Anthony Bourdain Day, which is the late chef and world traveler’s birthday. Let’s look back at some of ways the beloved culinary thinker touched Texas.
By  Rosin Saez
Food & Drink