Drink This Now: French Press Cocktails at The Theodore

The team is also playing with off-the-menu elixirs. 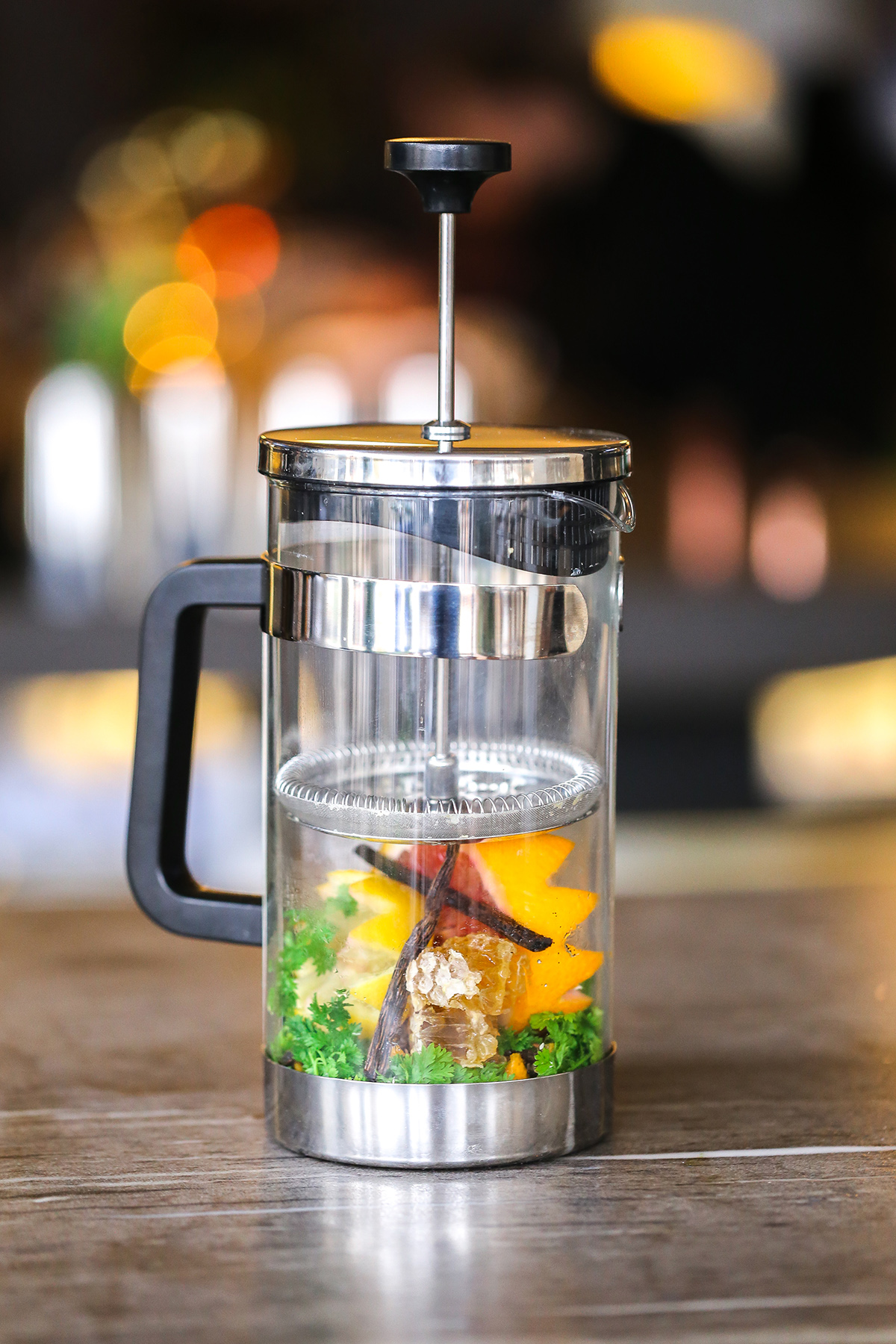 “It’s kind of nice working this close to a Williams-Sonoma,” Hilla says as he pulls out a newly purchased French press. The gadget that is traditionally used to make coffee has been transformed into a cocktail-infusing tool. 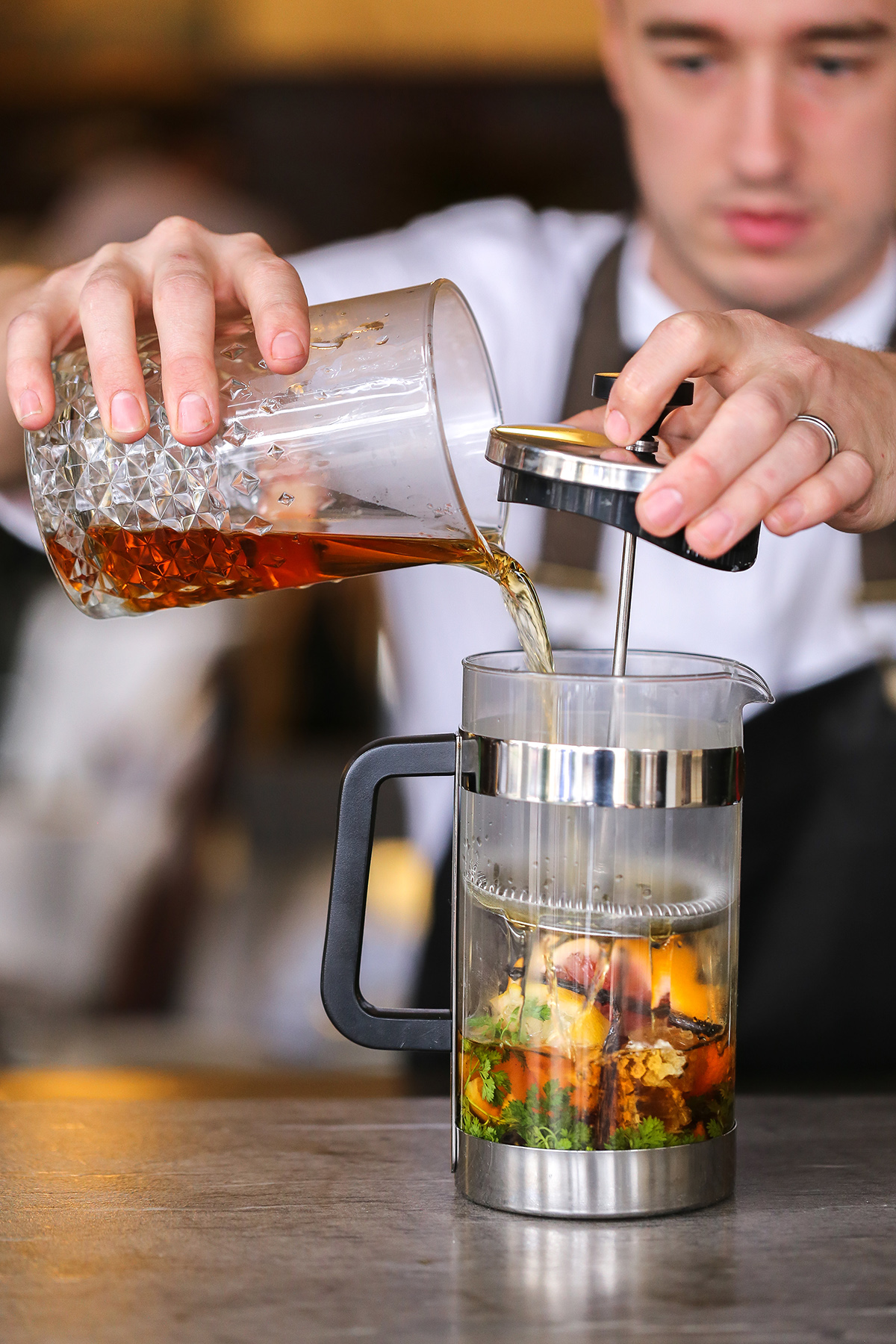 Bartender Mario Hernandez has created an off-the-menu French press cocktail called the Hot Teddy. The drink is a warming blend of seasonal fruits, spices, and spirits. 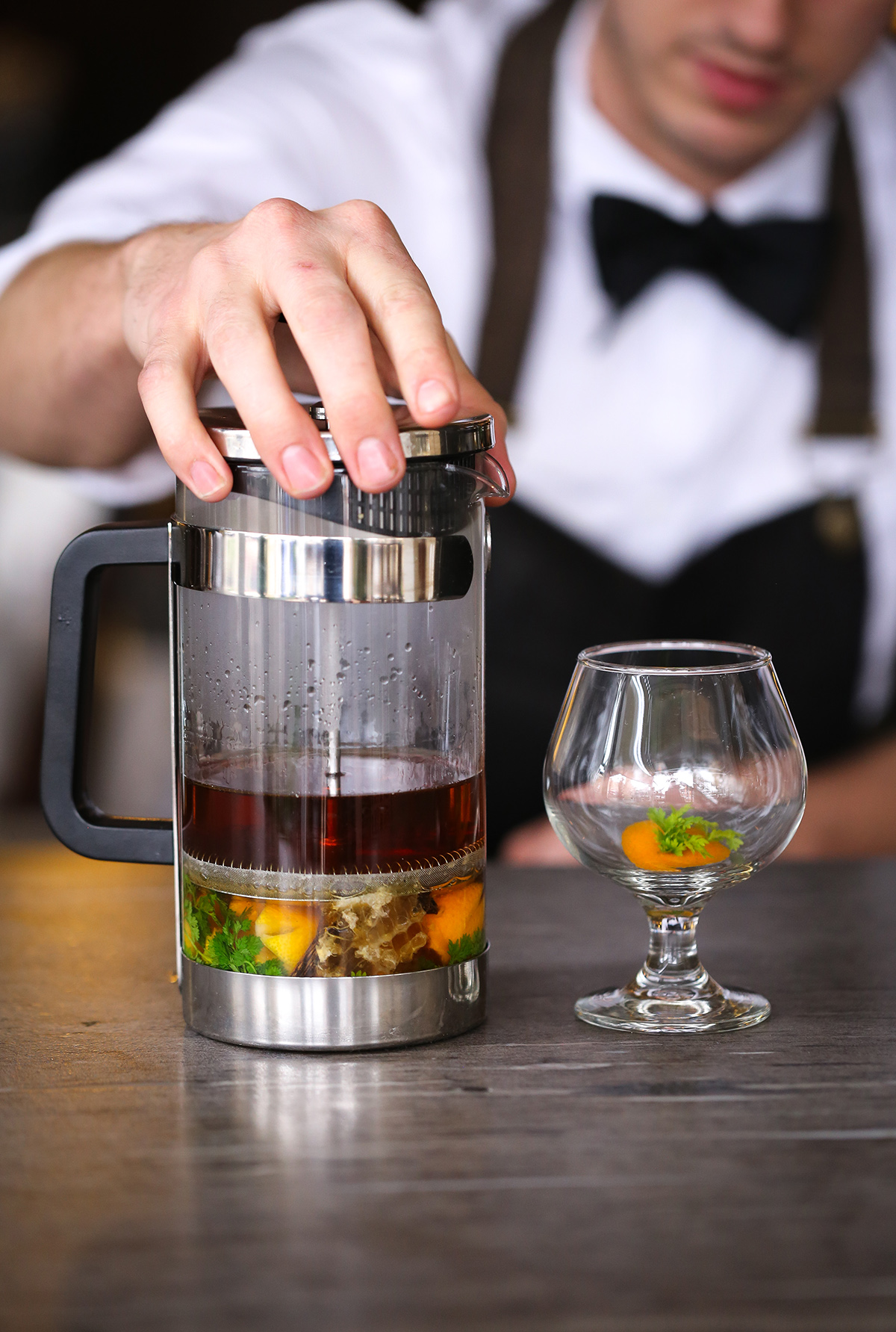 Blood orange, lemon, honeycomb, vanilla, cinnamon, and chervil are placed in the bottom of the device, and a herbaceous mix of Rémy Martin VSOP, Cynar, Grand Poppy, Bénédictine and Hot Water is poured on top. “[It’s] a bitter and seasonal Hot Toddy that could be shared by a couple of people,” Hernandez explains. The drink costs $25. 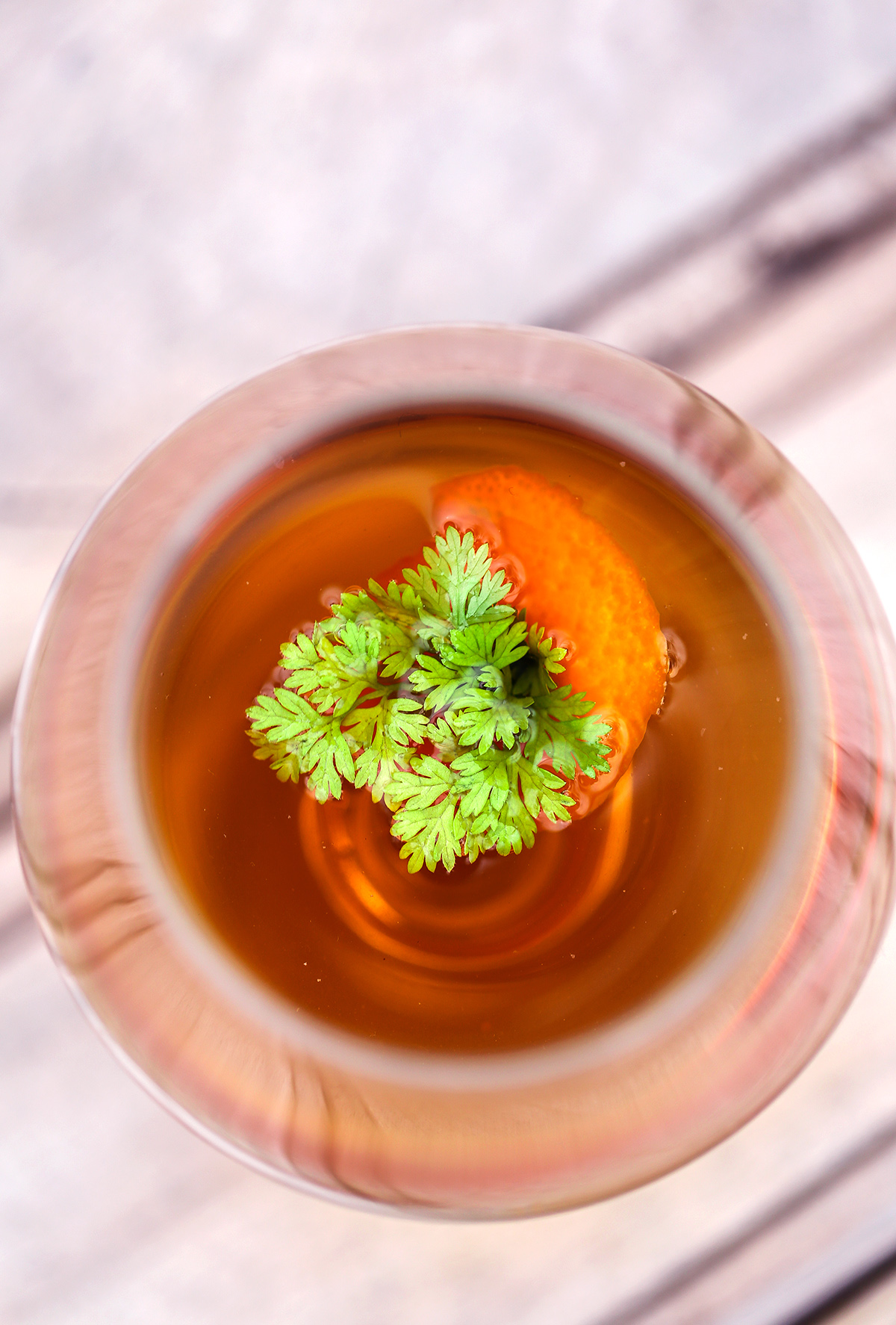 The bar is also featuring a rotating selection of Porthole-infused cocktails. Bartender Justin Payne recently dreamed up a winter warmer called Dig My Fig. The drink comes served in a Porthole and is a seasonal blend of Knob Creek rye, Rémy Martin VSOP, Cherry Heering, Carpano Antica vermouth, Allspice Dram, and Peychaud’s bitters. The cocktail is infused with figs, cranberries, and ginger.

“I wanted to take the spices and smells that I associate with winter and Christmas and make a boozy cocktail that our guest could share during this crazy time of year,” Payne explains. The cocktail costs $30 and is meant to be shared. 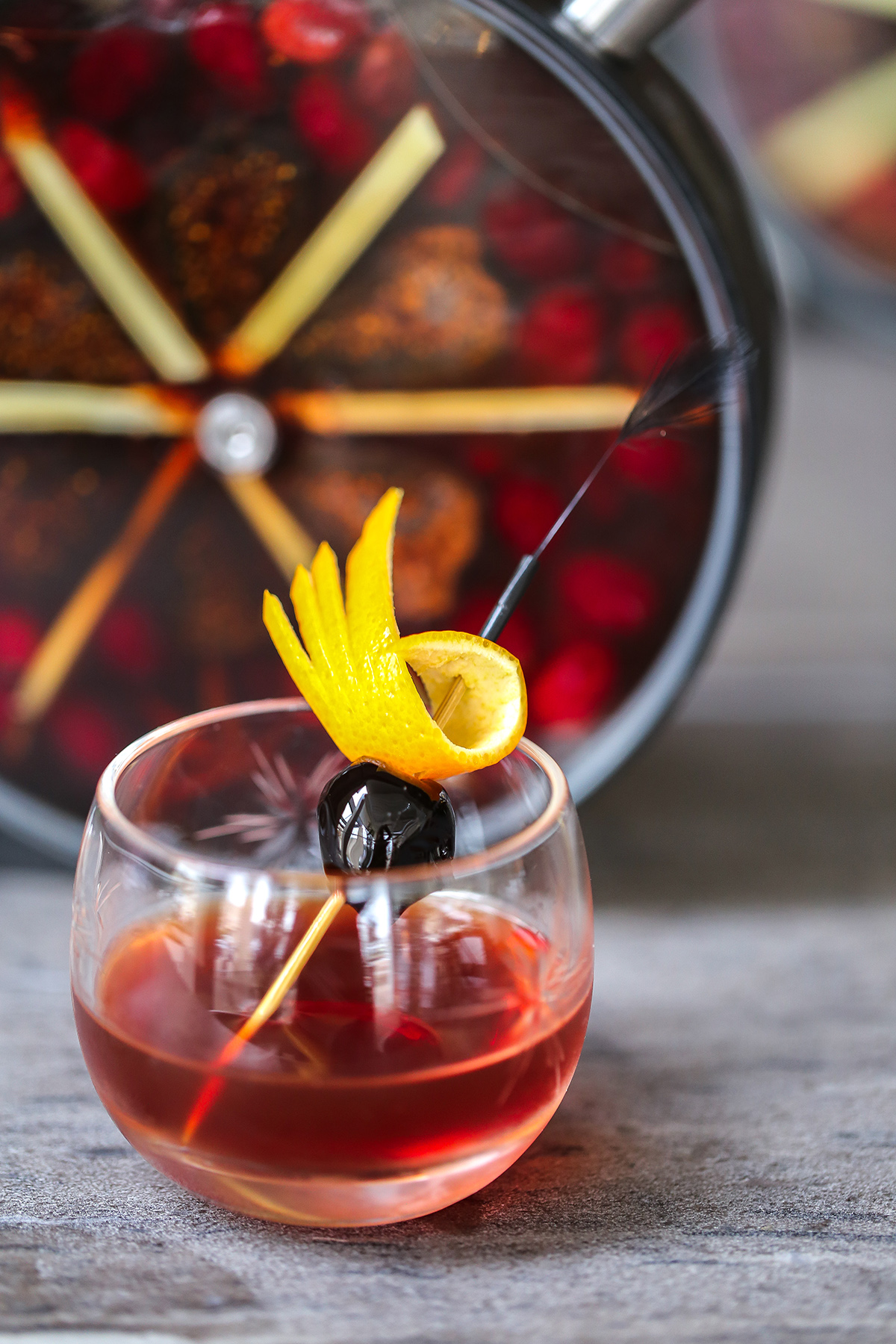 Here’s Where to Watch the Red River Showdown in Dallas

Whether you're a diehard Longhorn or lifetime Sooner, Dallas has options for everyone to watch the iconic collegiate rivalry game.
By Taylor Crumpton
Arts & Entertainment