Last Thursday, the talented kitchen at SĒR was challenged to fashion a menu to pair with five elegant and sophisticated Champagnes.
By  Wes Wells | November 19, 2015|9:00 am
Advertisement 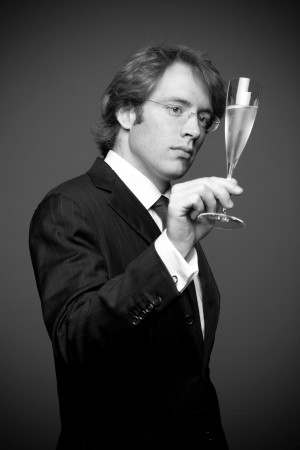 SĒR Steak + Spirits, the elegant three-years-young restaurant that sits atop the Hilton Anatole’s north tower, is undergoing a staffing change. Owing to the August departure of Anthony Van Camp, who was promoted to the role of executive chef at Hilton Dallas Lincoln Center, sous chef Benjamin Maulsby has earned a more established role. He now works alongside executive chef David Scalise and Food and Beverage Director, Saddiq Mir. Last Thursday, this team was challenged to fashion a menu to pair with five of the most elegant and sophisticated Champagnes originating from one of the few remaining family-owned Champagne houses in France: Taittinger.

Taittinger (pronounced “teh/ta~/zhay”) is located in Reims, France, approximately forty-five minutes from Paris by way of bullet train. Situated in the Northwest quadrant of the Champagne region, Taittinger traces its rootstock back to 1734. Pierre Taittinger took control of the flourishing business in 1932, and the family has retained a tight grasp ever since. Modern day brings us a portfolio of 10 unique iterations, none of which have scored lower than ninety points by Wine Spectator.

Clovis Taittinger, the thirty-seven-year-old son of the current patriarch, spends nearly half a year abroad teaching the art that is his family’s Champagne. To Clovis, the environment and the immediate surroundings in which Taittinger is consumed is as important as the quality of his twice-fermented and riddled libation. During the evening, he spoke romantically about Champagne as if it were more of an emotion than a beverage. With sincerity, and with a thick French accent, Clovis wished all in attendance that the evening be “a night of friendship by way of Champagne, who acts as a missionary of happiness. A missionary of love.”

Chef Maulsby showed similar adoration with a pairing menu that consisted of scallops with spiced yogurt, Jidori chicken with apricot, roasted leeks, and brussels sprouts, a Japanese-influenced Mero sea bass, Texas-seared venison with kaffir cauliflower puree, and a final selection of cheeses including buratta, Sharp Shooter cheddar, Juliannagoat cheese, and a mild, buttery Karst. Each dish was meticulously paired with one of Taittinger’s signature bubbles.

In isolation, my preferred Champagne was the recently released 2006 Comtes de Champagne Blanc de Blanc consisting of 100% Chardonnay grapes from Grand Crus vineyards in the villages of Côte des Blancs. The 2006 vintage recently earned 97 points by Decanter Magazine, and Taittinger himself admits it’s their finest production, noting it pairs perfectly with caviar and oysters.

The most pleasurable pairing came by way of the Taittinger Brut Prélude Grand Crus and Maulsby’s Jidori chicken. Prepared sous vide at one hundred fifty-two degrees for four hours, and then quickly grilled over hot mesquite, the breast displayed a light pink hue, and retained an immense amount of moisture thanks to the technologically advanced preparation. The blend of equal parts Chardonnay and Pinot Noir grapes provided a full body, and displayed notes of cinnamon and clove which paired beautifully with the earthiness of the dish.

SĒR plans to add executive chef Mike Shetsky to the kitchen staff on November 26, so be mindful of prospective menu changes. That said, I wouldn’t expect SĒR to venture too far from what people enjoy, which is a modern steak house menu that is sleek but not too masculine. The view is one of the very best of Dallas’s renowned downtown skyline, and the entire atmosphere fosters a warm sense of Texas pride when enjoyed with an elegant bottle of wine and traditional steakhouse fare.

Today, June 25, is Anthony Bourdain Day, which is the late chef and world traveler’s birthday. Let’s look back at some of ways the beloved culinary thinker touched Texas.
By  Rosin Saez
News Bites