We've got the dish on barrel-aged cocktails, oysters and guest chefs, as well as an Instagram montage of recent eats around town.
By Lauryn Bodden | August 4, 2014|4:29 pm
Advertisement

Last week Oddfellows was dubbed one of Yahoo Travel’s top ten U.S. restaurant “worth the wait,” LYFE Kitchen opened their third Texas installment in West Village with what seemed like a movie premiere bash, Ramen Hakata and Hanabi Ramen & Izakaya joined the Ramen ranks and more breweries found some reasons to celebrate (we don’t mind that at all).

Here are a few more things you should know about for a little food news update…
This week, Jack Perkins of The Slow Bone is taking a vacation from making some of our favorite meats in town, but don’t worry, because he is leaving the business to some interesting replacements. Every day starting tomorrow, different Dallas restaurant affiliates will become “Jack for a Day” and donate their “salaries to worthy causes.” Participants include Matt McCallister, Chad Houser, Alice Laussade, Daniel Vaughn, Robert Wilonsky and Harry Wilonsky. Visit the shop from 11 am to 1 pm daily or until they “run out of patience” to see who’s playing Jack for a Day.

Fearing’s is rolling out a new summer bar and wine menu courtesy of Jason Kosmas of the 86 Co. that will have you bouncing up and down in your seat. Jumping on the barrel-aged cocktail trend, Fearing’s and Kosmas crafted drinks including batches of Rattlesnake (Tequila Cabeza, Herbsaint, Local Honey and Grapefruit Bitters) and Ancho Negroni (Fords Gin, Ancho Reyes, and Bonal Gentiane Quina) that are available for the next six weeks at $13. Other summer cocktails like Dean’s Margarita, Caught Red-Handed, Fearing’s French Fizz and White Peach Sangria are available for $12.

Another Week, another national holiday to commemorate. This Tuesday, August 5 is National Oyster Day and we have two places to celebrate. MAX’s Wine Dive’s Dallas and Fort Worth locations will serve Nacho Mama’s Oysters with fried Gulf Coast oysters on wonton “chips” for dinner at $10 for half a dozen and $19 for a dozen. Pair that with a glass of Moët Impérial Champagne to round out the meal. Across town, UrbanDaddy and Driftwood are teaming up to create Oyster Shell Shots, four oysters paired with absinthe, Mezcal, scotch, sherry or sake for $15. Guests can plop down at the bar, throw back an oyster and allow the bartender to fill their empty shell with a drink of choice. Regular oysters will be available for $1 as well.

LARK on the Park just announced a spirits dinner on August 18 with The 86 Co. dubbed “86 & Noise.” As you can guess from the name, expect an edgy vibe with tastings of four 86 Co. spirits (Tequila Cabeza, Fords Gin, Cana Brava Rum and Aylesbury Duck Vodka) during a cocktail hour, followed by dinner with four cocktails and four courses. Bar manager Matt Orth and chefs Melody Bishop and Dennis Kelley will co-host the night with Jason Kosmas and Omar YeeFoon to bring tasty libations and plenty of good feelings.

Eventually summer has to come to an end, and the Design District Market at Dallas Contemporary seems like a great way to wipe away those tears. the unique indoor and outdoor summer event not only celebrates the Design District’s community of local businesses, artists, and artisans, but also highlights shops from all around the Dallas/Fort Worth area. Get there early on August 23 to the cool off from the Texas summer heat in the Progressive Waste Solutions customized “Dumpster Pool.”

@ramosri and his dad celebrated with Emporium Pies and I just want to let him know, who couldn’t go weak at their knees when staring down the cinnamon apples of Lord of the Pies? 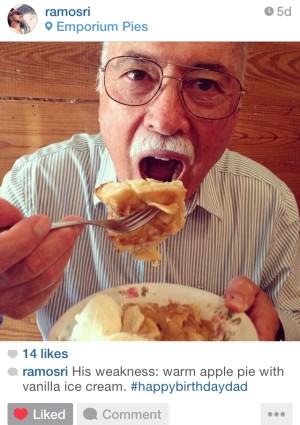 I have a thing for nachos and this has my name all over it. Fries and nachos…Thank you Goodfriend Beer Garden for being so good to us and @kharden86 for sharing. 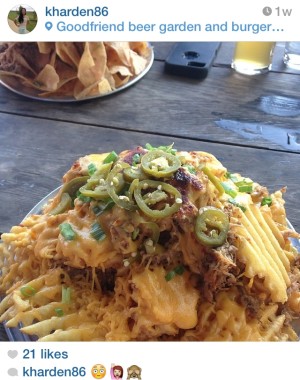 Come Taco obviously dishes out some well-known tacos, but who knew their burgers could look (and apparently taste?) so heavenly too? 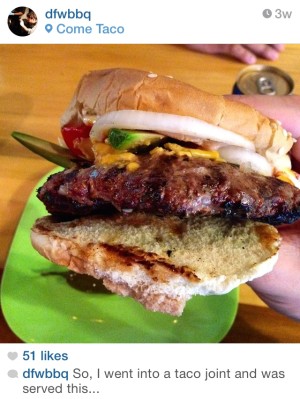 @phileats_ gave us a sneak peak of Ramen Hakata and I am currently drooling. 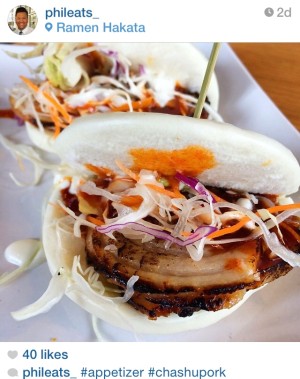 I always indulge at Meddlesome Moth, but then I caught glimpse of this cucumber sandwich by @catherinedownes and I believe I need this in my life. 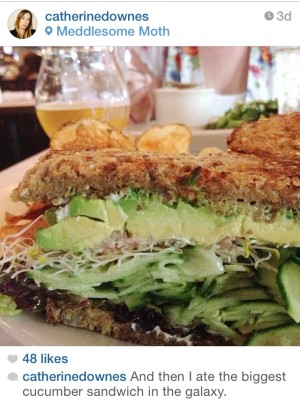 Not only am I sad that I missed out on Dallas Blonde’s second birthday bash at Katy Trail Icehouse, but now I am jealous of the cake @deepellumbrewco cut to enjoy with those goblets of beer. 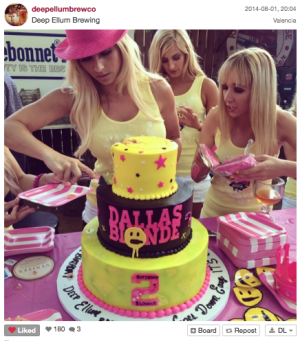