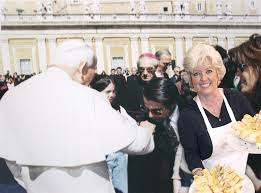 I’ve known Wick Allison, the editor in chief and owner of D Magazine, since 1974AD. He’s an intelligent man in so many ways. However he doesn’t know bupkis about bagels, baba ganoush, or Bordeaux. He is a culinary ignoramus. Wick’s idea of a perfect meal is a tuna sandwich with extra mayonnaise on toast, served with fries. No wonder he’s been satisfied with my food writing for 16 years. It’s the only section in the magazine that is over his head.

Yesterday I wrote a post urging you to help me get SideDish on TV. We (I) have a great opportunity to create as many food-related shows on KTXD — soon to be D-TV — as we (I) can get developed. However, Wick claims he’s not interested and because he isn’t interested, you aren’t. I sent him a link to my post. He didn’t reply directly but he told his assistant to tell me that he “isn’t a foodie” and doesn’t know the first thing about “foodie talent.” 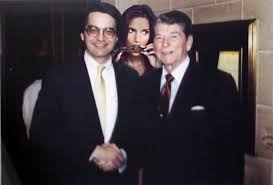 Wick Allison and pre-Top Chef Padma Lakshmi suck on barbecued ribs with President Ronald Reagan. How many people can claim that on their life list?
Jerry Mclure

How could such a entrepreneurial thinker be so brainless about food programming? Food Channel? Food Network? Bobby Flay Eats Dry Toast? Wick would never miss a chance to cash in.

Suspicious, I snuck into Wick’s office last night to search for ammunition. And there between the version of The Bible he edited and the current issue of The American Conservative, I uncovered the mother lode. Tuna sandwich and fries, my sass. Wick is a freakin’ closet foodie, and I found the pictures to prove it. He travels the world and eats and drinks with all of the major players.

What do you say now, Wickster? Fried shrimp with Paula Deen and the Pope? Barbecued ribs with Ronald Reagan and Padma? How long before I find more evidence of your secret epicurean adventures? Give SideDish a show, or I’ll give you one you’ll never live down.