Summer Lessons From The Pool 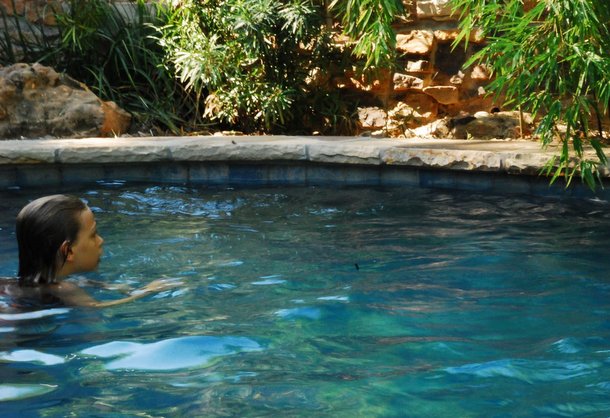 Kids and the swimming pool are hilarious. I love watching them entertain themselves with creative games and ridiculous dares.

Right now three of the of the four boys at our house are jumping from the wall at the end of the pool, stretching every inch of their middle school bodies, trying to reach a limb of the tree that hangs over the pool. A competition to touch a leaf. No one has had success. Except for a 7th grade girl who’s over visiting one of our daughters.

As soon as Claire touched the leaf, as verified by the high-school aged judge, the boys groaned in agony. Then they pulled themselves out of the pool, acting like they had been shot in a spaghetti Western. Hearts grabbed, fake gasping for air, they slowly climb up the short wall then dramatically fall into the water. Pretend dead.

So cute. Although they most certainly would groan at being “cute.”

Seriously, though. Is there anything sweeter than goofy, impromptu giggling?

I relish these moments. I don’t ever want to forget them.

As I’m drinking in the moment, I see something even sweeter.

Our youngest is just learning to swim. I put him in lessons when he was three and four. I also put him in a life jacket every summer. Even this summer (he just turned six). Several weeks ago, he asked if he could swim without it.

I figured it was about time. His strokes aren’t pretty. Okay, so he has no strokes. I said yes. And did what I’ve done on each child – whether it’s climbing age-inappropriate playground equipment or walking into a new school, I held my breath and did my best to watch from a distance. I wanted him to do it on his own. I knew he could. His older brother swam the same way. Despite questionable technique, the kid can make his way across the pool.

He started cautiously. Staying close to the edge. Only in the shallow end. Then he graduated to swimming the pool’s width. Next, he took up “diving.” He holds his hands over his head, leans over (only slightly), then jumps in feet first. It’s hard not to laugh. I only inwardly chuckle. He gets his feelings hurt when he thinks someone is laughing at him. And my, “But you’re so, so cute” doesn’t cut it. I guess I like cute.

Despite his classification as fifth child, his personality much more resembles a quiet and purposeful first child, as far as birth order behavior is concerned. So it has been a slow go on the swimming front. His strokes still don’t exist. But now he can “swim” the length of the pool.

Today he jumped in from the wall. Huge hurdle. I watched his little legs quiver as he stood determined to follow everyone else’s lead, scared to death of the deep end of our pool (vintage 1960’s deep.)

He did it. He jumped. And since he’s a little guy, he buoyed right back to the surface, lickety-split. As his head burst through the water, a smile literally reached from ear to ear. Crazy great.

But that wasn’t all.

Rather than swim to the edge closet to the wall and get out, the kid begins his slow, methodical, make-shift dog paddle to the shallow end. A member of the Dory just-keep-swimming club, he keeps his head above water, never for a moment considering an option to stop.

I watched him. I could see his fatigue. But he kept going. And here’s where I just about busted with emotion.

A dark shadow grew under him. Was it the pool sweep coming close? Was it a snarky middle-schooler coming to scare the daylights out of easy prey? What?

The shadow was his sister, who had apparently been watching him too. She silently swam up underneath him, and gently put him on her back. Another smile replaced his determined grimace as he lightly held on to her shoulders. They both happy-giggled as she moved back and forth like a dolphin carrying him to the edge.

What a beautiful picture of friendship. Because, in addition to being related to each other, they are friends.

I loved what I saw.

Who am I walking alongside in life that needs a lift. A gentle lift. No questioning whether the need exists. Just a thoughtful coming along beside – or in this case under. Because sometimes we need someone to carry our load for us. Even when we’re willing to make it on our own – not complaining or asking for relief.

One who sees and acts without an ask.

I am now an emotional puddle.

Dallas’ most important news stories of the week, delivered to your inbox each Sunday.
Dallas Family Kay Wyma
Advertisement