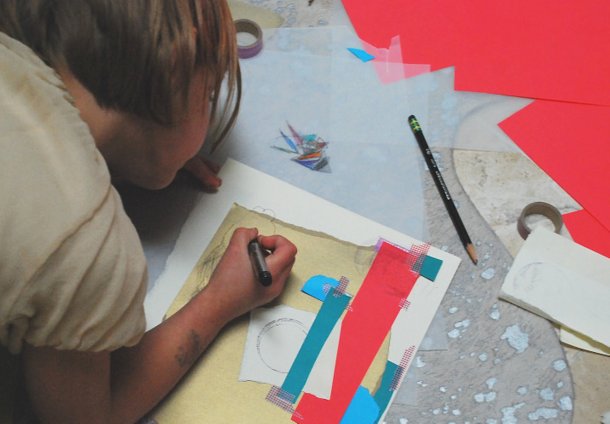 Seriously. Upon opening boxes (or “packages” as Jack so positively saw them) and unearthing long lost (hidden in some closet or under a bed) treasures, I could almost hear Barbara Streisand crooning Memories from the other side of the room. Many “misty, watercolor memories” came back to life as I held tattered projects, yellowed photos, and I’m-so-glad-I-saved-these in my hands.

Some of the stuff we found included:

“Oh… What’s this?” exclaimed one of the kids.
“Wow! Look at all those numbers,” replied a grabbing sibling that had to see for himself.
“It’s a phone book,” I say.
“A what?!!!”
I guess I found someone from the dark ages, too. It wasn’t that long ago!!

One of the most fun things I found was a journal I had kept when on a semester in Paris.

I don’t even remember writing the thing. In fact, I had forgotten almost everything in it. And though I kept repeating things like “it’s so cold” and “I’ve never been so cold in my life” and “I’m freeeeeezing” [sidebar: the nice old widow who took my friend Christy and I in to live with her thought that turning on the gas for heat would kill you. Needless to say, we slept under a literal mountain of blankets, like a cocoon. It helped, but not much. We later realized that she made her room nice and toasty with three space heaters strategically placed by her bed.], and, though my writing had much to be desired, my mind was flooded with wonderful (some sad, most hilarious) memories as I turned each page. And I got to share them with my daughter who endured the reading.

I realized that in the midst of best intentions and true to my procrastinating self, I am missing out each time I don’t take a few moments to treasure what will, in the not so distant future, be memories.

So … even though I purged, I’m going to do my best to put aside and help the kids save a few of the keepsakes to help them remember. Photos, small projects, things that conjure the essence of special, though seemingly mundane, moments. Commemorating times with their grandparents, anything that conveys the laughter and fun and love that surrounds them.

I discovered in those boxes that it’s the little things that mean the most — like, for example, anything with my grandmothers’ hand writing. In one the boxes I found her hand-written cookbook. I’m never letting go of that one. Let’s just say, most of the Crisco-laden recipes will remain in the book. It’s the nothing notes written in the margin that make me smile.

What a reminder to me: write nothing notes. So what if Pumpkin Chocolate Chip Muffins are Jack’s favorites. He would eat a dozen every day. We all know that. But, truth is, we’ll forget.

So here’s to simple posterity. Hand-written is best. And yet another reminder to slow down and to savor the moments.