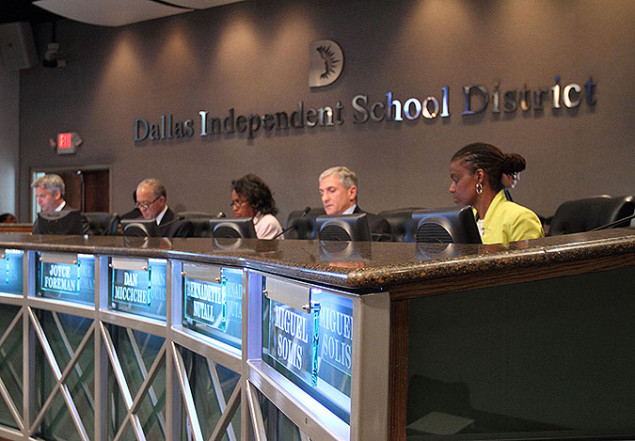 • I’ll have more thoughts next week on yesterday’s board briefing. Among them: A look at why the board can’t wrap its head around a simple, effective financing plan, and how the status-quo crowd doesn’t mind hurting children so long as they damage Mike Miles in the process.

• Hope you saw the report by Steve Pickett at Channel 11 (he’s really good, btw) about how the Miles-Nutall-Dade report is in DISD’s hands, and how Bernadette Nutall says it clears her name. Well, sure. If by “clearing her name” it shows that everyone agrees it’s unclear what happened, that everyone who says Nutall bullied her took back those statements (after Nutall lawyered up, on DISD’s dime), and says all the stuff she claims about Miles isn’t substantiated, either.

• Since we’re on Nutall, I’ve been meaning to bring this up: Did you see the DMN story on the initial success of Imagine 2020, the program Miles put in to add resources to the schools that need them most? Just want to point out that Nutall was against this plan, saying that Miles shouldn’t “experiment on our children.” So you’ve got that example of good board leadership going for you, District 9, which is nice.

• This comment from the last post on Learning Curve I thought was especially good at laying out the problem with folks saying they’re against the policies outlined in the Comprehensive Plan just because they don’t like Miles. (Specifically the school choice aspect). Just wanted to highlight it:

So your view is that the proposal is good policy (I don’t see any criticism of what has been proposed, only of the person making the proposal), but that the anti-Miles folks should vote against good policies so long as Miles is the super? How does that improve the DISD? It sounds like you’re holding the students in the DISD hostage until the trustees give into your demands to fire Miles. How do Miles’ policies impede Montessori of IB? My understanding is that both programs are worked very well where they have been implemented. And Montessori is a very regimented program that does not allow individual teachers to exercise much judgment in the curriculum, so I wouldn’t expect Montessori programs to be very inflexible (from a teacher’s perspective) with or without Miles. I certainly haven’t heard any complaints about Dealey’s or Mata’s Montessori programs or any of the IB programs in the DISD. I really would be interested in hearing about problems that have arisen. Have you heard bad things about Macea? I know the place was close to failing in 2011 because of the Wilmer-Hutchins debacle, but I had heard that the conversion to a tech magnet substantially improved things (i.e. from literally one of the worst schools in the state to better than average). And I think anyone who refuses to even have a discussion about ways to improve the DISD until they have their way about who is or is not in charge has effectively conceded that they no longer care about the overall health of the DISD. If you can’t even stomach saying “that is a good idea” when you agree with a proposal that could improve things because you hate the person who proposed it, you are the problem, not the solution.

Dallas’ most important news stories of the week, delivered to your inbox each Sunday.
Bernadette Nutall School Choice