Enjoy unlimited access to all of our incredible journalism, in print and digital.
Subscribe Now
Advertisement
CRE Opinion

After six quarters of the Dallas office market turning due to the pandemic-induced recession, average asking rates have shown their first significant dip.
By Steve Triolet | October 5, 2021|12:00 pm
Advertisement

A peculiar thing happens to office asking rates when leasing and tour activity seize up, the movement in rental rates pretty much stops moving as well.

Landlords are hesitant to lower asking rates until they feel like they are being eliminated from consideration by tenants out touring the market for space. That’s one of the primary reasons rates are a lagging indicator in comparison to other market statistics like net absorption and vacancy.

Even against the backdrop of a global pandemic and widespread work-from-home measures for all of the office markets across the country, many markets like Dallas-Fort Worth have only seen a muted response on the rental rate front. This is while the other market fundamentals have weakened with higher availability and vacancy increases due to tenant downsizing.

But as many other market experts have touched on in recent articles on the state of the market, the market is beginning to thaw from being frozen over the past year and a half. Tour activity has begun to pick back up again, and with that, rates have begun to move from the increased activity. 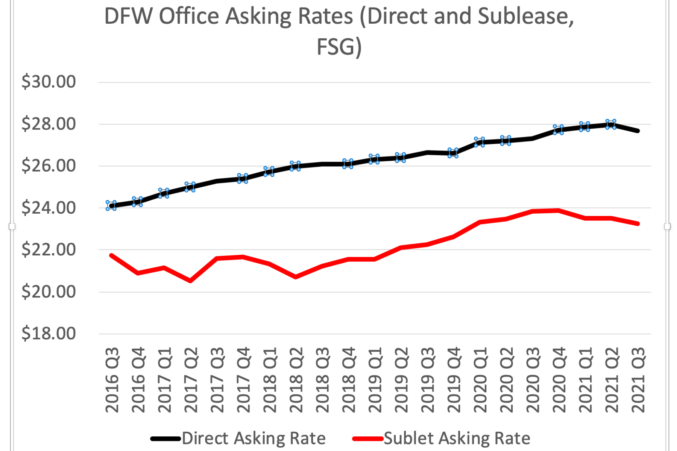 It should be noted that one of the reasons the drop has not been more significant is at the same time that companies are shedding space thru downsizing and subleases, there has been an elevated amount of new Class A construction deliveries. These new office projects delivered over recent quarters have continued to quote top-of-the-market rates (typically in the mid $40 range, as opposed to about the $30 mark for average Class A properties).

Since the beginning of 2020, Class A office deliveries have totaled almost 5 million square feet.

This 5 million square feet of top-end new Class A construction has basically been masking the decrease rates for older Class A and B properties.

Historically, the delta between Class A and Class B properties has been about $5 dollars per square foot.  Currently, that number has widened to almost $9 per square foot. 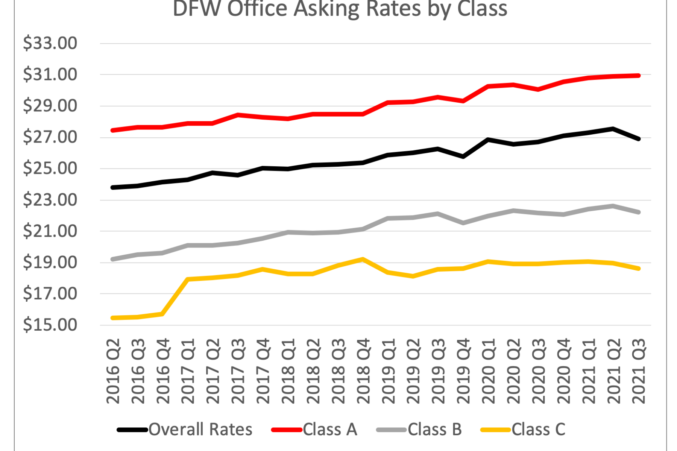 Each property Class has its own dynamics, with Class A properties skewed the most, largely due to new construction deliveries. Still, the problem with averages, in general, is the wide variance individual properties can have from the norm.

Even for Class B office properties, it is not uncommon for there to be a 40 percent variant either above or below the market average. This is typically due to submarket dynamics, the age of the property, and the property’s amenities.

It would be remiss if the near record-high amount of sublease space was not mentioned and its impact on average rates.

In the past, one could make the argument that sublease space was an outlier, but with the sublease availability being made up of spaces of all shapes and sizes, some with short term lefts and others with 10 years or more left, tenants looking for space have lots of viable options right now.

These sublease rates certainly put downward pressure on rates. It is hard, however, to peg the exact discount beyond the 25 percent rate reduction because a high percentage doesn’t quote asking rates.

The irony about asking rates is that even though they are one of the more complicated market measures to make sense of, they are one of, if not, the most important component to both tenants and landlords.

As the market changes and companies refigure their size footprints, look for further significant movement ahead on rates.

Every cycle is different, but with the past as a guide, we should see somewhere between a 7 to 15 percent drop in rates as the market adjusts to current market dynamics.

Steve Triolet is a research professional for Younger Partners.

Steve Lieberman: Why Retail is the Great Unifier

The role of the store will remain central to the shopping experience, the building of brands, consultation, and social interaction, writes The Retail Connection’s CEO.
By Steve Lieberman
Commercial Real Estate

Newmark leader Garrison Efird says plans are already in place at many companies for re-entry by Labor Day.
By Garrison Efird
CRE Opinion

Succeeding in Business in the Long Term: Weathering Booms, Bubbles, and Busts