The first time I went inside Reunion Tower, it was for drinks after a journalism conference more than a decade ago. While it was an adjustment, and I was somewhat off-kilter as we spun around the room some 561 feet above the ground, I felt incredibly posh.

Erected in 1978 by The Beck Group, Reunion Tower was the brainchild of an ambitious city manager named George Schrader, John Scovell (the then president and CEO of Woodbine Development Corp.), and a very young oil executive named Ray L. Hunt.

I still remember the first time I drove into downtown Dallas after moving here from Los Angeles in 2001. That sparkly ball in the sky took my breath away—and still does. But it wasn’t until I became the real estate editor at D CEO that I actually learned about the project and its developers.

Last night, Hunt (along with Provident Realty founder Leon Backes) were inducted into the NTCAR Hall of Fame. And in true Ray L. Hunt fashion, the prominent real estate and oil developer shared with the audience a few things they probably did not know about the development of Reunion Tower.

No One Wanted the Site

HUNT: “The year was 1972, just short of the Ice Age. And the original portion of our land at Reunion, approximately 20 acres, had been shopped all over the city of Dallas before we even became aware of it. But no one had the slightest bit of interest in buying the land because the property lines associated with those 20 acres made the land virtually impossible to develop. When we will look at that situation, however, our logic was a little bit different.”

People Thought They Were Crazy

HUNT: “The land had gone through a bankruptcy, and it was being offered for roughly $3 per square foot with 10 percent down payment and a 20-year non-recourse note and extremely favorable terms. So we calculated what the basis of the land would be if we bought those 20 acres, paid the 10 percent down, held up for 20 years, and absolutely nothing occurred around it.

“The answer was that in 20 years, our basis would have increased to something like $5.50. We then said ourselves, ‘what are the odds of land in downtown Dallas being worth more than $5.50 per square foot 20 years from now?’ Our logic was really that simple. But when people learned that we had actually bought the land, they thought would have lost their minds.” 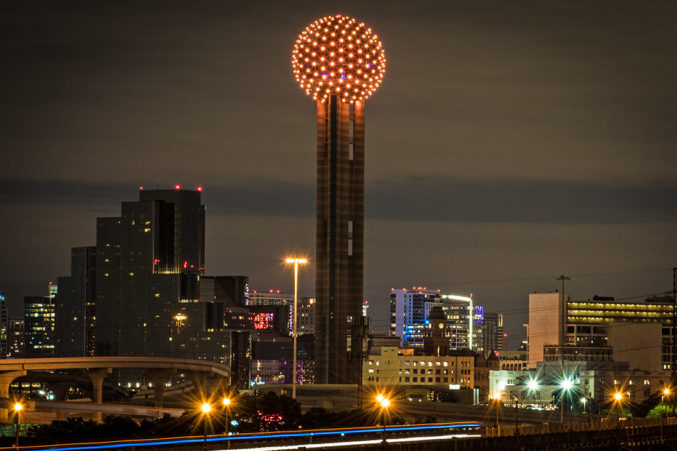 How They Ended Up With 10 Extra Acres

HUNT: “Several years later, the city of Dallas purchased the then abandoned Union Terminal Building to serve as Dallas’ future Regional Transportation Center. However, along with the building, just by happenstance came approximately 30 acres of land that had been used as a rail yard. That land, like our land, was virtually impossible to develop. It’s a long story, but several years later, we went to the city and volunteered that we would fund 100 percent of the cost of the land planning team to evaluate the entire 60 acres—the city’s land and our land.

“With the land planning team being instructed to ignore the property lines, we agreed that if both the city and ourselves liked the land plan, we would then sit down and see if we could negotiate a transaction that would make it happen. And that’s exactly what occurred.”

How They Almost Built the World’s Largest Whistle

HUNT: “Probably the most memorable event, which was not funny at the time, occurred and just before physical construction was to commence with the tower. The ball on top of reunion tower, if you envision that, actually sits on top of what amounts to four separate 50-story, vertical concrete cylinders. A question that occurred to us just before physical construction was to begin: Whether if certain high-velocity wind events occur, were we about to build the world’s largest whistle. That would create an extremely loud noise that would be heard for miles? We laugh now, but that question was very real and very troublesome at that moment in time.

“We immediately stopped our plans for construction, built a small-scale model of reunion tower, and tested it in a wind tunnel. Fortunately, Reunion Tower did not become the world’s largest whistle. And the rest is history.”

HUNT: “The Hyatt Regency and reunion tower will soon be going through a post COVID repositioning.”