The long-awaited $155 million redevelopment of the 70-year-old Weir’s Furniture store is expected to deliver on time this November. Since announcing the project in 2019, Weir’s Plaza has been a catalyst for transforming what was once an old-timey commercial strip within the Knox/Henderson District into a premier shopping destination with a brand new name. Big leases such as the 70,000-square-foot RH Dallas have since opened in the Knox Street District, emphasizing a trendier and more luxe feel to the Highland Park adjacent neighborhood. 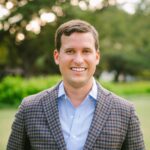 Partnering with the Weir’s family, Four Rivers Capital is redeveloping the site the family has owned for the past 70 years.

Weir’s Furniture will return, occupying 28,000 square feet on the first two floors of the building along Travis Street. About 12,000 additional square feet of space on Knox Street will serve as dining space from a popular, but unnamed local restaurant group, Schoelkopf said.

“We tried to focus as much as possible on local operators and pairing them with a local project,” Schoellkopf said. “Someone that understands what this street is, the significance and history of the form Highland Park Soda Fountain building, and someone who will weave that into what we are delivering.”

Schoellkopf said he hopes to be able to announce the restaurant leases toward the end of summer. 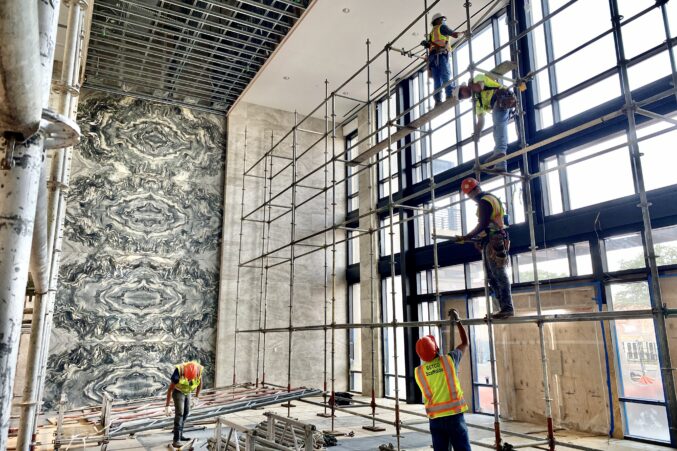 Workers finish out the lobby of the soon to be opened Weir’s Plaza in the Knox District.

In March 2020, we told you about a documentary the developers were filming about the project. (You can click here to read the article and watch the first video delivered in the series). The documentary starts with the background on how Weir’s furniture store came to a neighborhood that was once considered the Appliance Captial of the World–spoiler alert: it took several pushes for a hesitant J. Ray Weir to open the store.

In the second part, the story walks viewers through the first day that concrete was poured at the job site and shares details about how they and designers GFF implemented the 110-year-old Highland Park Soda Fountain walls into the rebuild. “It’s really cool to see that 2,000 square feet is turning into a 300,000-square-foot project with six floors of subterranean parking,” Schoellkopf said.

A highlight of the preservation is the reopening of bay windows that were filled in with brick back in the 1960s. “We’ve lasered every brick, we’ve numbered every brick, so we’ll be able to totally recreate the original building back like it was in 1910,” Schoellkopf said. Brick from the old eatery will be weaved into the redevelopment’s design, and memorabilia from the restaurant (like the old cash register) will be incorporated into a yet-to-be-announced restaurant.

The reason behind the documentary, Schoellkopf says, is simple: “It is really just to give everyone an inside look at the process. Our desire is to celebrate this historically driven project, the history of the Highland Park Soda Fountain building, the Weir’s legacy on the street in the district. It is simply that.”

The third part of the documentary will release at the end of the year.