Earlier this year, I wrote about the micro-level of place, which for architects and interior designers who focus on corporate design, is workplace and the immediate environs that support it.  Now, I want to zoom out to the macro level, perhaps in a space that is much more comfortable to me personally as an architect. 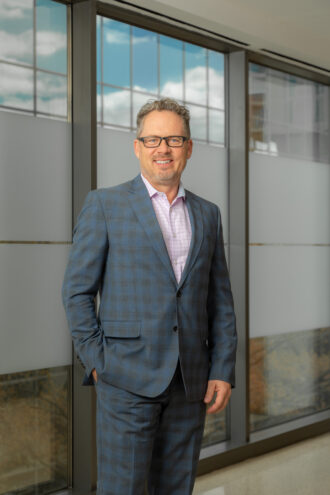 Placemaking relates to a broad spectrum of environments. The desire to create new destinations is inspired perhaps by the organic development of grand and memorable locations that are indelible to our minds. Examples might be the Sydney Harbor, the Champs-Élysées, or Times Square.

Recently, while working on a new urbanist neighborhood in Denver, my team and I reminded ourselves about the magic of places like Venice, Italy, the Greek island of Santorini, or Savannah, Georgia to name a few. Again, those places were shaped by many factors over many years and evolved organically, yet with a spirit so strong that they have become the epitome of a place people will circle the globe to visit or live in.

Architects share a responsibility with urban planners and, in fact, the whole universe of development contributors to focus on a process of shaping the built environment in maybe not so magical and organic a manner as the examples listed above.

The challenge therein becomes balancing broader goals of placemaking with the specifics of maybe a singular site and the real-world factors of putting together real estate deals. Who could have predicted the immense value of Klyde Warren Park or the Katy Trail in defining the ethos of Dallas?

The real estate values of the properties that line the Katy Trail have soared and the connectivity that Klyde Warren Park created between the Dallas Central Business District and Uptown has ignited the energy levels around those areas to define a true heart for Dallas. Notice the obvious though: the making of those places did not occur through traditional development. That is to say, all the positive economic impact on the real estate around those character-rich environments is because of what they enhance in relationship to living one’s life – places that do not generate even one dollar save for the generous giving of their supporters.

It does not matter if you are designing an office building in urban Dallas or a boutique hotel in the Ozarks, the experience of place will be shaped by the poetic narrative that a dedicated design team will use to tell a story

Other noted examples in North Texas built on revenue-generating spaces are Sundance Square in Fort Worth and more fabricated places such as Southlake Town Square, Legacy West, or Watters Creek in Allen. Those have the ingredient of the overused term “mixed-use” in common, but by the inclusion of the characteristics of live, work, play, and even perhaps learning, weave the spirit of placemaking together with varying degrees of success.

And speaking of learning, perhaps it is worthy of providing the context and the core reason I am attracted to placemaking and my own genesis of finding place. I was raised in Dallas (North Dallas specifically) in the 70s and early 80s and moved to Austin for my architectural studies. It was there on the classically planned campus of the University of Texas at Austin where I first understood the magic of place and the influence it can have on people. Couple that with the Austin scene anchored by the State Capitol building, Ladybird Lake (Town Lake in my day), and Zilker Park, and one might understand the immense influence and the aura strong placemaking has on one’s wellbeing.

Fabricating places from a blank canvas through intentional decision-making is quite challenging, and often the results are plastic or vanilla. I am not sure how many more “town centers” that DFW can handle. Curating the ingredients of these mixed-use environments is a voodoo art at best. On the flip side of the themed and fabricated is the renaissance of real neighborhoods within DFW. Dallas, which I know better than others, has benefited from older neighborhoods like Bishop Arts, the Cedars, Deep Ellum, and Knox Henderson doubling down on bringing holistic living to those areas.

Even our own Central Business District has more residents than ever and a new pumping heart of energy in the AT&T Discovery District. It may seem counter-intuitive, but a well-crafted open space with the right vibe creates new and sustained energy where people want to just be.

While Klyde Warren Park brought a vibrant connection to Uptown, the potential removal of the brutal overhead Interstate 345 on the other side of Downtown could make the urban core and places like the Farmers Market and East Quarter more connected to Deep Ellum, Fair Park, and beyond.

Placemaking has many ingredients. Walkability has become vital to towns and cities in the U.S. and indeed everywhere in the world. Authenticity and being genuine only serve to enhance, and Texas has a regional pride that is exemplified in our placemaking from the music halls and the courtyard squares of our smaller towns to the epic and romantic qualities of the San Antonio Riverwalk or the Stockyards District in Fort Worth.

The rich and varied tapestry of place can be found in the myriad of decisions that designers make from scale of every physical piece of structure, solar orientation, and material decisions that range from high contrasting variety to a connected similarity from simplified and elegant palettes. 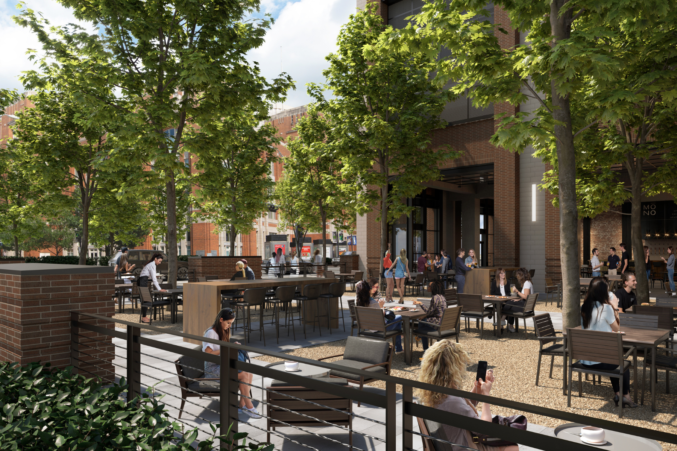 Just as I used images of our latest urban office project, Victory Commons One, to support the notion of an evolving workplace, the spirit of that place will perhaps be best anchored by the new one-acre park at its lobby doorstep —or if we are really lucky, the bracketing of the park on the south end and the purposefully planned Biergarten on the north end of the retail base. Often we describe the outdoor spaces leading to our built edifices as “the space between.” Another common thread to all of the examples given here is the fabric of the outdoors, the planting, hardscapes, lighting, and even wayfinding and branding of place.

By now, you may note that the observations I have made are more practical than profound – a desire to bring more awareness of the challenge of curating a designed environment over those that grow organically. I believe that we are inspired by the gravitas of great places, but what is the quintessence?

I believe that the quintessence of place is the experiences it imbues in one willing to take it in. That can come in the mundane nature of where one might work all the way to the fantastical escape we take on a once-in-a-lifetime vacation. Great experiences are that simple but extremely hard to achieve. The experiences become indelible in our minds, and we naturally want to repeat those positive feelings over and over.

It does not matter if you are designing an office building in urban Dallas or a boutique hotel in the Ozarks, the experience of place will be shaped by the poetic narrative that a dedicated design team will use to tell a story – a story that will invoke memorable experiences and bring people to return to that place again and again.

More than ever, as we evolve into an image-based society overrun by social media, the power of placemaking will be captured in our experiences and held closely in our memories. We can only hope the tactile and the tangible will outlive the Instagram posts and Snapchat stories and we will all lower our camera lens to drink it in with our very own eyes.

Andrew Bennett is a partner and design principal at Dallas-based BOKA Powell Architects.