When AT&T made the arguably bold decision to keep its headquarters in downtown Dallas, stakeholders quickly began discussing expanding and renovating its home to create a destination for not only employees but the public. Those early talks evolved into what is now the $100 million Discovery District.

Architects at Gensler’s Dallas office had no frame of reference for creating such a space. Sure, they benchmarked hundreds of cool campuses around the country—none of which were open to the public. But AT&T wanted something that had never been done before. 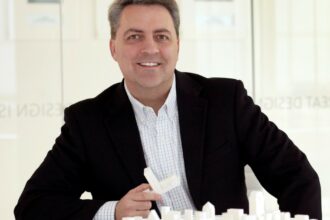 “There are no other corporate campuses in urban environments like this that brings in the public so openly,” Barry Hand, a principal at Gensler who oversaw the project, told DCEO.

When concept studies began, Gensler was looking at a 16-block area for the potential district in the southern core of downtown—a neighborhood some real estate analysts warned against. Over time, plans narrowed, and a quad of blocks between Commerce, Wood, Browder, and Field streets became the focus of the campus. 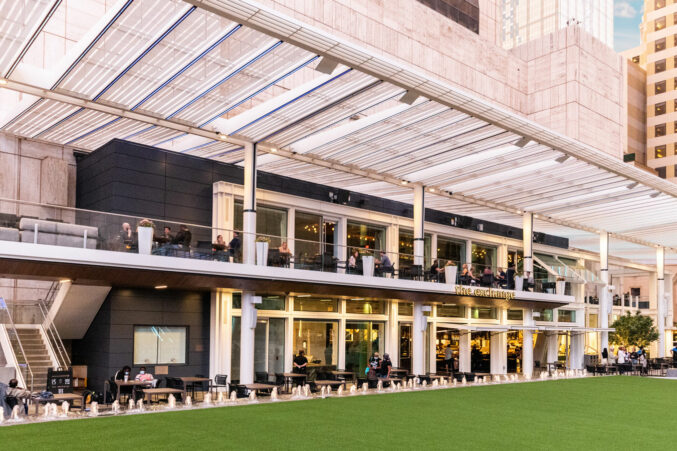 Although there has not been an official grand reveal of the development—it has been delayed due to COVID restrictions—the district is now fully open. Over the past 18 months, more than 10,000 square feet of food and beverage space was introduced, with Jaxon Beer Garden and a food hall called The Exchange that hosts 16 eateries on the first floor (such as Revolver Taco, Rise and Thyme, and Bobbers) and a few sit-down options on the second floor (Ounce, Ichi Ni San, and Hard Shake, which have been open to the public since early 2021.) Hospitality Alliance manages the project. 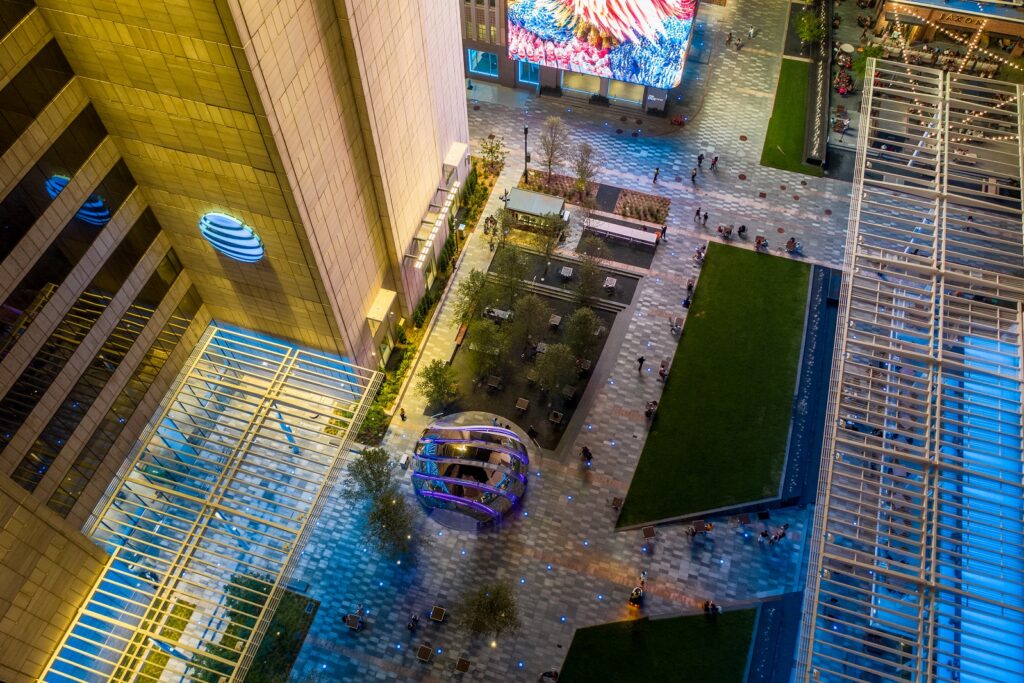 The district has quickly become a popular destination with extravagant visual elements—attracting about 100,0000 visitors each month. It showcases a colorful light and sound display, creating takeover moments that include trellis LED lights, a 30-foot tall rendition of the company’s globe logo that rotates 180 degrees and lights up like a rainbow, and a 104-foot-tall 6K media wall. Some are already calling it Dallas’ version of Times Square.

“There are certainly bold media canvases that are impressive and unrivaled. What you cannot see, however, is the complex integration and the infrastructure that is connecting all the different platforms.”

“One of the things that is possibly most impressive from a technical perspective about the district is really what you cannot actually see,” Hand said. “There are certainly bold media canvases that are impressive and unrivaled. What you cannot see, however, is the complex integration and the infrastructure that is connecting all the different platforms.”

Justin Rankin, Gensler’s Digital Experience Design Studio Director, broke down some of the technology behind how it all works. On either side of the plaza, you will see architectural trellises. Their purpose is to create a ceiling in the outdoor space. 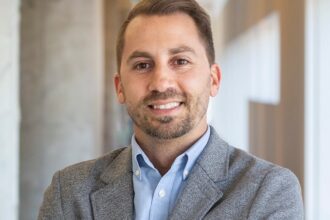 “They are also media components that choreograph with the in-ground lighting elements and respond to the content on the media wall,” Rankin told D CEO. “Together, the trellises are very important parts of connecting the overall experience. The technical infrastructure of the district connects the multiple media platforms to a robust content management system that can deliver content and experiences to them simultaneously or one-to-one, 24 hours a day. The ability to do that, and to send the volume of content and data that makes up the run of the show to over 100 million pixels, in real-time, every minute of the day, is a feat. The technical infrastructure is one of those things you can’t see but must appreciate, given it’s what makes the whole experience possible.

“And really, outside of theme parks, there aren’t many places in the United States that have this complex of a digital ecosystem,” Rankin added, “especially one that’s this open to the public with free admission.” 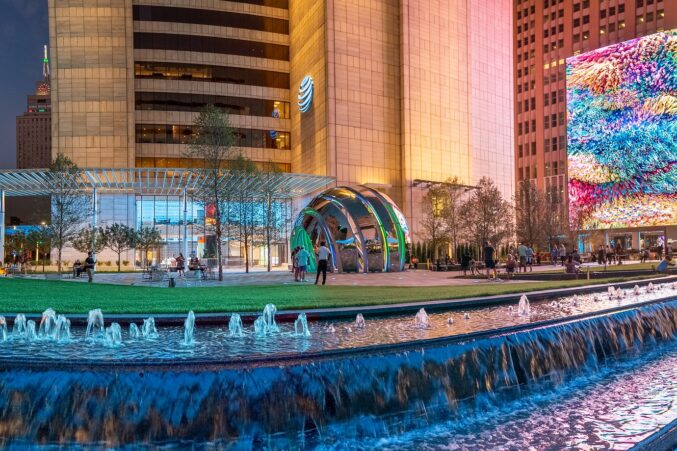 From the start, AT&T wanted the Gensler team to figure out how they could design it in a way that would allow the company to move, shift, and adapt the space day to day, week to week, and year to year, to maximize its use.

“We can strategically do that with the platforms we designed, whether it’s rotating the globe in certain directions to activate specific areas of the plaza, individually activating one of the platforms by itself, or fully taking over all the digital platforms at once to create a fully immersive show,” Rankin said.

Hand said there was a healthy level of daily stresses, discovery, and real-time problem-solving regarding a design process that blended innovation and leading-edge custom technologies with an accelerated schedule. The project team traveled the world to tour various campuses, fabricators, and settings. There were many trips to England to view the fabrication of the Globe sculpture and resolve the many details and finish techniques required to achieve the intended outcome.

Dozens of consultant teams collaborated on the endeavor. AT&T built a staff that spread out into areas between the district’s operations to manage the content on the digital platforms. Finally, the construction team assembled hundreds of trades, including dozens of people who were based on site for more than two years. Another challenge: Construction took place amidst the ongoing functions of thousands of AT&T employees on and around the site.

“Corporate headquarters are often sterile office environments that are successful in expressing a brand, but short on walkable, human scale placemaking in an urban neighborhood.”

“Although the AT&T Discovery District was built primarily for the 6,000 employees on-site, it is important in establishing a bold new standard for the amenitized corporate campus in a neighborhood setting,” Hand said. “Corporate headquarters are often sterile office environments that are successful in expressing a brand, but short on walkable, human-scale placemaking in an urban neighborhood.”

Great public urban places must be sustainable or durable through various times, and they must also deliver certain human experiences and events, Hand said. If you think of Times Square, there is a perimeter of that outdoor room to contain the energy, and then there is something happening in different places that pull people in and ultimately draw them back.

“So, it’s not just about going to a restaurant and sitting outside; there needs to be something to observe, there needs to be something to experience,” he said. “North to south from Commerce down through the project, it is very much a pedestrian street on which you can stroll, play, or simply relax. It is also a place where one can engage with the local neighbors that see it very much as their third place where one can see and be seen.”

As one arrives and progresses through the project from Commerce, the plaza transitions from a somewhat formal and professional environment, which is appropriate for greeting business service customers into the world headquarters of AT&T. As you move your way south into the plaza and then into the beer garden, the experience, details, and finishes grow increasingly casual.

“This, too, is somewhat unique,” Hand said. “There are very few, if any, world headquarters corporate campus settings in an urban environment like this.”

AT&T’s bet on downtown Dallas also has proved to be a good call. Erin Scarborough, senior vice president of planning and administration with AT&T, says she is optimistic about creating more than 500 new jobs for the city of Dallas, between the restaurants and other concepts opening within the district.

“Despite the lockdowns caused by the pandemic, you can already see the popularity and the positive effects, not just culturally, but from a real estate perspective,” Hand said. “You can see investments in adjacent residential, hotel, and office development. On many of their websites, you will see verbiage like ‘located a block and a half from the Discovery District.’ It has had an important effect on that part of downtown. Once we do truly emerge from the pandemic and return to full human connections, the results will be that much more recognizable.”