Younger Partners Research Director Steve Triolet says tenants have a new motto: Out with the old and in with the new.
By  Steve Triolet | May 7, 2021|3:00 pm
Advertisement

One thing that doesn’t get talked about in Dallas-Fort Worth is how much space we have available. Yes, the record amount of sublease space (9.5 million as of April 2021) is not exactly a secret, but what about the other 60 million and change of direct space, most of which is older second-generation space. 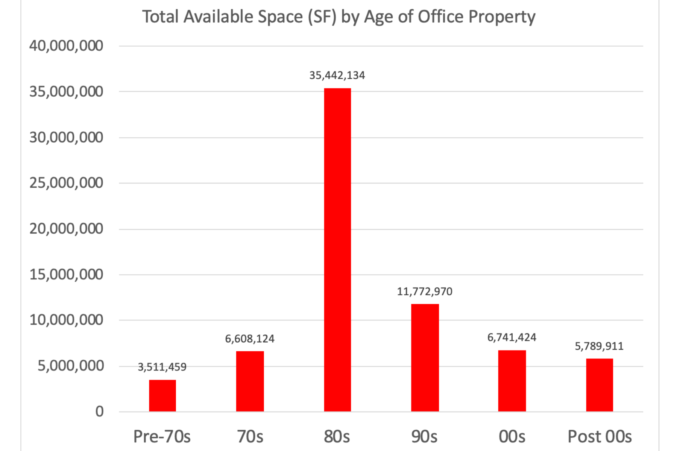 Two areas of DFW – and what some of that space looks like – deserve some attention. First up is the Central Business District (CBD) and its biggest blocks of space.

There are currently seven downtown Dallas skyscrapers with at least 500,000 square feet or more of space available in each: Renaissance Tower, 1700 Pacific, Bank of America Plaza, Bryan Tower, Comerica Bank Tower, Fountain Place, and Energy Plaza. Most of these properties are 80s vintage (40 years old on average), with inadequate parking ratios (half or less than the standard parking of 3 per 1,000 parking ratio), and the lower levels (where most of the vacancy is concentrated) have poor to no views.

These seven properties have more than 5 million square feet of space currently available for lease in aggregate. Time has shown that there is little to no demand for this type of space. After all, the space in these seven buildings has been vacant on average for more than 12 years. It’s fair to say that in many of these cases, these properties are largely functionally obsolete.

Now, let’s contrast the CBD with another prominent area of DFW: the Upper Tollway area. It is a very popular office submarket that boasts its great amenities and is generally referred to as the Legacy area. It became the darling of the DFW a few years ago with the relocation and expansion of several large corporate users (most notably Toyota, JP Morgan Chase, and Liberty Mutual). Even in this area, you have several very large, very empty office properties. Here’s a look at a few of them.

Typically, the large blocks of space in the Legacy area are a good 10 years—or more—newer and have far more adequate parking than their skyscraper counterparts in the Dallas CBD. They also face much more competition from the recently constructed competition and an abundance of potential built-to-suit projects, which is the preferred office product for most large corporate users looking for 200,000 square feet or more of space. These large 90s-vintage campuses were originally built as single-tenant large corporate users and generally are not well suited to be broken up for several smaller office tenants.

The key takeaway is DFW has no shortage of space, mainly because more than 100 million square feet of office product was built in the 1980s, and 35 percent of which is currently vacant or available to lease. As the workforce has pushed north, so too has the preference for the suburban submarkets along the North Dallas Tollway and Central Expressway.

There is also a marked appetite for newer vintage properties with much more modern finish-outs and amenities. Because of changes in corporate preferences for layouts and locations, much of the existing vacant stock is functionally obsolete, which gives DFW one of the highest vacancy rates in the country.

All this is evidence by our continued office construction pipeline, which as of April of 2021 consisted of 32 separate office projects over 15,000 square feet that totals 6.3 million square feet of space.

More than half of that construction pipeline is large corporate built-to-suit projects. In many cases, they are phase 2 from recently completed projects like JP Morgan Chase, Uber, and Charles Schwab. They’re also made up of in-process relocations like PGA and Reata Pharmaceuticals that could have backfilled existing space but opted for more expensive new products over older existing stock.