What’s The Real Story With Sublease Activity in Dallas?

Yes, there is a glut of sublease space, but Collier's Leasing Group executive Sara Terry says the story is a lot more nuanced than total square footage.
By Sara Terry | April 8, 2021|11:00 am
Advertisement

There has been a lot of negative talk about Dallas’ glut of sublease space over the past several months. And yes, DFW has hit a new high watermark for availability if you are only looking at total square feet available. But the real story is a lot more nuanced than that, and two main factors contribute to the market perception: Sublease stats and leasing activity.

On the flip side, there are only ten blocks of sublease space that are more than 100,000 square feet, and those ten availabilities make up nearly 2 million square feet or roughly one-third of the total available sublease space. And several of those sublease listings are pretty tired or have been on the market since well before COVID—Or both.

If you look at the numbers by submarket, the submarkets that are likely to be feeling the most pressure from the Covid sublease influx are the Upper and Lower Tollway and Las Colinas submarkets, which collectively make up nearly 60 percent of all new sublease listings in the past 12 months, for a total of 2.4 million square feet. On the other hand, CBD has only accounted for 368,000 square feet of new sublease listings in the past 12 months, with Uber’s sublease at The Epic being the most significant at 115,000 square feet. 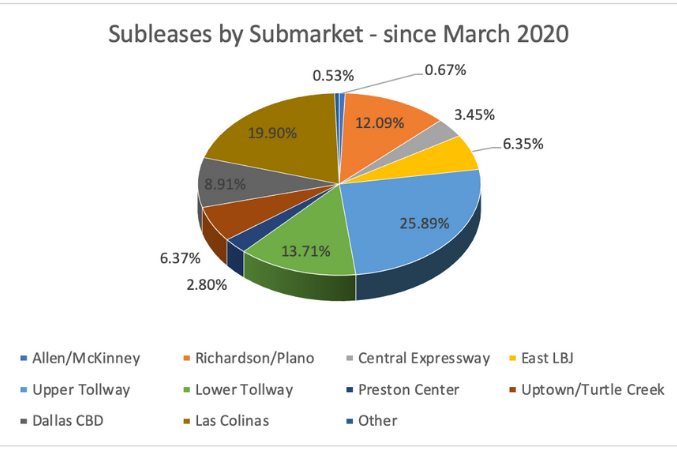 After 10-plus years of the longest bull market Dallas commercial real estate has ever seen, the abrupt stop in leasing activity last March was shocking. Deals that were already in motion came to a complete standstill, and the pipeline of new deals dried up. When deal activity finally started picking back up last summer, it primarily seemed to be fast-moving small to mid-sized deals (under 15,000 square feet), seeking move-in-ready options because the disruption of the pandemic had delayed their process, and they were running out of time.

The big deal pipeline is not as robust as early 2020, which means the main source of lease activity is related to those small and mid-sized deals with local decision-makers. In fact, many of the large deals in the market last March chose to do short-term lease extensions for one to two years, further disrupting the pipeline of big deal activity and skewing our perception of market activity to subleases.

It is important to keep in mind that we will always have a static sublease vacancy. Historically speaking, that number has averaged around 4.0 million square feet for the past several years, which only makes up around 1 percent of the total DFW market. Big deal activity is picking back up again and is likely to gain momentum as we approach summer, which will likely take some of the attention away from the sublease market activity.

With nearly 900,000 square feet of subleases expiring in the next 12 months and some of the higher quality, long-term subleases getting scooped up, we should see the market correct itself back toward the average sublease availability over the next several months.