Yokohama Tire Corporation will expand its distribution network in the U.S. at Intermodal III Industrial Park. Duke Realty Corporation’s Dallas office secured a long-term lease for the company for the 431,630-square-foot facility in Wilmer, about 15 miles southeast of Dallas. This will be Yokohama’s fourth location centrally located to meet its customers’ needs in the Southwest.

Yokohama Tire is expected to begin occupying the space this summer. It will first be used to distribute Yokohama’s OE tires, followed by passenger car/light truck and commercial truck/bus products in 2022.

Nathan Lawrence, Kacy Jones, and Krista Raymond with CBRE and Matt Hyman handled the negotiations on behalf of Duke Realty.

Gulf Relay, a fast-growing full-service third-party logistics provider (3PL), has signed a lease for an additional 350,150 square-foot space located at Crossroads Trade Center 1 in South Dallas. Currently operating out of Coppell and based out of Clinton, Mississippi., the move significantly expands its Dallas footprint bringing its total network in DFW to 460,000 square feet and its U.S. network to 700,000-plus square feet. Colliers’ industrial team led by Ward Richmond, along with James Ewing, represented the tenant. Cushman & Wakefield team members Kurt Griffin and Nathan Orbin represented the landlord. Clarion Partners team members Jack Stamets and Andy Lowe were also involved in the transaction. 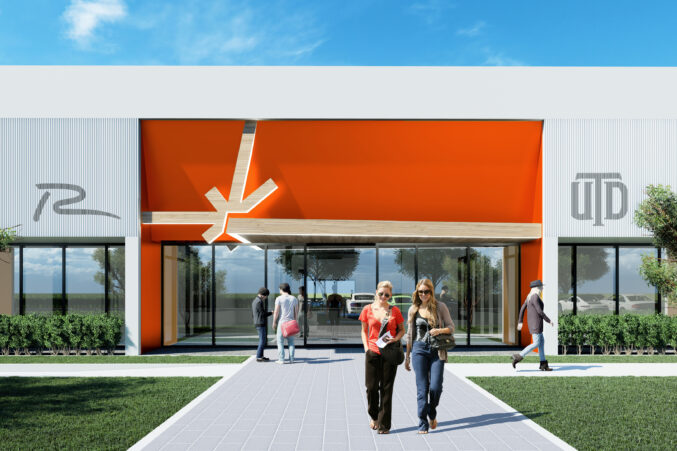 The City of Richardson will establish a significant physical presence in the Richardson Innovation Quarter by moving its Office of Strategic Initiatives into a revitalized, modernized building located in the heart of The IQ at 1302 E. Collins Boulevard. Joining the City will be The University of Texas at Dallas (UT Dallas), which will place five newly created UT Dallas research centers plus an extension of the university’s Venture Development Center. Construction work will commence this summer, with an opening slated for February 2022. UT Dallas will occupy approximately 10,000 square feet of the 27,500-square-foot facility, and 3,000 square feet will be dedicated for programs, networking, and event space that will attract entrepreneurial and startup activity to the area’s thriving tech business ecosystem. The remainder will be occupied by the City’s Office of Strategic Initiatives, coordinating with partners to promote Richardson’s 1,200-acre innovation district. Approximately 7,000 square feet will be set aside for future expansion or flexible partnering opportunities. The City-owned building also adjoins the district’s newly extended Duck Creek Trail.

Summit Financial Group, Inc. has leased 7,764 square feet of top-floor office space at Two Lincoln Centre in Dallas. The 19th-floor space at 5420 Lyndon B. Johnson Freeway will serve as the company’s global headquarters. Nick Lee of NAI Robert Lynn represented the tenant in the deal.

A franchisee for Knockout Sports Bar has purchased a 7,725-square-foot freestanding restaurant building on approximately 2.14 acres at 1640 S. Stemmons Freeway (IH-35E) in Lewisville. David Zoller and Corbin Tanenbaum with Weitzman handled negotiations for the seller.

Del Rancho has leased 6,050 square feet at 1480 W Buckingham Road in Garland. Mai Nguyen of RESOLUT RE represented the tenant. Cameron Mai and Scott Smith of Weitzman represented the landlord.

Worth the Pour has leased a 3,000-square-foot upscale liquor store at The Realm at Castle Hills in Lewisville. Worth the Pour is a new brand created by Michael Reyes, who co-created and recently sold the successful Kindred Spirits & Wine on Inwood in Dallas. Bright Realty brokered the lease.

Permits have been filed to build a 5-story, 200,000 sqaure foot multifamily housing complex called West Broadway Multifamily at 218 West Broadway in Fort Worth. Construction on the $35 million project is set to begin in June 2021 and wrap in June 2023. Architecture Demarest will lead design.

Permits have been filed for Phase 2 of the Wolff Grand Prairie. Phase 2 will add 411,596 square feet across 362 apartments and seven buildings. Construction on the $36.3 million project is set to begin in May 2021 and end in May 2023. HP Architecture and Urban Design will lead design on the project.

Northmark Commerce Center have filed permits to build a 232,000 square foot industrial warehouse on Old Denton Road Northeast of Beach St. in Haltom City. Construction on the $12.5 million project is set to begin in July 2021 and end in June 2022. LGE Design Group will lead design.

Permits have been field to build 1 Risinger Bldg. 1, a 178,880 square foot warehouse facility at Harmon and Golden Triangle in Dallas. Construction on the $10.5 million project began in March 2021 and will end in December. Alliance Architects Inc. will lead design.

Safe Storage has filed permits to build a 148,000 square foot storage and office building at N. FM 1138 in Nevada. Construction on the $5 million project will begin in June and end in December 2021. No 10 Design Group will lead design.

Permits have been filed to build a 67,677 square foot, the 3-story medical center called Trinity Sachse Medical Plaza at 4650 President George Bush Freeway in Sachse. Construction on the $9 million project will begin in June 2021 and end in July 2022. GHC Architects will lead the design.

HomeZone has filed permits to build a 40,149 square foot store at the intersection of NW 820 and Royalty Lane in Fort Worth. Construction on the $2.1 million store will begin in June 2021 and end in January 2022. Johnson Architects, Inc. will lead design.

Permits have been filed to build a 20,500 square foot, two-tenant office building at 1717 Walnut Hill Ln. in Irving. Construction on the Keyless Co. Office Building will begin in June 2021 and end in February 2022. NCA Partners will lead design.

AllTrades has filed permits to build a 19,000 square foot multi-tenant office building at 2828 I-30 in Mesquite. GPD Group will lead design on the $1.7 million project. Construction will begin in April and end in January 2022.

Eddie V’s Prime Seafood has filed permits to build an 11,524 square-foot restaurant at the corner of SWC HWY 121 and Preston Road in Plano. Construction on the $1.5 million project is set to begin in August 2021 and end in April 2022. DPA Architects will lead design.

Shammy’s Car Wash has filed permits to build a 3,812 square foot car wash station at US 287 and Avondale Haslet Rd in Fort Worth. Construction on the $3 million project will begin in October 2021 and end in June 2022. A Plus Design Group will lead design.