In a joint venture partnership, Dallas-based Pillar Commercial and Oklahoma investor Hall Capital have acquired the 120,170 square foot office building, One Bethany East in Allen. Pillar Commercial plans to relocate its Preston Center headquarters to the site in the second quarter.

One Bethany East was built by Kaizen Development Partners and is home to many high-profile tenants, including the Credit Union of Texas, Boss Fight, and the Allen Economic Development Corporation.

Pillar Commercial completed the acquisition through Pillar Real Estate Fund I (PREF I), a fully-discretionary investment vehicle focused on office and industrial properties throughout the state of Texas.  One Bethany East is the fund’s fourth investment.

Legacy / Collier Residential is building a 600,000 square foot, $42.5 million multifamily housing development called Galatyn Park Station at 2323 Plaza Blvd in Richardson. Construction on the development, designed by WDG Architecture, begins in May and is expected to be completed by May 2023.

A 221,355 square foot development, called Hardrock Development, is being built at 975 W. Oakdale Road in Grand Prairie. The $8 million project is designed by azimuth architecture, and construction will go on till March 2022.

The Pier 1 tower located at 100 Energy Way has sold. The City of Fort Worth to occupy the vacant space, relocating the City Hall in 2022. The cost of purchasing and renovating the tower will save the City of Fort Worth, including taxpayers, over $100 million compared to the initial plan to build a new City Hall. The purchase will also allow the City to move into the building sooner than the initial 2028 projection. JLL’s Todd Burnette, Pat McDowell, David Berzina, and John Davidson successfully negotiated the building’s sale.

Purchasing and renovating the Tower will save the City over $100M compared to building a new City Hall and will allow the city to move into the building in 2022, 6 years sooner than originally planned.

Lincoln Property Company (LPC) has recently signed over 30,000 square feet of leases at One Glen Lakes. LPC took over leasing and management of the property in March 2020. The property’s owner, ICM Asset Management, is also in the midst of overhauling the building’s amenities and common areas and adding speculative suites. Located just east of Central Expressway at 8140 Walnut Hill Lane, One Glen Lakes is a 10-story, Class-A office building totaling 169,000 square feet. The largest new lease signed in the midst of Covid, at 17,448 square feet, is Lincoln Harris CSG.

A 20,000 square foot office building, designed by FBT Architects, will be built at 4215 West Lovers Lane in Dallas. Construction on the $3 million development will begin in May and is expected to be completed by May 2022.

Blu-Dot Furniture has filed a permit to build a 9,775 square foot office at 4441 McKinney Ave. in Dallas. Construction on the $1 million building will begin in September and end in April 2022. GFF, Inc will design the one-story office and storage center.

Children’s Medical Center Plano has filed a permit to build a 9,000 square foot building at 7601 Preston Road. Construction on the $99 million development will bend in February 2022. Parkhill | Schrickel Rollins will design the project

Structure Commercial has sold the 118,213-square-foot shopping center, the Pizza Hut, two other outparcels, and a 40,000-square-foot pad, located at 635 and Oates Drive in Mesquite, to an undisclosed investor. Retail Plaza had been trying to sell or lease the center for years, with the empty 47,000 square foot grocery store.

A 15,075 square foot retail building is being added to the Town Centre at Headington Heights at 1620 N. Hardin Blvd. in Mckinney. The $1,7 million project, designed by MCP Architects, PLLC,  will undergo construction from April to December. 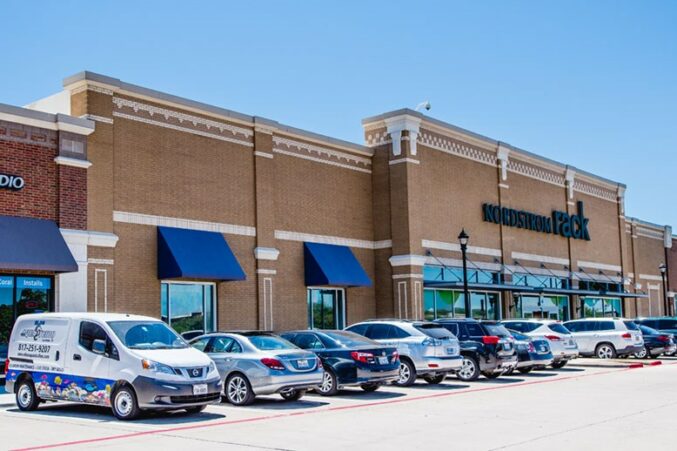 Freedom Dental has filed a permit to build a 4,500 square foot office in Justin. RSG Engineering will design the $1 million project, and construction is slated to begin this September.