Enjoy unlimited access to all of our incredible journalism, in print and digital.
Subscribe Now
Advertisement
Retail

It was the biggest disruption of retail seen in the last 30 years, Weitzman reports. But the region is still an economic dynamo.
By Bianca R. Montes | January 19, 2021|12:47 pm
Advertisement
Dallas-Fort Worth’s retail market took a dip last year following one of the most impressive markets in four decades.

Following seven consecutive years of near-record occupancy, it was almost guaranteed that 2020 would follow suit. Back then, restaurants were king, construction was on fire, and retail stability was seen throughout DFW. Then COVID happened.

The pandemic forced brick and mortar retail to close its doors and try to pivot and adapt as a global pandemic changed the way the world shopped, representing the biggest retail disruption seen in the last 30 years, experts said at the annual Weitzman conference. COVID’s impact on retail escalated trends, seeding the field for new retail concepts, simultaneously accelerated the failure of already-weak retail concepts.

“We saw years of change unfold over nine months.

“That jump in vacancy helped DFW set a record that we hope we never see again,” said Weitzman Executive Managing Director Bob Young during a virtual unveiling of the report last week. “Twenty-Twenty was DFW’s worst net leasing year ever. It was a year that challenged our industry and taught us to pivot faster than we ever thought we could. We saw years of change unfold over nine months.”

For the past 31 years, Weitzman has presented its annual retail forecast. And even in the worst cycles, they have reported positive net leasing.

Net leasing is measured by absorption. The absorption formula measures net leasing demand by determining the net change in occupancy for existing plus new space during the survey period. Because of the sharp increase in total vacant square footage last year, and at a time of low construction, DFW absorption turned negative for the first time ever in 2020.

Despite the increase in vacancy, DFW retail occupancy weathered the storm thanks in part to increasing demand for existing space Young told a virtual audience at Weitzman’s 2021 Retail Forecast.

To compile the report, each year, Weitzman completes a comprehensive review of DFW’s total retail market inventory of about 200.4 million square feet in projects with 25,000 square feet or more (1,428 shopping centers).

Its survey revealed that mall occupancy dropped 4 percent to 87.5 percent in 2020 (four vacant anchors created nearly 520,000-square-feet of vacant space, and two more key vacancies will present when Macy’s closes in Lewisville and Denton later this year). Pre-pandemic, malls were already challenged, and to remain relevant in the face of these challenging times, successful malls have re-mapped, re-merchandised, and retooled.

For example, impactful redevelopment and a strong digital program resulted in Golden Triangle Mall in Denton reporting more than 100,000-square-feet of new leases for home furnishings, new restaurant concepts with outdoor patios, and even a fitness center in this past year.

Community centers also dropped to 93.2 percent from 94.4 percent in 2019 but remained relatively healthy thanks to grocery stores, Targets, and Walmarts.

Pandemic or not, neighborhood centers performed well in 2020. In fact, 2020 is only the second time in three decades that this category exceeded 90 percent occupied. Typically unanchored centers of 25,000 square feet to 100,000 square feet (think internet resistant businesses like restaurants, medical, beauty, and fitness tenants), Young said this category benefited from shoppers’ preference for open-air centers that allow easy access for things like curbside and drive-thrus.

The Power Center category saw vacancy increase by more than 700,000 square feet (the largest vacancy occurred in Northeast Dallas when JCPenney closed its 100,000-square-foot store at Timber Creek Crossing). However, occupancy in this category because anchor tenants tend to be furniture stores, which experienced strong sales as remote-work and stay-at-home orders inspired a focus on home improvements. In fact, Weitzman reported that 2020 saw many power retail anchors like Home Depot achieve double-digit sales gains through initiatives such as curbside and ship-from-store order fulfillment.

Deals like the Tom Thumb grocery store opening in street-level space in The Gabriela in Old East Dallas were beneficial to the category, Young said. 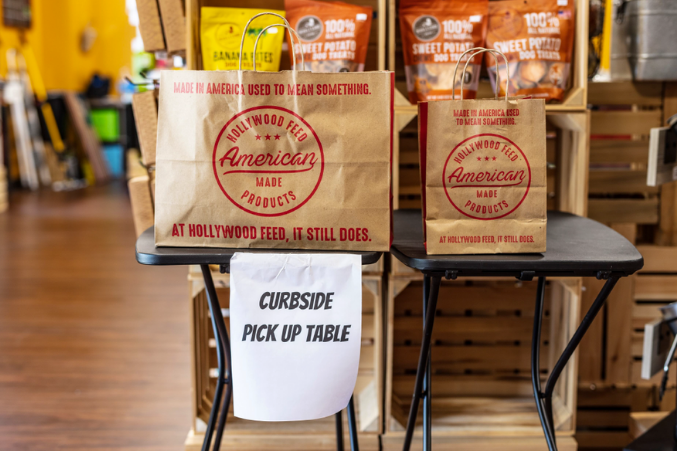 “That’s basically six years of growth in less than nine months,” Young said. “Retailers had to accelerate just as fast if they wanted to survive. And landlords and retailers had to partner to ensure their mutual survival. Many independents didn’t have an online presence, and in a world with reduced foot traffic, they were completely dark.”

Weitzman combated this early by looking through its portfolio of 3,500 tenants and contacting those without an online presence and using its marketing team to turn on the lights and get them online basically. For example, a mom-and-pop Greek restaurant in one of its North Dallas shopping centers was hit hard by the pandemic. Things were made worse by their lack of digital presence. Weitzman launched a digital campaign to build traffic and coached the tenant on how to establish themselves through social media. The result: The restaurant’s year-over-year sales increased by more than 20 percent.

The good news is that retail is critical to society and the economy. Personal consumption is 70 percent of our GDP, and two drivers, Groceries (which represents about 3 percent of GDP) and restaurants (which represent 4 percent), will likely never be fully replaced by online.

“The new normal is not going to be everything sold online,” said Peter Linneman, principal of Linneman Associates and former longtime professor of real estate at the Wharton School of Business at the University of Pennsylvania.

For example, he pointed to the business model of online grocery shopping. The whole “if you don’t want it, just keep it because it is too expensive to ship back” model is unsustainable. “The retailers lost a fortune. They will not do it forever.”

Linneman, who was interviewed by Herb Weitzman, executive chairman of his namesake Dallas-based commercial real estate firm, during the event, also said online will never be able to replace experiential retail.

When looking at the 50 major chains that filed bankruptcy in 2020 (such as Pier 1, Tuesday Morning, 24 Hour Fitness, Norman Taylor, Brooks Brothers, California Pizza Kitchen, Forever 21, and Jamboree), Linneman said it is important to break retail sectors into categories. For example, he said, “it was only a matter of when for a Brooks Brothers to go out of business. Two-thirds [of those who filed bankruptcy] were already going to go out of business no matter what happened.

“The ones that are more tragic are not them. They are the restaurants, the shops, the nail salons, and fitness centers that weren’t going to go out of business. They will come back but with a different name, not Pete’s Pizza but maybe Herb’s Pizza.”

What people are missing when looking at the growth seen in e-commerce sales in 2020 is not that it went up six percent, but that it only went up 6 percent, Linneman said.

“Wouldnt you like to think if all my competition closed, I’d do better,” he asked. “Why didn’t it take 100 percent? We saw only about 6 percent swing when it wasn’t open to competition.”

A look at construction in DFW

Looking forward, Linneman said his biggest concern with retail is not online or COVID.

“The biggest problem is the state and local taxes. State and local budgets have holes almost everywhere. That tax component will probably go up, even in fees. That is a big near-term struggle for retail because it will impact the cost,” he said. “There is going to be a shut down in construction. That is going to dampen costs. Overall, the best thing is that we are affordable compared to the rest of the country—housing, office buildings, taxes, through and through, and that is the greatest asset you have.

“The biggest risk for Texas is complacency and killing the golden goose. And taking for granted how competitive we are. Short of that, you are a dynamo of economic activity.”

Even in a pandemic, Texas is a good place to be.

Texas leads the nation in population growth (one-third of new residents moved to DFW last year), and DFW also reported the hottest home construction market in more than a decade. And while DFW lost jobs, Weitzman’s outlook as we advance is good. Job growth recovers have reduced 2020 losses, making DFW the nation’s Top 3 market for jobs.