Although Dallas city staff say they are making strides in a deep backlog of residential building permits, city council members and developers suggest that the issue is just the tip of the iceberg and highlights a broken system riddled with inefficiencies. The situation has some homebuilders promising to never do business in Dallas again.

In September, we reported that Dallas had nearly 900 permit applications waiting to be processed. Inferior technology unable to meet the demands of the permits’ online processing was largely to blame for the backlog; city staff told D CEO. What once took one to three days to issue was now taking more than two months—putting stress on local developers, and worse, cutting deep into their profits.

During a recent Economic Development meeting, Atkins and other council members pressed City Manager T.C. Broadnax and Sustainable Development and Construction Director Kris Sweckard for answers. Issues such as a lack of communication, a lack of standards, and a communication breakdown were all cited and discussed—as were questions about the situation’s impact on economic development.

“We need those projects to move through the process so we can build our tax base, build our economy,” said District 14 Council Member David Blewett. “This is a major component of what we’re looking at going into 2021 after a really tough, tough 2020. This is a big deal for the city and our economic development for 2021.”

Sweckard pointed out that city staff had put bandaids on a few immediate issues the city was facing, such as directing more resources to the pre-screening process, purchasing new computers that could handle downloads, and creating educational videos to educate developers on the online submittal process. However, the stark reality is that it is still taking 11 to 12 weeks to issue a permit. And although the city has been able to whittle down the backlog of permits from 981 to 327 (464 single-family permits to 129 in prescreen), Blewett questioned if the win was due to a holiday slowdown or actual progress.

“That’s not really as good of a look for us,” Blewett said. “We are not really ready for spring, and we are going to be right back in a problem. I think we have a long way to go.”

‘THEY DON’T WANT US HERE’

Dallas residential builders and developers have doubts about the city’s efforts. They say they are appalled by a recent decision to force developers to waive their right to the speedy delivery of permits. Dallas Builders Association Executive Director Phil Crone added that the city has asked developers to waive their rights to a state law that says any fees charged should be refunded should the city not promptly process a permit.

Hoffmann Homes founder Alan Hoffman said doing business with the city of Dallas has reached a level of disorganization that making an actual profit is nearly impossible.

Hoffman, who has several residential projects underway in Dallas, said dealing with the city on his last two projects has been “long and egregious.”

“A lot of the departments at the city are very siloed and have little or no communication back and forth,” he said. “For a developer like myself, if you are unfamiliar with the process, you are basically walking into a meat grinder.” Hoffman basically described it like this: “I feel like I am driving in my car, it’s midnights, pitch black, I have no headlights, and I am blindfolded. That is the process you walk into. There is very little guidance. And they say, ‘It is all on the website go find it.'”

Hoffman pointed to his Abode at White Rock project as a prime example of how siloed systems across city departments create unforgivable disorganization. 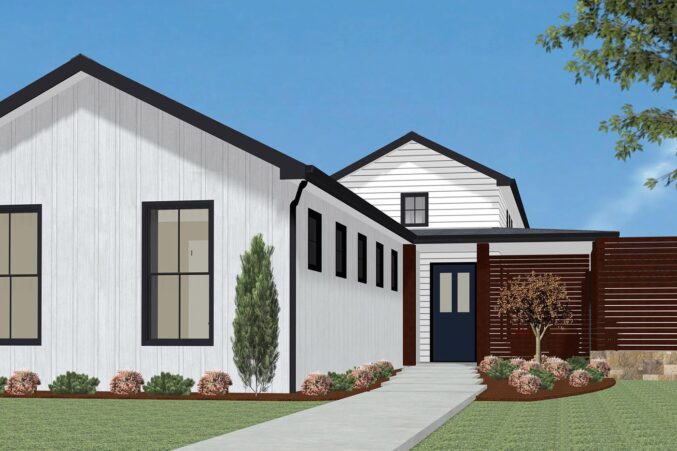 An artist’s rendering of the Hoffmann Homes design at 8824 Diceman Drive, near the Dallas Arboretum. (Dallas Builders Association)

The pocket park project took years to get off the ground—some of which was Hoffman’s own doing—but others were due to idiosyncrasies like reviewers having him resubmit drawings because they wanted him to change the word “construct” to “install”—an issue that took up six months and an additional $2,000 in fees.

At another project, a two-acre lot that was the former parking lot for Bryan Adams High School, city staff told Hoffman that he needed a move-out notice from the former tenant to set up utilities.

“It was a brand new lot,” he said. “I spent [$250,000] putting in water and utilities with their department, and it was the wrong address.” The issue: “The clock starts ticking as taxable lots and the tax rate increases, but I can’t build on it until August cause I don’t have a certificate of approval.

“You cannot do affordable housing if you are going to make developers wait for years to get a project done.”

Hoffman said the city’s attitude toward residential developers sends a message that “they don’t want us here,” which counteracts claims that the city values low cost and green developments like his Abode at White Rock project.

“You cannot do affordable housing if you are going to make developers wait for years to get a project done,” he said.

And although Hoffman would not reveal the specific amount of money he lost on the projects due to the city’s issues, he allows that it was substantial—enough that has him questioning if he’ll ever do a project in Dallas again.

“And they ultimately don’t care,” Hoffman says about city staff. “They think we have money falling out of our pockets, and they can treat us badly. They can give me land free in the city, and I still could not make it work.

“Dallas used to be a can-do city. It used to be called the city that works. There has to be a cultural shift in the department. We are viewed as the enemy, and we are bringing the value.”

CHANGES IN THE WORKS

Long before COVID-19 caused Dallas to close its offices, Sweckard said there was an awareness that online system they use to process permits, ProjectDox, didn’t work. The city had somewhat integrated the system a year earlier, and it basically worked for the 20 percent of applications that went through the online portal.

“They were rolling it out slowly, and then the pandemic hit and had to shift to a program that was not ready completely,” he said.

But, that electronic plan review system was also a lifesaver for one of the few real estate markets doing well during the pandemic.

“The system itself was not ready; there was no automatic integration between ProjectDox and the Electronic Plan Review system and our processing backbone system. That was a manual interface that we were doing, and we were able to handle that because 20 percent of our submissions were electronic. When we ramped up overnight to 90 percent, and we had to do that interface manually, that took a lot of staff time. And it’s still taking us a lot of staff time. That has not been resolved yet.”

However, Sweckard highlighted some changes the department had made—and is continuing to make—to move forward.

For example, more staff were added to work on the permit process’s pre-screen portion, which has allowed for faster processing. A big change that Sweckard also announced focused on how the city handled applications, in pre-screen, that were incomplete. Previously, the city would move an application that had even a small issue to the back of the queue, adding months to the process.

Now, Sweckard said if the issue can be resolved relatively quickly, staff will call the applicant and try to remedy the problem rather than kick the permit out of the system and force the builder to the back of the line. Council members asked if there was some threshold for identifying minor issues; there isn’t.

The city also made instructional videos to help developers and builders better navigate the online process. They made the platting process available online and created a concierge service for affordable housing projects—they plan to hire staff in January.

The city plans for a $1 million independent efficiency study (backed by a franchise fee) of the building permit office at the Oak Cliff Municipal Center to evaluate the department in the long term. Sweckard said bids from seven vendors are being reviewed, and presentations will be scheduled for the coming months.

Additionally, the city is replacing its 15-year-old outdated permitting system. Four vendors have made proposals for the project, which Sweckard said will be expensive and take about a year to bring about massive change to the department.