Transit Oriented Development, or TOD, is not a new concept. Simply put, it’s the creation of compact, walkable, mixed-use communities centered around high-quality public transportation systems. A plethora of TOD case studies exist here and nationally, and the City of Dallas and DART have already created a handful of policies to encourage higher and better uses in and around DART’s rail stations.

Despite its growth, TOD’s potential is still largely untapped around DART’s rail stations, major bus transfer facilities, and secondary destinations. For every CityLine or Mockingbird Station, we have several other stations and stops that remain primarily surface parking.

The most potential for TOD centers around the immediate adjacent blocks around each station. In the urban design world, we often measure TOD potential through quarter-mile radius’s around stations and evaluate the holding capacity of density and development that remains untapped. This quarter-mile radius is often tied to urban quality of life concepts such as the “15-minute city” or walkability assumptions.

The 15-minute city is a concept that implies a reduction in the access radius for an individual’s daily needs. The primary expected mode of transport often derives the distance that is covered by those 15 minutes, whether it’s walking, cycling, or even driving. Anne Hidalgo, the mayor of Paris, France since 2014, recently implemented her own 15-minute city policy, which has received global acclaim. The policy says that residents can have all their needs met within 15 minutes of their doorstep. 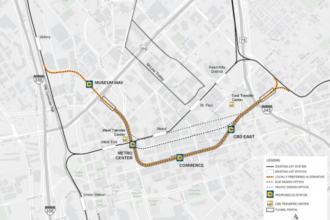 D2’s current planned route runs from near Victory Park and follows Field southbound to Commerce. From there, it heads east through downtown, cutting under 345, onto northbound Good Latimer. It is expected to cost $1.4 billion.

What does a 15-minute city in Dallas mean for TOD going forward, especially with the potential for new major stations through the D2 Subway project and the new Silver Line? AECOM’s Planning + Urbanism Design team in Dallas has been investigating these questions across the DFW region and nationally in-depth for the last several years and see a few major trends that inform our thinking about the future of TOD in Dallas.

Rather than centering transit-supportive densities and infrastructure around major rail stations, the primary impetus should be on expanding and threading a broad range of multi-modal uses across an entire district. The district itself serves as a mechanism to facilitate transit usage, modal shifts, and the densities often associated with TOD. One can expand the idea of a transit hub from a single location into a series of city blocks, using better wayfinding, placemaking, urban design, and other transportation modes to make the entire neighborhood feel like a rail station.

Second, despite their setbacks during COVID-19, new emerging mobility technologies are likely here to stay and greatly expand the traditional spatial boundaries of TOD. A traditional quarter-mile radius or 15-minute city concept in Dallas will look very different even in five years.

Whether it’s electric pedal assist bikes or more ride-sharing options, people can go further and faster in the core of Dallas easier than ever before without a car. That means expanding our TOD-associated policies and infrastructure investment to a half-mile, full-mile, or even beyond in some cases.

And finally, by expanding our TOD horizons by thinking about bigger districts with more transit-supportive infrastructure and densities, it means we can begin thinking about value capture and TOD- joint development in a more aggressive manner.

Joint development between a transit agency, city, and the private sector is one of the best ways to ensure seamless transit integration into an urban environment. With a bigger capture radius, which more accurately reflects the influence area and net benefit of these investments, more funding options, and creative delivery models can exist for long-term planning. This is critical in times where all parties are more financially constrained than ever before. This includes more options to fund and implement affordable housing, small incremental development, and neighborhood-scale mobility hubs instead of strictly adding large scale development projects at the station.

Through AECOM’s hard work on TOD planning across the region, including Richardson, Plano, and Dallas, it’s apparent that everyone recognizes how immense an opportunity TOD represents in redefining what Dallas urbanism means. Even still, we think the opportunity is still underestimated and constrained by a too-small definition.

It’s time to think, plan, and implement bigger, and TOD can make it possible to live a beautiful, lower-stress life without complete dependence on a car for mobility and survival.