Long before the COVID-19 pandemic had businesses questioning what the new standard would look like for office environments, leadership at Katten Muchin Rosenman was discussing what the build-out of its new two-floor offices in Uptown Dallas’ Park District project would look like.

The Chicago-based international legal firm moved its Dallas office out of its old space at Comerica Bank Tower and into Park District’s PwC Tower mere weeks before shelter-in-place orders went out. Luckily, Managing Partner Mark Solomon said, being in tune with the future of workspaces allowed them to quickly adapt to social distancing guidelines and ensure a safe work environment. 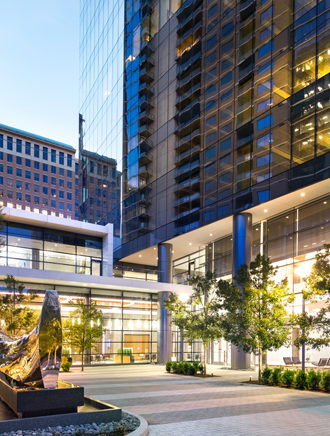 Katten now occupies the entire tenth and eleventh floors, a total of 56,340 square feet, at the tower developed by Trammell Crow Company and MetLife Investment Management.

“For us, it was an opportunity to set the reset button,” Solomon said. “We saw this space, and we said, ‘let’s make a statement. Let’s have the ability to do whatever we want here.'”

In February 2018, Katten expanded its presence in Texas with a group of seven new corporate partners focused mainly on private equity work and based in Dallas, where many of the firm’s clients do business. Today, the office has nearly 50 attorneys practicing not only in PE but in the areas of finance, M&A, health care, white collar, real estate, corporate, and litigation. 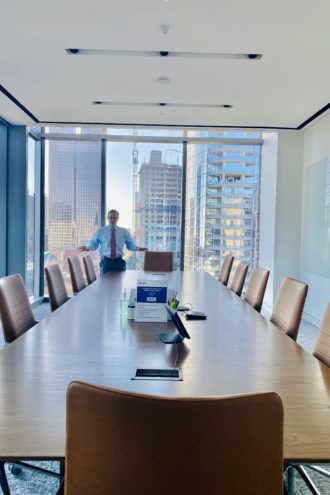 Solomon said when they began the design process with Gensler, they looked at a few adjectives to describe the firm—sophisticated, creative, unpretentious, collegial, and transparent came to mind.

“We wanted to have a place where we could bring people in, and they say, ‘hey, I want to work here,'” Solomon told D CEO during a pre-COVID-19 tour of the space. “I like coming to work. I walk around. I feel the energy. I see people. It’s terrific!”

Some of the design aspects that address the changing office include wider hallways, a variety of workspaces, and Skywall retractable glass walls that can either open up space or define it. Modular tables allow the firm to adapt, “All this stuff can be moved, we can keep every room empty in a heartbeat,” Solomon said. “It’s great.”

The flexible layout helps people avoid close interaction by allowing foot traffic to flow in one direction and people to sit six feet apart in offices or common areas. State-of-the-art audiovisual systems enhance remote collaboration with attorneys, business professionals, and clients who continue to work from a distance. 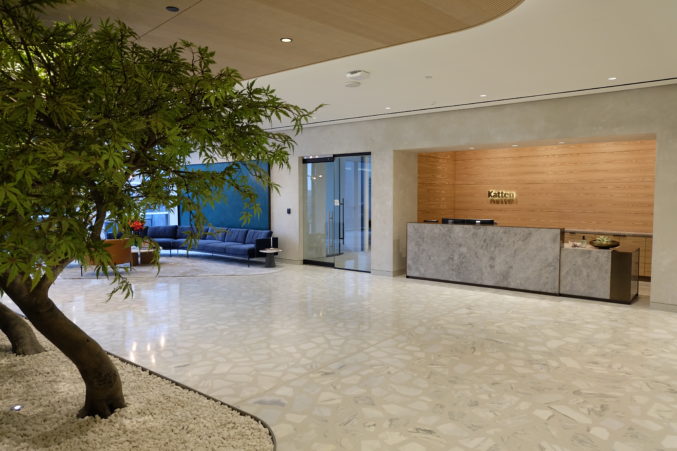 Overlooking Klyde Warren Park, designers looked to incorporate the park in the build. The bright office even has a tree in its lobby.

Also, the elements of nature incorporated in the office, such as Japanese maple trees, integrated planters, and panoramic park views, offer a calming, therapeutic setting, which is vital during today’s increasingly difficult times, Solomon said. 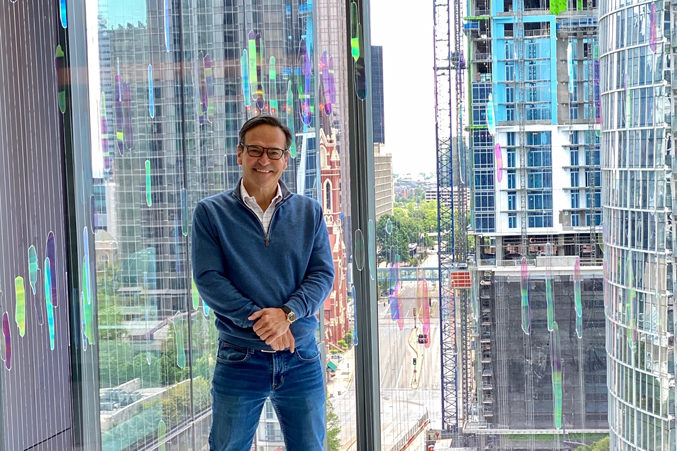 Katten Managing Partner Mark Solomon stands in front of a Paula Crown piece at the new office. One of the things he loves about the artwork is the way it makes the light “dance on the floor” and down the hallways of the offices.

Art also was an important aspect of the design. Solomon said his favorite piece is by local artist Paula Crown called “Freezing Rain.” One of the things he loves about the artwork is the way it makes the light “dance on the floor” and down the hallways of the offices.

“We want to be a presence,” Solomon said. “And there’s a lot of ways to do it. We’re doing great work, we’re growing fast, and we’re doing great things. The thought was, let’s make this space the type of place where whether you come in or you’re outside, you’ll be asking, ‘what’s going on there.'”

While Solomon said his office has always had a policy that allows employees to work from home, he also wanted to give them a reason to come to the office.

“It adds so much to the environment in the office when we see people here every day,” he said. “If you’re building a culture, you want people to spend time together as much as you can, yeah, I’m still giving the flexibility to work from home. So it’s not like demanding it. It’s great. And it works.