Twelve Cowboys Way, a 17-story residential tower that overlooks the 91-acre campus of the Dallas Cowboys World Headquarters and The Star in Frisco, may be slated to open this February. Still, the doors are already open for sneak peeks. The project is a joint venture between Dallas Cowboys owner Jerry Jones and Dallas developer Columbus Realty, which is owned by former players Roger Staubach and Robert Shaw. 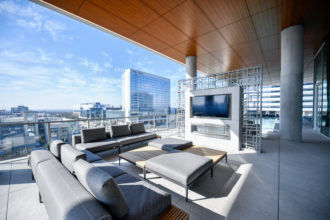 We are so pleased to see the progress Twelve Cowboys Way has made over this past year and are thrilled to show off the development up close to those interested in becoming a future resident here at The Star,” Jones said. “These preview tours will allow our potential residents to truly picture themselves in their new home and feel what it’s like to be part of the Cowboys family.”

The residential tower holds 158 units with one, two, and three-bedroom floor plan options. All penthouse units are leased, and there is limited availability for select floor plans, with unit sizes ranging from more than 850 to 2,600 square feet and starting at $2,700 per month. 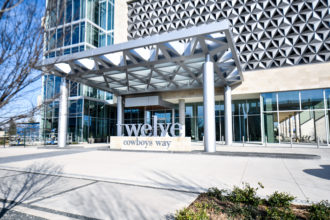 Resident amenities also include membership to the exclusive Cowboys Club, designated day(s) to watch the Cowboys practice at The Star, luxury travel options to AT&T Stadium for Cowboys games, access to Cowboys Fit, a 24-hour Concierge and being within walking distance to over 40 restaurants and shops.

Preview tours of Twelve Cowboys Way are by appointment only and must be booked at www.TwelveCowboysWay.com or by calling 214-469-0145.