Optima Business Park, a 200,000 square foot office complex in Northwest Dallas that once served as the headquarters for cosmetic company Mary Kay, has a new owner.

“When Mary Kay designed the properties, she went all the way,” Ricchi Group CEO Leobardo Trevino said. “The architecture is very unique, and it flows well. The buildings were completely remodeled in the early 2000s, so all the systems and mechanics are in great shape. We’re going to take it a step above and make it a true Class A asset.” 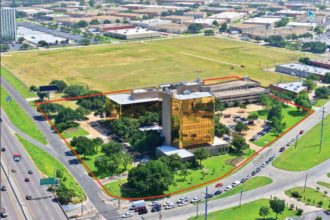 Optima Business Park will be rebranded as Eldorado Towers and include several homages to its history as Mary Kay’s headquarters.

Trevino said they would rebrand the property as Eldorado Towers and include several homages to its history as Mary Kay’s headquarters.

“We’re history buffs—we used to own the Statler—so we like to honor the history of a building,” he said. “We’re going to incorporate some of Mary Kay’s assets, with quotes from her. We’re going to permanently block off Mary Kay’s parking spot with pink paint and a sign with a photo of the car she used to drive. Meanwhile, we’re putting in a gym, a lounge, and redoing the property inside and out. We believe it will be a great addition to the area.”

Lew Wood of Pan American Group LLC represented the Ricchi Group in the purchase of the office complex.