Early on, Craig Hall had a clear vision of what downtown Dallas’ first Arts District Hotel would embody. Not only would it be timeless and sophisticated in looks, but also flow seamlessly between its interiors and exteriors surrounded by Pritzker Prize-winning architecture and celebrated arts venues. 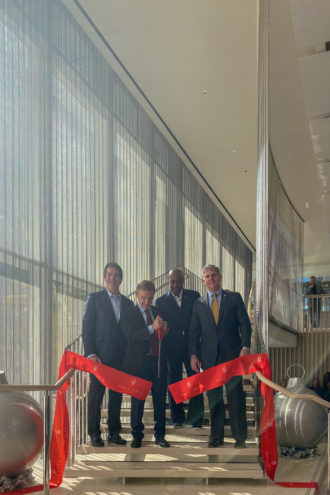 “This is the end of a long journey,” Hall said Tuesday, as he cut a red ribbon strewn across a stairwell in the lobby of what has become HALL Arts Hotel.

Nestled at the corner of Ross Avenue and Leonard Street and developed by Hall and his wife Kathryn, the 183-room 10-story luxury hotel is part of a $250 million development that includes a nearby high-rise condo tower and is expected to open in spring of 2020.

Designed by HKS Architects with interiors by Bentel & Bentel, the hotel offers 19 Dallas Arts District-inspired suites, a rooftop pool, and a state-of-the-art fitness center. Each room reflects the property’s sophisticated style with luxe amenities such as Frette linens and Natura Bissé bath products by La Bottega.

Architect Dustin Siegrist with HKS told D CEO that the building was heavily influenced by its neighbors, almost taking on the look of a museum. From a design standpoint, he said the hotel embodies what is called “four front doors,” meaning that every side of the hotel is a front door into the building. 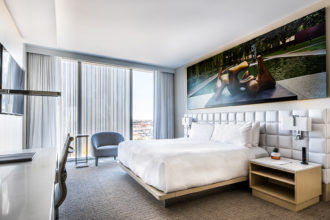 The hotel has 19 different types of rooms.

In what easily can be described as a glass jewelry box filled with art, the bespoke space is complete with an extensive collection that highlights an array of mediums, all in contrast to the building’s soft, neutral hues and floor-to-ceiling windows.

The property collaborated with the former chief curator of the U.S. Department of State’s ‘Arts in Embassies’ Program Virginia Shore and longtime art advocate and HALL Group curator Patricia Meadows to curate a collection of specially commissioned pieces.

Highlights in the collection include a piece at the hotel entrance by Alison Watt, a contemporary Scottish painter known for her realistic depiction of drapery and figures; Spencer Finch’s “Asteroid,” an ethereal light installation hanging overhead in the dining room that visualizes Finch’s experience of natural phenomena; Lava Thomas’s “Resistance Reverb: Movements 1 & 2” in the lobby’s entryway, a nod to the historical use of tambourines by protestors and advocates during times of activism and, through both the color and instrument, depict the Women’s Marches in 2017; and works by Antonius-Tín Bui, a queer, gender-nonbinary, Vietnamese-American artist based in Houston whose work explores the topics of intergenerational trauma, self-identification and how race relations affect culture. 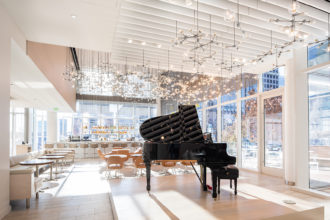 Crescent Hotels and Resorts is operating the hotel, which has already had its soft opening.

Dryer brings over 20 years of experience working at culinary destinations both locally and across the country, including Fearing’s inside The Ritz-Carlton, Dallas. Dreyer’s menus take inspiration from Napa Valley, offering coastal dishes of simple, farm-fresh ingredients that are both informal and elegant.

Come January, a weekend brunch and happy hour will be introduced.