Ben Brewer says Deep Ellum is easily one of Dallas’ most energized neighborhoods. The Hines managing director is behind a new  16-story, mixed-use building behind famed music venue The Bomb Factory. Called The Stack, the project is a collaboration with Dallas’ Westdale Real Estate (the group developing a high-rise that will house thousands of Uber employees) and Canada’s Ivanhoe Cambridge.

Deep Ellum has seen waves of redevelopment over the past several decades. A surge of new restaurant and retail, a thousand new apartments in three separate projects, and the three-building Epic development at its western edge anchor are transforming the once nearly vacant strip of Dallas into a thriving community.

“We believed in the positive trajectory of Deep Ellum for some time as companies have been making influential improvements in the neighborhood,” Brewer told D CEO.

Construction of The Stack, 2700 Commerce St., should begin immediately and is scheduled for completion in the second quarter of 2022. It is expected to have 200,000 square feet of office space and 15,000 square feet of ground-floor retail.

Brewer said talks are already underway with a variety of users for the space, but declined to provide specifics on potential tenants. 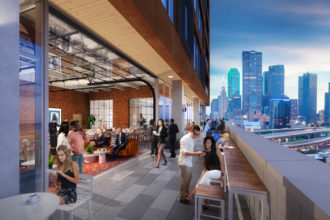 An upper floor terrace in the building will overlook downtown Dallas.

“The Stack will attract tenants with a progressive mindset that are seeking a vibrant and authentic location to recruit, attract, and retain the top talent for their businesses,” Brewer said.

Deep Ellum is known for brick-layered industrial architecture, mural-clad streetscapes, and a walkable environment; developers worked with Dallas architect 5G Studio Collaborative to create a new office building that will blend with the fabric of the neighborhood with its brick facade and metal elements.

The team is targeting both LEED Core and WELL certification—and is one of the first new construction projects in Dallas to do so.

Tenant amenities will include electric car (and potentially scooter) charging stations, an expansive 10th-floor amenity terrace overlooking the Dallas skyline, a fitness center, bicycle storage, a coffee and cocktail lounge, concierge package delivery, and more. The building also will feature a 640-space parking garage that can be used for retail and restaurant visitors at night and on the weekends.

“This development represents a continuation of Westdale’s intent to partner with best-in-class real estate developers and investors to create iconic office and retail space in this most unique urban neighborhood,” said Joe Beard, the company’s president and CEO.