One of the most recognizable and historic buildings in Fort Worth is slated to become a full-service signature hotel.

The W.T. Waggoner Building, 810 Houston St., is set to become the new Sandman Signature Hotel–the second hotel of its kind in the United States. Sandland Signature Plano-Frisco opened in 2018.

Pitched to support Fort Worth’s Economic Development Strategic Plan to turn downtown Forth worth into a premier mixed-use business district, Northland has requested assistance with up to $8 million in costs for public improvements, such as landscaping, utilities, and historic preservation and restoration.

Such improvements will be reimbursed by the city’s Lancaster Tax Incremental Financing District (TIF), so long as performance requirements are met. The TIF reimbursement will not take place until the hotel has been open for two years.

Robert Sturns, director of economic development for the City of Fort Worth, says he is thrilled with Northland’s commitment to preserving the iconic building, “This project celebrates Fort Worth’s past while still supporting the current and future growth of downtown, and we look forward to the Sandman Signature Hotel being part of our growing community.” 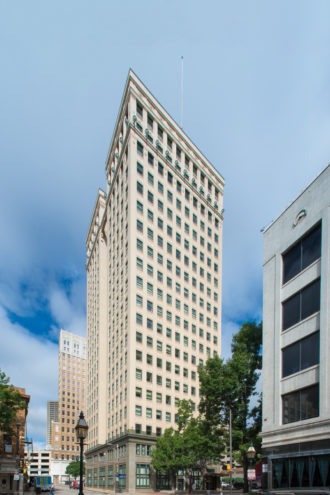 The W.T. Waggoner Building was originally built for William Thomas Waggoner, owner of the Waggoner Ranch.

This project will add another full-service hotel to downtown Fort Worth’s growing lineup, which will help support bigger and better events at the city’s major venues like the Fort Worth Convention Center.

The building is listed on the National Register of Historic Places and was most recently used as office space by XTO Energy before being purchased last year by Northland Properties.

Gaglardi’s company operates more than 50 hotels in Canada under the Sandman and Sutton Place brands.

The new hotel will boast a minimum of 240 rooms and 1,500 square feet of meeting space.

The ground floor bank and elevator lobby of the Chicago-style brick and stone building were restored in 2003 to match the original finishes that date back to 1920 when the building’s first tenant, Continental National Bank, occupied the space.

The building’s U-shape floor plan allows for abundant natural light, which could help if the building were to be repositioned to another use. The sale also includes the adjacent surface parking lot–one of (if not the only) remaining undeveloped lots in downtown Fort Worth.

“We’re thrilled that Northland Properties is committed to preserving such an iconic Fort Worth building,” says Robert Sturns, director of economic development for the City of Fort Worth. “This project celebrates Fort Worth’s past while still supporting the current and future growth of downtown, and we look forward to the Sandman Signature Hotel being part of our growing community.”